As we move further into spring, the effect of dry and warm conditions is becoming more prominent in the wildfire threat outlook. It's big and is likely to spread.

The National Interagency Fire Center, in Boise, Idaho, has identified practically the entire Central and Southern Plains, from the Nebraska-South Dakota line south to the Rio Grande Valley, in Texas, a portion of southern New Mexico and the coastal southeastern U.S. as having an above-normal risk for significant wildfire outbreak. Here's how the Fire Center describes the expected fire threat in the Plains:

"Much of the Central and Southern Plains are expected to have above-normal significant fire potential into April while persisting on the High Plains and eastern slopes of the Front Range into June. Above-normal potential is forecast in portions of south Texas and the Hill Country during March, with the westward retreat of above-normal potential in Kansas, Oklahoma and Texas following the expected green-up procession ... Additionally, there are indications for an active severe weather pattern this spring from eastern portions of the Plains into the Southeast and Ohio Valley. Critically dry and windy periods will accompany the severe weather for much of the Plains, especially the Southern and central High Plains."

Those dry and windy periods in the Texas Plains are capable of fomenting an extreme fire-prone atmospheric state known as the Southern Plains Wildfire Outbreak (SPWO) -- similar to the well-known Santa Ana winds in California, which heavily contribute to fire outbreaks during the fall season. The SPWO features strong winds with low humidity setting up in the Texas Plains. Those conditions can push fire very rapidly. The Fire Center notes multiyear drought in much of the western U.S. leads to a threatening summer for wildfires.

Fire season is already active. The first quarter of the year featured almost double the number of fires and acres burned across the U.S. compared with the 10-year average. With more than 70 percent of the continental U.S. assessed as either abnormally dry or in drought, fire potential looms as critical for months to come. 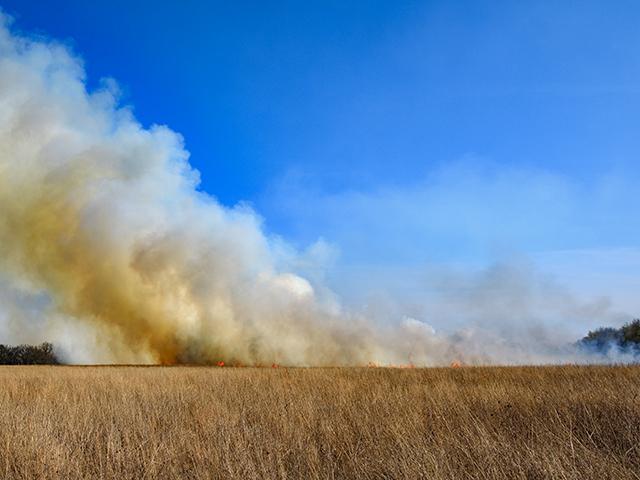