LAVISTA, Neb. (DTN) -- With the start of the summer driving season fast approaching and year-round E15 sales no longer an option, EPA's Rod Snyder said on Thursday the agency continues to work to restore those sales.

Snyder, who is the ag adviser to EPA Administrator Michael Regan and a keynote speaker at the Nebraska Ethanol Board's Emerging Issues forum in LaVista, Nebraska, told an audience of ethanol producers and farmers the agency was keenly aware the summer driving season starts on June 1.

Because of a ruling from the U.S. Court of Appeals for the District of Columbia Circuit last year, year-round E15 sales in all areas of the country ended. The court ruled the agency's action completed during the Trump administration was unlawful.

"In light of the court's action, we understand that there's tremendous interest in what else EPA can do to provide more uniform access to E15," Snyder said.

"We share that interest. While we're still early in the process, I want you to know one area in particular in which we are already spending time ... the Clean Air Act provides a mechanism for federal action to provide a parity between E15 and E10 with respect to volatility on a state-by-state basis."

Snyder said EPA is working with several states, looking at how the law could be used to restore year-round sales at least for 2022.

Specifically, he said, the Clean Air Act allows the governor of a state to file new requests for a 1-pound psi volatility waiver to allow for gasoline ethanol blends like E15 to be sold.

"This action has the potential to increase the availability to E15 in the summer months," Snyder said.

"Several Midwest states, including Gov. (Pete) Ricketts here in Nebraska, as he mentioned, had expressed interest in exploring this option with EPA, and we have already held one technical meeting with the states to begin a direct dialogue about the provision in this law. We met with the governor's staff just in the last couple of weeks to ... an immediate response to how we can actually get this done to make it happen."

Snyder said there is another EPA meeting scheduled with Ricketts' office and the governors of seven Midwest states next week.

"These conversations, I think, are actually going quite well and have been very productive, and I want you all to know this morning we are deeply interested, and Administrator Regan and I have spoken specifically about this and are deeply interested in moving this forward," Snyder said.

"We are willing to work with any state that wants to pursue this option, and we believe it has the strongest legal dependability -- under the Clean Air Act it is not something that a circuit court of appeals is likely to strike down."

With eight Midwestern states working with EPA on the issue, he said, there "seems to be a benefit in terms of the regulatory efficiency but also in the marketplace for having a multi-state coalition working together through this process.

"And so, it's not only Nebraska. It's Kansas. It's Iowa, North and South Dakota, Minnesota, Wisconsin, a number of states coming together in this conversation, which we are eager to support," Snyder said.

In addition, Snyder talked about recent calls for EPA to consider another federal waiver to allow year-round E15.

"While it is too early for me to comment on this option," he said, "please know that we are having meaningful conversations with people within the administration about how domestically produced biofuels can be a benefit during these unprecedented times.

"There are conversations in Congress as well to address this in a legislative manner, and we are having conversations with the House and Senate at the same time."

During his keynote speech at the forum, Nebraska Gov. Ricketts said there needs to be more interest coming from members of Congress to find a permanent solution to allowing year-round E15 and expanding its market.

"As you know, under the Trump administration, we finally got the approval from the EPA to do E15 sales all year long to avoid some of the marketing confusion and of course how to proceed...," Ricketts said.

"And then, in July of last year, we got that really bad ruling from the DC Circuit Court saying the EPA acted improperly. Changing that in law should be a no-brainer for our Congress right now. We're thinking about how do we make sure we are strong and how we can help our allies abroad. We should have been doing E15 all year round."

Ricketts said the Biden administration so far has "ignored" the ethanol industry and the greenhouse gas reduction benefits an expansion of the industry could offer.

"What they're missing is we have a way to start reducing carbon emissions today if we focus on higher blends of ethanol."

"But if you combine E30 with that carbon sequestration, now you have a vehicle that is, well to wheel, at the same carbon footprint as electric," he said. 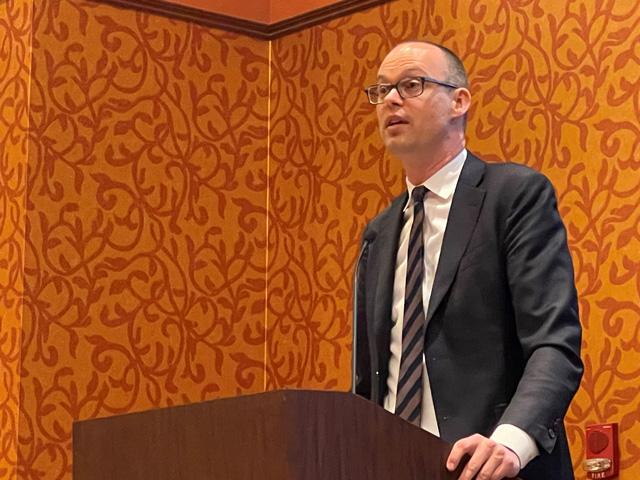