Those cold Pacific waters alter the jet stream notably in North America in the spring, showing a stronger north-to-south track through the middle of the contiguous U.S., specifically the Great Plains and Midwest. That increases the potential for severe weather outbreaks. Tornado occurrence in general shows more frequent development in seasons with La Nina in effect.

Precipitation shows a big contrast from west to east. The eastern Midwest through the Northeast, along with the Pacific Northwest coast, have strong signals for above-normal amounts. The stormy characteristic of La Nina brings the prospect of heavy, flooding rainstorms into play. Elsewhere, the pattern turns drier. This is a concern in the year following sharply lower crop harvests in crops like spring wheat and durum because of drought.

La Nina events can be lingering inhabitants not fading and moving out on a given schedule. And, even though this La Nina is fairly weak relative to other events, it's still influencing the atmospheric patterns for the 2022 crop season.

Here are the regional spring forecasts:

Expect above-normal temperatures and a big difference in precipitation across the region. The eastern half -- east of the Mississippi River -- is in line for above to much-above normal precipitation. It's a different story west of the Mississippi, with mostly below-normal precipitation in store. As a result, fieldwork prospects could have some big contrasts, with drier soils in the western Midwest warming faster and offering earlier progress than eastern-Midwest areas, where heavier precipitation could slow progress. The threat of severe storms and heavy rain events is also present in the higher-precipitation framework for the eastern Midwest. We have seen more occasions of rain coming down in buckets rather than garden-variety showers.

An outlook for above-normal temperatures and below-normal precipitation summarizes the region's forecast. This trend continues the typical response to the influence of La Nina. Soil moisture for winter wheat, pasture and hay looks unfavorable with these conditions. Given the dryness that has been in place and the forecast, there is also the prospect of some winter wheat acreage abandonment. Irrigation management will also be challenging; producers may have to consider water allocation early in the season just to germinate crops. Winds are expected in general to be stronger than average, which indicates a heightened threat of fire outbreaks.

Growers can anticipate near- to above-normal temperatures and mainly below-normal precipitation. Drought conditions in the region are highly variable coming out of winter; eastern areas have either minimal or no drought, with severe to extreme drought in western areas. This contrast may carry through the growing season and bring up some significant questions about whether the moisture supply and availability will support additional fertilizer or spray application.

Widespread above-normal temperatures are indicated for the region. Precipitation indications are varied; the Upper Delta has a near- to above-normal precipitation trend, sharing in the increased storm activity pattern in the eastern Midwest. The Lower Delta is drier, which is already in severe drought coming out of winter.

A warm and dry pattern with above-normal temperatures and below-normal precipitation is on the doorstep for the Gulf Coast this spring. Storm tracks have been absent during much of the winter, which has led to notably drier conditions than a year ago, with drought in effect. The upper air pattern does not offer much potential activity, either, with high-pressure dominance during the season.

Below-normal precipitation is featured for the entire region. Temperatures have a mainly above-normal trend except for the Florida peninsula, where values may approach the normal range. Drought development is likely in coastal areas. Interior locales that came through the winter season dry may get some benefit from a more active storm pattern over the eastern Midwest.

The temperature pattern looks to be above normal for almost the entire region except for the far northern portion. Precipitation has a strong above-normal signal, bringing a note of caution for possible fieldwork and planting delays along with a risk of flooding because of the heavier rain chances.

The region returns to a warm and dry trend. Drought easing that occurred due to heavy monsoon rains last summer along with some early to midwinter storm systems will be supplanted by intensified dryness. The downtrend in surface water and groundwater supplies that has been widely noted will continue.

Near- to above-normal temperatures and mainly below-normal precipitation are in store. The region goes into spring after a disappointing winter for moisture. The end of 2021 brought heavy snow to the mountain areas. However, the balance of the winter season turned very dry, as the jet stream tracked farther north. There has been some easing of drought, but intensifying is likely as we go through the spring.

Northwest temperatures have a near- to below-normal indication. Precipitation is near to above normal. Wintertime precipitation brought some drought easing into the region, and a continued La Nina influence offers the potential for additional dryness easing before this event fades. Much of the drought easing during the winter took place in mountain locales, with little in the main farming areas. The performance of springtime systems will get close attention. Soil moisture and watershed recharging are still very much needed. 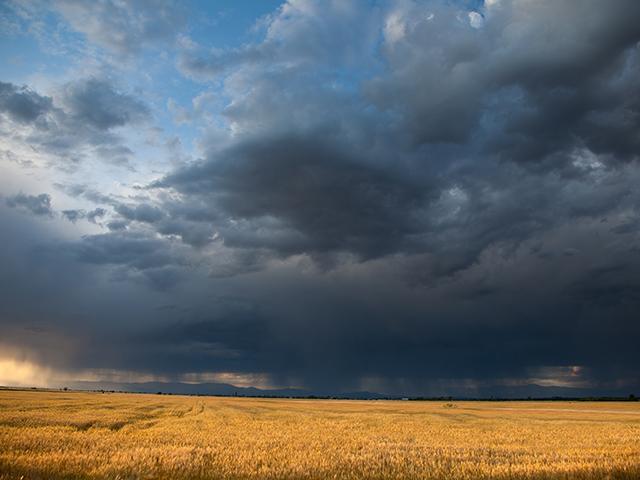