In mid-January, Steve and Shari Swenson dropped the Polywire on a 30-acre paddock of stockpiled standing cool-season forage for a pen of Angus yearlings in north-central Arkansas. Since 2011, the couple has been dedicated to extending the grazing season with overseeded small grains and a healthy clover population. Today, they can count on their 100-cow herd to graze comfortably for at least nine months of the year, and usually more, on their 360-acre operation, near Shirley.

"We were feeding some of the cow herd in late December," Steve explains. "But, we still had this stockpiled trap of fescue, cereal rye and clover standing after New Year's Day. By late February and early March, we'll have half our herd and their calves grazing again on small grains until we can shift over completely to our cool-season perennials."

Two hours to the southeast, just east of Little Rock, Matt Flynt has had similar results in expanding his grazing window for a 120-cow Simmental/Angus herd on his 450-acre warm-season bermudagrass operation. "Normally, I'll hay my cattle from Christmas through February, but by Feb. 15, I'll have yearlings grazing on cereal rye. The rest of the herd will follow about 15 to 20 days later."

"Our pastures are basically warm-season forages, bermudagrass, crabgrass and a mixture of dallisgrass and bahiagrasses, so in the fall, we're really jealous of those folks north of here with fescue pastures that thrive in cooler weather," Flynt says.

Both the Swensons and Flynt are practicing the tenets of the University of Arkansas' 300 Days Grazing System, a management outline developed a dozen years ago to reduce the time and expenses associated with feeding hay.

In a 2020 trial in the ongoing 300 Days program, Arkansas researchers carried 38 breeding-age cows on 130 acres of bermudagrass and tall fescue grass. They fed hay only 18 days, thus lowering their projected break-even cost of production by 12%.

In nearby Oklahoma, which receives less rainfall than central Arkansas, research at The Noble Foundation shows stockpiling bermudagrass-only pastures, when weather permits, can yield up to 2,500 pounds per acre of standing dry matter.

"The forage-improvement system is based on a list of management practices applicable to operations of all sizes on both cool- or warm-season grasses," says John Jennings, animal science professor and Extension forage specialist at the University of Arkansas. It features a simple five-step process to focus the producer on which practices will have the most impact on his or her individual operation and its forage base.

"Getting started is often the biggest hurdle producers face," Jennings explains. "The key is to start with one's existing forage and always plan at least one full season ahead."

The Swensons have seen both sides of the management coin. They started out 20 years ago with cattle as a first-time enterprise using unlimited grazing on pastures filled with fescue, orchardgrass, big panic grass, small stands of native prairie grasses and a 30-acre plot of bermudagrass. The weaknesses of that system became apparent as cattle selectively grazed, giving weeds and brush the advantage over forages. "Steve was having to brush hog our pastures, and we knew we had to improve efficiency. When our county agent suggested we look at the 300-day program, we were very interested," Shari says. "Adopting intensively managed rotational grazing put the cows in charge of keeping weeds down and boosted our forage use extensively," she adds.

The couple cross-fenced their property with a permanent high-tensile electric fence to create a half-dozen large paddocks, which can be further fenced with temporary Poly-wire to manage small paddocks or strip-grazing -- depending upon forage quality and availability. Their pastures feature an underground watering system of 2-inch PVC along with frost-proof concrete tanks, several tire waterers and a pair of ponds that can be configured into many temporary Poly-wire paddocks.

To start the grazing program, Steve and Shari first made sure their pastures were weed-free. They ran soil tests and applied lime and fertilizer. Once the grass was growing, they let the cow herd maintain the pastures through rotational grazing.

"We have 25 to 30 5-acre paddocks, and we can start at one end and graze each one several days, and move on to the next. By the time we finish, the first paddock will be ready to graze again, and we start over. We typically move the cattle when the grass is 3 to 4 inches tall."

Steve says the program also helped them extend their grazing season through the use of cool-season small grains. He rents a Haybuster no-till drill from the local Natural Resources Conservation Service office to drill about 50 pounds per acre of winter wheat in his pastures in late September for late-fall and early-spring grazing. Sometimes, that planting will include a mixture of cereal rye and annual ryegrass.

To feed the pastures, Steve hires the local co-op to supply 200 to 250 pounds of nitrogen per acre based on soil-sample analysis and grass condition. But, he says, his Durana and Patriot perennial clovers help reduce the costs of urea and ammonium nitrate.

"Because of the clover, I have some fields where I graze cows that don't need fertilizer for three to four years. But, where we are going to take hay, I'll generally put down at least 200 pounds," he explains.

Today, the Swensons say they are at equilibrium on cow-herd size and pasture potential, maintaining their 100 cows, 90 calves per year, and holding yearlings from the previous season, plus putting up 600 900-pound round bales per year.

"When Steve retired from contracting, we had to make the cattle enterprise self-sufficient," Shari explains. "We could no longer count on his off-farm income to buy fertilizer."

The Swensons have been selling beef to individuals for some time. To improve their returns, they are now selling to two local restaurants and have just agreed to provide beef to a health food store.

Steve says the new markets put the enterprise on a self-supporting financial footing, but it means keeping calf crops longer and holding yearling steers until they are market weight. That requires the pastures to be very efficient, and at present, they're doing about all they can. The Swensons recently purchased another 240 acres for expansion, and Shari says, "While it has some nice fields, it is a brushy mess."

Matt Flynt, along with the Swensons, was one of the original cooperators in the 300 days program and has found it has benefited his bermudagrass-based operation.

"We calve in the spring, wean in the fall and sell the previous year's calf crop as long yearling feeders in the fall. There are times we have triple our cow numbers in total animals grazing," he explains.

Flynt is now a couple of years into the process of establishing some cool-season perennials to supplement his cool-season annuals.

"I'm working with U of A testing improved fescue varieties that will do well here. That way, farmers in central and south Arkansas will have a cool-season perennial to add to their toolbox," he explains.

Flynt started beef production 20 years ago as a first-generation rancher and began the business with what he calls "fresh eyes."

"Rotational grazing and managed intensive grazing were just starting to get traction then, and I saw the benefits, so I got into it early," he explains. "It's just more efficient than traditional unlimited grazing."

"I don't have a lot of permanent paddocks," he explains. There are some high-tensile subdivisions on most pastures, but the heavier wire is placed to enable maximum flexibility with the Polywire.

"When the 300-day program came along, it helped me refine what I was doing and forced me to look at my weaknesses and concentrate on them to further improve my operation," Flynt explains.

Winter grazing was the biggest weakness he had to tackle.

"Feeding hay to cattle is a lot of work and expense, so the more they can harvest themselves, the better off I am," Flynt says. "Adding cool-season annuals like cereal rye and ryegrass makes a big difference in cutting a major expense."

Flynt no-tills cereal rye into his pastures with a John Deere drill and many times overseeds annual ryegrass by broadcasting it and working it in with a heavy hayer (a shallow-spiked drag).

He says learning to stockpile forage was challenging.

"Stockpiling forage when it's growing vigorously and most productive is a mental game," Flynt explains. "It's tough to take that good grass out of the rotation and make yourself bank it for later."

Many times, he'll graze some pastures short in late July and early August, fertilize them with about 100 units of nitrogen in the form of urea and then stay off them the rest of the summer and into the fall. Then, Flynt will strip-graze the pastures in November and December.

"I probably put up more hay than I should, but I'm very afraid of drought and like to have a big insurance blanket of hay in the barn," he says. Flynt has a lot of covered storage, and that makes a huge difference in his ability to keep hay for several seasons. He usually has two to three years of hay on hand.

Overall, Flynt says there's nothing magical about the 300-days program and likens it to the popular practice of budget billing, averaging one's annual electric bill to avoid the peaks and valleys.

"It encourages you to examine your total annual forage supply to see surpluses and shortages, and work to fill in those gaps," he says. "It's not always fun to analyze your weaknesses -- it's much more satisfying to look at your strengths -- but even pro athletes know they must work diligently to eliminate their weaknesses. Using that same mentality for ranching can provide strong economic benefits."

1. Inventory pasture base to determine what forages are available for grazing during each season.

3. Add complementary forages to fill seasonal gaps in the existing pasture base.

4. Plan forage production and grazing practices ahead for the year, and commit the schedule to a calendar.

5. Monitor and adjust forages and livestock, as needed, by keeping records of each practice.

-- More information on the 300 Days Grazing System can be found at www.uaex.uada.edu/publications/pdf/FSA-3139.pdf 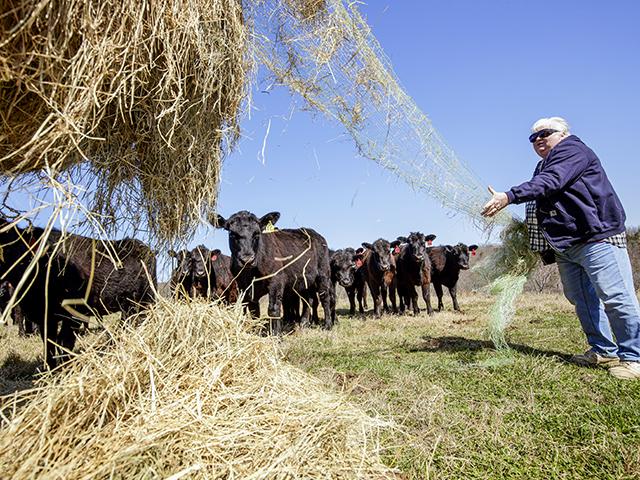