OMAHA (DTN) -- With heightened tensions over a potential Russian invasion of Ukraine, a North Dakota family is pleading with the Biden administration not to leave behind a farmer who has been stuck in a Ukrainian jail cell since November.

"As Americans head for the exits in Ukraine, one citizen is stuck in legal limbo and he needs the Biden administration to ensure he's not left behind," wrote Kristi Magnusson about her brother on Thursday in the Bismarck (North Dakota) Tribune.

The prospect of war in Ukraine remains high after Russian officials declared there was "little cause for optimism," following positions taken by the U.S. and NATO allies. The U.S. embassy in Ukraine has urged U.S. citizens to depart the country.

Kurt Groszhans, 50, of Ashley, North Dakota, continues to be held in detention by Ukrainian courts after he was arrested in mid-November and accused of plotting to assassinate Ukraine's minister for Agrarian Policy and Food, Roman Leshchenko, who was briefly a business partner of Groszhans. After a Ukrainian court ordered 60 days of detention following Groszhans' arrest, a three-judge panel earlier this month ruled he should remain in detention until his trial begins. Groszhans' next court hearing is set for Feb. 13.

Ukrainian prosecutors have charged Groszhans with attempted murder, attempted extortion and attempted kidnapping. The Ukrainian National Police allege to have recordings of Groszhans' former assistant, Olena Bogach, meeting with people who turned out to be police informants. These recordings claim to be discussing how to get money from Leshchenko and how to potentially kidnap him, according to Groszhans' attorney, who spoke to CBS News.

Groszhans' attorney, Pavel Ustimenko, told CBS Groszhans was rarely present during conversations involving Bogach and Groszhans also could barely speak Russian or Ukrainian. Ustimenko told CBS, "Groszhans was drawn into these conversations with Bogach and other Ukrainians by promises of help 'to find decent land for farming' in the country. Ustimenko also alleged to CBS that Groszhans "was poisoned with psychotropic substances" at a restaurant the night before his arrest and didn't even remember leaving the restaurant. Both Groszhans and Bogach were then accused of attempting to hire a hitman to kill Leshchenko.

"I believe this is all a set-up," Ustimenko told CBS. "Not only does Kurt deny the charges, but there is no proof of any crime in the material that police gave us."

Magnusson, her sister and other North Dakota family members have been working since Groszhans' arrest to raise funds for his legal defense and sway the U.S. State Department to help get him out of the country. Magnusson pointed out in her column Thursday that, "Ukraine desperately needs U.S. political and military support." Still, Groszhans is being held in the country though he has not been convicted of a crime.

"As millions of dollars of U.S. military aid flow into Ukraine, the fate of an innocent American hangs in the balance. Now is the time for Congress, the State Department and the Biden administration to use their leverage to get my brother out of harm's way before it is too late," Magnusson wrote. (https://bismarcktribune.com/…)

The Groszhans family had emigrated to the U.S. from Ukraine more than a century ago, but Kurt Groszhans had gotten interested in investing in Ukrainian agriculture in 2017 after touring the country.

Groszhans had posted on LinkedIn last September that he had hired Leshchenko as director of his farm operations in Ukraine. Groszhans accused Leshchenko of taking his money to help provide political funds to Ukrainian President Volodymyr Zelensky in 2019. Groszhans characterized himself as a "deceived American investor."

Groszhans wrote on LinkedIn that he had provided details to Ukrainian courts and national police about his allegations but also accused Leshchenko of sabotaging any investigation.

"I (was) forced to attract attention of media to my case," Groszhans posted. "I am ready to answer any questions and provide any documents you might require."

Groszhans had accused Leshchenko of fraud in four years of legal battles and a public campaign over $250,000 in missing funds after Groszhans had invested in a Ukrainian farm. Groszhans sued Leshchenko in Ukraine and made public his allegations more than a year ago, shortly before Leshchenko was appointed as the country's agricultural minister. He maintained Ukrainian courts did not want to hear his case because of political pressure.

Magnusson, in her column, noted Leshchenko had returned some money to Groszhans "as Leshchenko's political star began to rise," but also had threatened to have the North Dakota farmer arrested if he kept accusing Leshchenko of fraud.

In an article a year ago in the now-defunct Kyiv Post, Leshchenko had claimed that Groszhans was a dishonest businessperson and had attempted to smuggle genetically modified crops into Ukraine. Leshchenko also had threatened in that article to have Groszhans jailed.

Leshchenko told BBC News of Groszhans' charges, "What happened is a shocking situation for me. But I want to say this: If someone thinks that the threats, assassination, blackmail or physical removal of the Minister of Agrarian Policy will allow him to avoid legal responsibility, then I can assure you that it is not the case."

Sen. Kevin Cramer, R-N.D., told media in his home state he visited Groszhans during a recent meeting in Ukraine. Cramer said he spoke with Groszhans for about 45 minutes and said he was doing well physically, emotionally and mentally.

"I think there was optimism," Cramer said to Fargo, North Dakota, TV station KVRR. "I do have information. I do have lots of conversations. It's a moving target, but I really think it's best that his legal team and the diplomats and his family and those of us working on it sort of keep that to ourselves while we play it out." 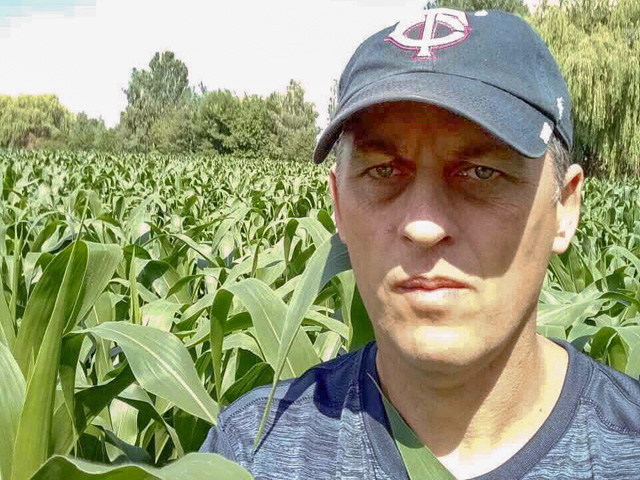