OMAHA (DTN) -- President Joe Biden will start 2022 highlighting what the White House sees as unfair market practices by the largest meatpackers and detailing plans to diversify the meatpacking industry while increasing enforcement over anti-trust practices.

Plans detailed by the White House likely will not sit well with the country's largest beef and pork packers -- Tyson, JBS, Smithfield, National Beef, Cargill -- as the packing industry has claimed that "black swan" events such as the pandemic, labor problems and supply-chain challenges drove up prices for consumers and higher retail prices were not caused by a concentrated industry. In December, the North American Meat Institute criticized the White House Economic Council for a report looking to "shift blame for record food inflation to the meat and poultry industry."

The plan rolls out a variety of meatpacking initiatives at USDA, plans to tighten up enforcement of the Packers and Stockyards Act (P&SA), and a strategy by USDA and the Department of Justice to "better coordinate" antitrust efforts.

The White House will use $1 billion from the American Rescue Plan to expand packing capacity for independent meat processors. Vilsack had announced as far back as July that USDA would be providing up to $500 million in loans and grants to independent packers, but those funds have not been released.

Along with that, the Biden-Harris administration will also highlight plans to tighten the P&SA, revisiting rules USDA has been trying to finalize since the late days of the Obama administration. There are three proposed rules to tighten enforcement of the P&SA, meant to provide producers with more leverage and the ability to sue for unfair competitive practices by packers.

USDA and the Department of Justice (DOJ) also will create a portal to report concerns about violations of antitrust laws that will allow them to better understand farmers' and ranchers' concerns, the White House stated. Along with that, the White House will work with Congress to create more transparency in cattle markets.

The White House endorsed legislation by Sens. Chuck Grassley, R-Iowa, Deb Fischer, R-Neb., Jon Tester, D-Mont., and Ron Wyden, D-Ore., that would require a set level of negotiated cash trade in cattle markets based on regions in the country. That legislation has been divisive in the Senate and in the cattle industry despite multiple hearings last summer over the state of cattle markets.

USDA will also issue new "Product of USA" labeling rules to help consumers better understand where their meat comes from. Under current rules, meat can be labeled "Product of USA" if it was processed here -- meaning livestock raised outside the U.S. can be labeled "Product of USA" if the animal or meat is further processed in the U.S. The White House stated, "We believe this could make it hard for American consumers to know what they are getting. USDA has already begun its top-to-bottom review of the current labeling rules and consumers' understanding of the labels, with the goal of new rulemaking to clarify 'Product of USA' standards."

Regarding processing funds, the White House detailed that USDA will release plans for at least $375 million of those funds Monday, Jan. 3. USDA will request proposals for approximately $150 million to "jump-start" at least 15 processing projects and release those funds this spring. Another $225 million will be rolled out in phase II this coming summer, the White House stated.

Also, to help independent packers, USDA will release another $275 million in loan guarantees with lenders to provide "long-term affordable capital" with those funds expected to be released by the summer as well.

USDA will also dedicate another $100 million to support the expansion of the work force for packers "to support development of a well-trained workforce, safe workplaces, and good-paying, quality jobs by working closely with partner organizations, including labor unions, with expertise in workforce development and worker health and safety."

Another $100 million will go to reduce overtime inspection costs for small and very small processing plants to keep up with demand. Those funds had also been provided by Congress to help small processors ship meat across state lines with federal inspection approval. USDA had already issued $32 million in grants to 167 meat and poultry processing facilities for them to become certified for federal inspections.

"The meatpackers buy from farmers and sell to retailers like grocery stores, making them a key bottleneck in the food supply chain," the White House stated. "Most farmers now have little or no choice of buyer for their product and little leverage to negotiate, causing their share of every dollar spent on food to decline. Fifty years ago, ranchers got over 60 cents of every dollar a consumer spent on beef, compared to about 39 cents today. Similarly, hog farmers got 40 to 60 cents on each dollar spent 50 years ago, down to about 19 cents today."

In meeting with farmers and ranchers, the White House stated the "producers will talk about the challenges they have faced as large conglomerates have absorbed more and more smaller processors."

The White House pointed out the strategy in all of this is to reduce inflationary concerns.

"The president continues his aggressive work to tackle the causes of the higher prices American families have been facing," the White House stated.

Inflation was among the reasons that were cited by critics of Biden's "Build Back Better Act" that was at least temporarily derailed last month when Sen. Joe Manchin, D-W.Va., stated he could not support the bill because of the impact on inflation and the national debt. 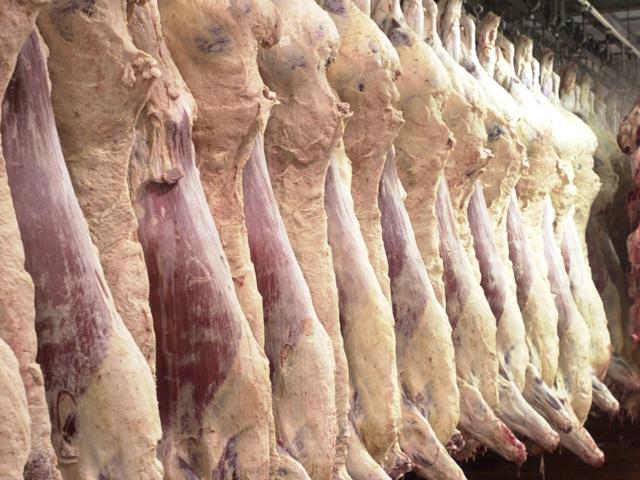