DYESS, Ark. (DTN) -- Through a thick cloud of dust, Mark Fincher could see the faint outline of a small, but significant white farmhouse as he harvested soybeans in mid-October near Dyess, Arkansas. It's a home that Fincher has seen a thousand times in his 56 years, but it still stirs up thoughts about its significance to country music, agriculture and the local community.

Johnny Cash grew up in the modest five-room house with no running water. He and his family spent countless hours working in surrounding fields. Cotton was the primary "cash crop," which was picked by hand.

If Johnny was alive, Fincher believes the Man in Black would be green with envy of his John Deere combine and other modern implements compared to mule-drawn equipment his family used. A cotton picker today can harvest more than 40 acres -- the size of the Cash farm when it was sold -- in four hours. It would take the Cashes a couple of months to harvest their cotton.

"When I'm out cutting soybeans or rice, I think if Johnny could just see this now, he would be astounded," said Fincher, whose family was friends with the Cashes. "When I started cutting beans, I didn't have air conditioning in the combine.

"What the farmers in the 1940s did in the mule days, it was unreal," he added, referring to the working conditions and labor involved with farming. "Agriculture has come a long way."

About 40,000 Cash fans make the pilgrimage annually to his boyhood home, part of the Historic Dyess Colony heritage site maintained by ASU. The university acquired the home in 2011 and restored it through proceeds from an annual Johnny Cash Music Festival.

The home, about two miles from Dyess, is open for tours. People can see the upright piano that Johnny's mother played, which the family gathered around for sing-a-longs. The community's former theater, where Cash watched Tex Ritter movies, is now a visitors center. The town's administration building serves as a museum filled with Cash memorabilia and history about the colony.

"People from all around the world and all walks of life come here," said Larry Sims, who recently retired as the historic site's facilities manager and tour guide. "Most visitors arrive having never heard of the agricultural colony or the concept behind it. Many people end up to be as interested in it than Johnny and the Cash family. People also learn how Johnny grew up like any other kid without a silver spoon in his mouth."

Sims often explains to tourists how production agriculture has evolved since the mid-1930s, when the Cash family started their nearly 20-year farming run in the area.

Arkansas' first WPA Administrator, William Reynolds Dyess, convinced government leaders to buy 16,000 acres of mostly swampland in northeast Arkansas, which would be turned into subsistence farms. The colony was laid out with a town center, with a hospital, school, businesses and homes. It was surrounded by mostly 20-acre farms. The colony was named after Dyess following his death in 1936.

The government provided a new three-, four- or five-room house, barn, chicken coop and 75 chickens, smokehouse, outhouse, a cow and a mule. Enough land was cleared for the farmstead. Arkansas residents had to apply for the opportunity, which included Ray and Carrie Cash. After acceptance, the couple moved with their children: Roy, 13; Louise, 11; Jack, 5, J.R. (later known as Johnny), 3 and Reba, 1, from Kingsland to Dyess in March 1935. Joanne and Tommy were born in Dyess.

"Just like the other 500 families, the Cashes wanted a better life," Sims said.

"Agriculture was everything back then," said Billy Suthern, a Dyess resident since birth in 1942 and heritage site employee. He remembers seeing Johnny in school and talking with him as an adult. "He (Johnny) was just like us; worked all the time. When he would visit, he was nice to talk to."

Johnny Cash lived in Dyess until he joined the U.S. Air Force in 1950 after graduating high school. To many locals, despite Cash's fame, he's still the boy and teenager who worked and played hard and liked to hang out with friends at their houses and the Pop Shop in town.

"It was a tight-knight community," Fincher said. "Johnny stayed at my grandparent's house with Uncle Dorsey possibly more than his own, probably because there was some good eating. They had a lot of fun and probably got into a little trouble together." Dorsey and Johnny went on their senior trip with other classmates to the Grand Ole Opry in Nashville in 1950.

In a video posted on the Academy of Achievement website, Johnny said he knew at age 4 that he wanted to be a singer after listening to songs played on the family's Victrola. His experiences on the farm and growing up in Dyess influenced his music.

The long hours and financial struggles on the farm came through in Cash's song "Pickin' Time." A devasting flood in 1937 that forced an evacuation of Dyess is chronicled in the hit song "Five Feet High and Rising." Cash visited Dyess periodically until his death in 2003.

"A lot of the stuff Johnny grew up with he sang about," Sims said. "He started in the fields and ended up singing for presidents and kings. It's amazing how anyone can do that."

Learn more about the Dyess Colony and the Cash home at: 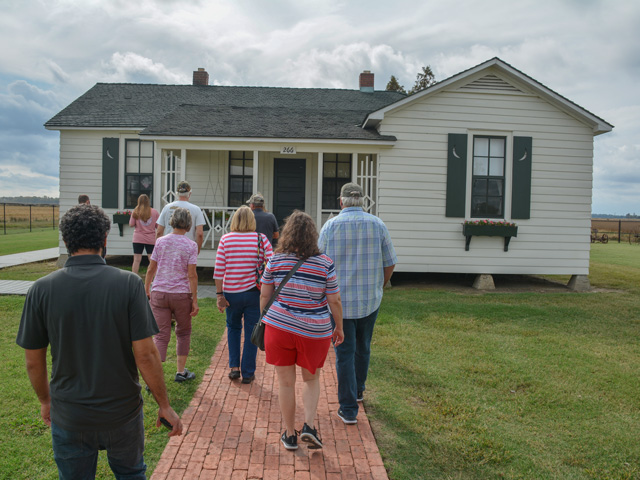