"Each of you needs to walk out of here and find five to 10 beginning farmers and ranchers and shepherd them to solidness. This will pay you back," Hipp told the American Agricultural Lawyers Association annual meeting late last week.

"Write their will for free, help them transition their land without paying a fortune to do it, make sure the land stays in farming," she said.

Hipp also told the largely white, male crowd, "Each one of you should reach out to a farmer or rancher who doesn't look like you," a reference to Black, Native American, Asian, Hispanic and female producers.

Farmers and ranchers "need a solid agricultural law reality," Hipp said. "They are not going to survive and thrive without the people in this room."

Hipp noted there were 5 million farmers before the farm crisis of the 1980s, but that the number has gone down to 2 million, and she fears the number will drop further.

If the number of farmers continues to decline it will mean fewer ag clients as well as fewer people showing up at farm meetings, fewer veterinarians and fewer Mom and Pop grocery stores, she said.

The outreach should move beyond farmers and ranchers to helping young people become the leaders of the Rotary and the FFA (Future Farmers of America), she added.

"Reach out to community organizations in your region and ask, 'Do you need a lawyer?'," she said.

Hipp, who grew up in Oklahoma and as a member of the Chickasaw tribe is the first Native American to become USDA general counsel, explained she is a "daughter of the '80s farm crisis," when her grandfather lost his small tractor dealership and she worked on helping farmers try to survive.

"He hung with the farmers and when they went down, he went down," Hipp said.

Hipp, whose undergraduate degree is in social work, noted that she worked her way through night school at Oklahoma City University School of Law and didn't join the law review when she was invited because she did not have the time. She told the lawyers not to listen to people who tell them they have to do law review to be USDA general counsel.

She said when she got out of law school, everything in Oklahoma was going down, both agriculture and oil and gas. Hipp joined a firm where the securities lawyers had become bankruptcy lawyers, and she spent a year and a half working on repossession cases.

As a Methodist, Hipp said, she couldn't take that kind of work any longer and left without a job. But she soon joined the Oklahoma attorney general's office where she had to handle "grain warehouses going down."

When her boss, Attorney General Robert Henry, asked his staff who was from rural Oklahoma, only Hipp and another woman, who was also Native American, answered.

Hipp said Henry put her on a plane to meet with other lawyers who were working on farmers losing their land, including Sarah Vogel, who was practicing in North Dakota and later was elected North Dakota agriculture commissioner; Susan Schneider, who was practicing in Minnesota and is now director of the University of Arkansas Program in Agricultural & Food Law; and Stephen Carpenter, who later served as senior counsel in the Office of the Monitor in the Pigford discrimination case on behalf of Black farmers against USDA, and is deputy director and senior staff attorney at the Farmers Legal Action Group.

There wasn't even an agricultural bankruptcy code or mediation or stress services, she said.

"Don't ever tell me lawyers can't change the world, because they did," Hipp said.

Hipp said she spent several years talking with USDA officials trying to figure out how to save family farms before pursuing a master's degree in agricultural law at the University of Arkansas.

She stayed at the University of Arkansas to teach and became more involved in American Indian law. She served at the Agriculture Department in the Obama administration as Agriculture Secretary Tom Vilsack's tribal relations adviser and as national program leader for the National Institute for Food and Agriculture's Farm Financial Management, Trade Adjustment Assistance, Risk Management Education and the Beginning Farmer and Rancher Development programs.

Hipp returned to the University of Arkansas to found the Indigenous Food and Agriculture Initiative. After the Keepseagle case charging USDA with discrimination against Native American farmers was settled and the Native American Agriculture Fund was started with funds from that case that were not distributed to the plaintiffs, she served as CEO of NAAF.

Hipp, who was confirmed by the Senate in July, generally avoided getting into the details of current USDA policy in her speech, but said she was thrilled to be working in the Biden administration and again with Vilsack and with David Grahn, the deputy general counsel, who had previously worked at USDA before joining the Farm Credit Administration.

Hipp did say she saw the Infrastructure Investment and Jobs Act, which was moving through the House the day she spoke, as "a lifeline for rural America." She particularly highlighted the funding for increasing broadband internet, which she said is vital to convincing young rural Americans to return home after college, noting they want to spend their working lives in rural America, not just come home after they retire.

But she added that they don't want to live in a "wasteland" without broadband or hospitals.

Hipp urged the lawyers to train a new generation, especially tax specialists, and said they are needed at USDA and in the Extension service.

Younger workers are particularly needed because they know how to use the internet, which can solve a lot of problems such as farm record keeping.

Noting that she considered herself to be with family at AALA, Hipp urged the lawyers to use their influence with rural Americans to convince them to get vaccinated.

Hipp said she didn't need to preach about COVID-19 vaccine mandates because she lives near Tyson's, which has imposed the mandate on its employees.

But she added, "It is the right thing to do to protect each other. I have a husband at home. If I bring it home, he will die."

"I encourage you to help people understand the vaccine. I am confused -- we don't love each other enough to take this seriously?" she asked. 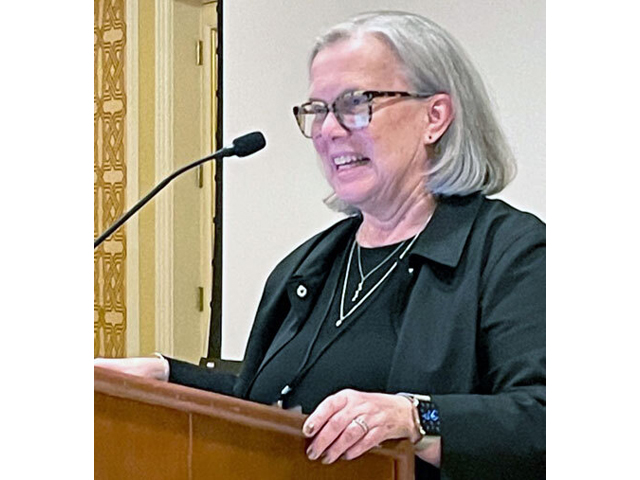