A compact system is going to be moving through the Corn Belt through Oct. 21 and will produce scattered showers from South Dakota through Michigan which could be moderate in some cases, especially in South Dakota and Minnesota. Snow is also forecast from eastern Wyoming and into western South Dakota yet again this week.

Last week, 1 to 2 feet of snow fell in some of these areas. This week, amounts are likely to be only a couple of inches. But the impact to harvest does not look to be very wide-reaching.

Part of that is because harvest progress is so far ahead already in these areas. In the USDA's latest report, corn harvest has reached 51% in South Dakota, 53% in Minnesota, 32% in Wisconsin, and 32% in Michigan. All four states are well ahead of the average pace. And in soybeans, progress is even more substantial. Harvest progress has reached 86% complete in South Dakota, 91% complete in Minnesota, 59% in Wisconsin, and 39% in Michigan. Only Michigan is behind the average pace, the rest are all well ahead of it.

With most of that moderate rain coming in South Dakota and Minnesota, where both states are substantially ahead of schedule, the impact should not be as significant as you might think for mid-October.

There is the potential for moderate rains to impact the southern end of the Corn Belt this weekend into early next week, from southern Missouri to southern Indiana and Kentucky. These are states that have shown more normal harvest progress on corn, and slower-than-normal progress on soybeans. Though they look heavy and should not be moving very fast as currently forecast, those showers look spotty and will not affect a huge portion of these states. The effect is likely to be small as well.

So, a week's worth of good harvest progress is likely as we turn to the back half of the harvest season. But that could be it.

A more active pattern is being indicated on the models east of the Rockies starting next week. There is a large trough of low pressure in the North Pacific Ocean. That system will continually be reinforced by more troughs through the end of October and likely into early November as well. These troughs will move through the Pacific Northwest, ushering in a period of better showers for this drought-stricken area. But every so often, we'll see one of these systems escape eastward through the Plains and Midwest, bringing about potentially strong storm systems.

One of these looks to happen in the middle of next week. Models are very inconsistent with the development of this system, the impact to the remaining harvest, and shower chances for Southern Plains winter wheat areas. But there is potential for widespread impacts from another storm system. And that likely will not be the last either. Fall is a time of change, and these large systems should be expected. We had gone through the first half of the fall season with very little of these widespread storm systems until we had a large one last week. It would be hard to go through the back half of the season without some really good storms as well. Large swings downward in temperature help us to step down to our eventual bottom during winter. It is only a sign of what is to come. 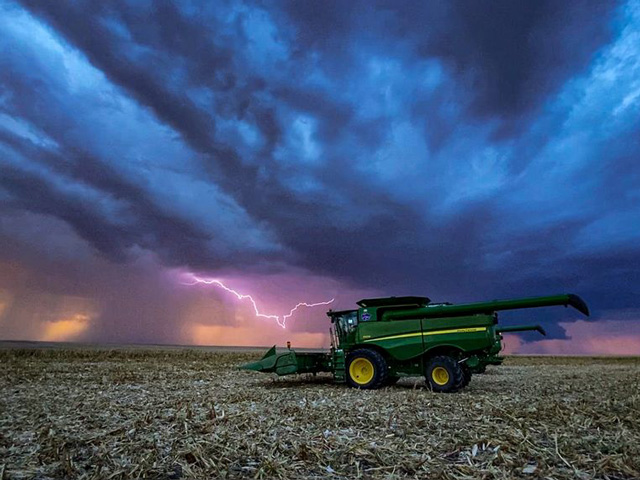