MINNEAPOLIS (DTN) -- Fall is a season to expect big changes. We have not really seen that so far this season. Well-above-normal temperatures have made the beginning of the fall more like an extension of the summer. However, there's a change next week.

There's a storm system coming up that looks to be large, dynamic and full of impacts to agriculture. It would be best to keep eyes on the weather forecast and hasten fieldwork because, in some areas, if you do not get out soon, you may have to wait awhile.

First, a trough currently in the Western states on Oct. 8 will produce two storm systems as it leaves the Rockies for Oct. 9-12. Scattered showers will move through the Plains and western Midwest and could have some pockets of moderate rainfall. The second of those systems could produce some severe weather across the Southern Plains Oct. 10-11.

But the big storm, the strongest of the three, will develop as a large trough of low pressure digs into the Intermountain West Oct. 11-12. The pool of cold air in the West will clash with the warm air in the East to produce a strong and dynamic system that is forecast to emerge into Colorado Oct. 12-13 with the low-pressure center moving northeast through the Dakotas and Minnesota Oct. 13-14.

I talked about this system a little bit in my weekly blog here: https://www.dtnpf.com/….

And surprisingly, not much has changed. During the last three days, models have stayed eerily consistent on the system, though there are some slight differences with timing and track.

The system is expected to produce widespread moderate to heavy steady rain through the Northern Plains and Minnesota, a welcome fall system to put a dent in the drought.

Across Nebraska and Iowa, we are expecting to see a mix of steady rain and scattered thunderstorms that could bring locally heavy precipitation to some areas and completely miss others. (See a video of what farmer April Hemmes, of Hampton, Iowa, told Progressive Farmer Crops Editor Matthew Wilde Oct. 7 about how the upcoming weather next week might affect her crop she's currently harvesting here: https://www.dtnpf.com/…).

To the south, from Kansas and Missouri down to the Gulf Coast, a line of scattered thunderstorms along a cold front is expected to push quickly east. Thunderstorms could be strong to severe and have heavy precipitation rates, though their quick movement through much of the area will limit the overall rainfall potential.

Rainfall is not the only hazard with the system. In addition to the severe threat, strong winds are likely to wrap around the low center. It is hard to put a number or range on potential wind speeds with any confidence this far out, but it would not be out of the question to see a large swath around the Dakotas and Nebraska, and possibly the surrounding areas, see wind gusts exceeding 50 mph after the low-pressure center and cold front move through the area.

To producers in these areas, the rainfall is likely to produce widespread delays in harvest, especially when you factor in all three storms combined. Rainfall amounts are forecast to be roughly 1 to 3 inches across a wide area of the Plains and western Midwest, with locally heavier amounts, especially in the Northern Plains.

The forecast image through Oct. 15 accompanying this article does a good job of highlighting the potential rainfall threat, even if it may be too widespread across the Southern Plains. Producers that have yet to harvest may find it a good idea to get out while they can, or they could be waiting a while longer. And the heavy rains could cause flooding, which would have issues for grain quality as well.

The rainfall would be good for reducing drought across these areas, however. The major drought that has been consistent over the Northern Plains all year long had some punctures in it from good rains from mid-August through mid-September. This system is likely to reduce drought, but it might not eliminate it, as much of the region is still well behind in rainfall for the year.

Winds can cause a host of issues for mature crops as well, causing pod loss in soybeans, or lodging brittle corn stalks. It can also have an adverse effect for winter wheat, sandblasting it and causing damage to leaves, or drying out soils where rain was not as extensive. The Southern Plains may have more issues with this, as rainfall will not precede the severe storms. But the main threats are to harvest with delays, damage and quality issues.

One item I described in my earlier blog was that dreaded "snow" word. While cold air will be extensive across the West, it will be hard for it to leak into the Plains enough to produce snow on any wide scale. However, there are areas in the front range of the Rockies that will see snow accumulating.

That looks most likely to occur in Wyoming and portions of Montana, possibly in northern Colorado as well if models are correct. This could have a huge impact for livestock producers as well out in these areas. But any extension of the snow to other areas is unlikely to occur. 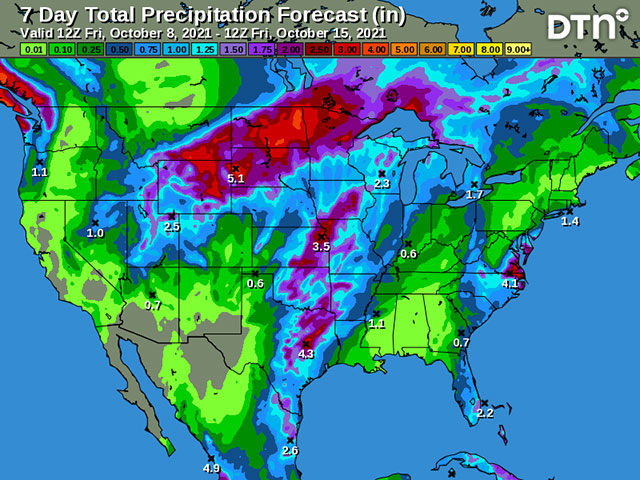