For 45 years, Jerry Bird has been managing a 75-plus-acre stand of loblolly pines on the rolling hills of Oglethorpe County, in northeastern Georgia. During much of that time, he says his work didn't return a great deal for his efforts.

"This part of Georgia sits on a massive formation of granite not far beneath the soil surface," he explains. "It takes a lot of work to grow crops here, but pine trees thrive."

Land in the Broad River basin near the confluence of the Broad and its South Fork will produce marketable timber with proper management in about 40 years, so Bird's due for a payday soon. Yet, for a variety of reasons, Bird is reluctant to hear the chain saws.

"Over the past 10 years, I've been able to cut my workload on the trees, and the place looks like a park," he says. "My grandkids live next door, and we enjoy being in the woods and watching the game that has returned. We have lots of wild turkeys and white-tail deer, and it's just a pleasure to experience."

BRING ON THE GOATS

Bird, a retired rural mail carrier with a distant background in logging, says the timber enterprise took a big turn in 2013, when he gave up the usual brush management method of controlled burns beneath the trees.

"Like many pine producers, we were having to burn the understory beneath the trees about every two or three years. Otherwise, it would become a jungle in there," he recalls. "When you burn, the smoke bothers the neighbors, and you leave yourself open to liability if the fire gets out of control; so I was looking for a better way to manage brush."

Bird had some experience with Boer goats on his son's place and had seen what they could do. He fenced a 30-acre plot and introduced 20 goats that first summer. They did so well, he left them in through the winter.

In addition to clearing much of the viny brush that thrives on the forest floor, the goats ate the bark and girdled the sweet gum trees that spring up beneath the pines.

"The sweet gum is a plague to a pine timber producer because it is such a competitor for soil nutrients," Bird explains. "But, the goats killed many of them that first winter then went on to munch on the suckers the sweet gum roots put out in the spring. Ultimately, goats will eradicate the sweet gum by starving it to death."

The goats were showing a lot of promise, but Bird was tiring of hauling water to them.

"Working with the local NRCS [Natural Resources Conservation Service] office, I found if I'd keep the goats from watering in the creek (to prevent turbidity and stream bank erosion), they would cost-share a well, waterers and cross-fencing," Bird explains. "That's when this operation really took off. The goats and the trees complement one another, and are an excellent combination in this part of Georgia.

"NRCS also helped me with advice on improving my forages beneath the trees," he continues, "now that the goats had opened up the middles and provided assistance at setting up four paddocks for a rotation-grazing plan."

Bird began overseeding his beleaguered mix of native eastern gamagrass and big and little bluestem with annual ryegrass and orchardgrass, along with red clover for summer growth and nitrogen fixation, and white clover for cool-season benefits. He also makes use of sericea lespedeza, a palatable legume, in nearly all of his paddocks.

"The goats were thriving, and they seemed to be helping the trees, because everything they eat was going right back on the ground as manure," he explains. "Since then, I've cross-fenced the rest of the place and now have nine paddocks total."

Bird's tree farm is encircled with a six-wire electric fence supported by steel T-posts and plastic standoff insulators. The interior paddocks are built the same way. An electric wire is 6 inches off the ground between posts and another 6 inches above that.

"Because the soil is so shallow and dry here at times, we run a ground wire 6 inches over the electrified pair and then repeat that again above to provide good protection," Bird explains.

He uses 8-foot wooden poles for gate posts and corner posts in the paddocks, and powers the system with a household current 13-joule charger.

"That's enough power to fire through vegetation, particularly since I only charge the paddock the goats are grazing and the perimeter," he says.

During the summer, the goats usually spend about three days in a paddock before Bird moves them. In the winter, he usually extends their stay in each paddock to match available forage.

About the same time as he improved the grazing infrastructure of his silvopasture operation, he made the switch from Boer-based goats to Kiko goats. They are a hardy, parasite-resistant, fast-growing breed developed in New Zealand in the 1980s to cope with hot, humid conditions.

"We get a lot of rain here, and it can be pretty steamy in the summertime," Bird explains. "The Kikos seem to do really well on their own and don't require a great deal of attention to thrive."

The goats produce small offspring with very few birthing problems, and the kids grow quickly to market weight of 65 to 70 pounds in four to five months, he says. "A herd of Kikos will produce about three kid crops every two years with a 150-day gestation period. In addition to controlling my brush, they have also provided a revenue stream I'd never had from the trees."

Bird runs 50 to 55 nannies and a pair of billies, and in the spring of 2021, the herd also included 35 young goats destined for farm-gate sale to the area's ethnic market. Kiko nannies usually have a pair of kids per pregnancy but can produce up to four babies at a time.

"There are many Hispanics in our area, and through word-of-mouth, I can sell nearly all of the market goats I can produce," Bird explains. "When I have more than I can sell locally, I sell the others through a goat auction in nearby Toccoa. All that brush I used to burn I'm now selling for about $2 a pound," he smiles.

Pest control -- for visitors, not goats -- is another benefit of Bird's silvopasture management.

"Before the goats, we couldn't enjoy the place because of all the brush, which was home to a bumper crop of ticks and copperheads," Bird says. "Now that the goats have cleaned up the understory, the tick population has been significantly reduced, and you can see where you're stepping.

"I used to kill three to four copperheads every summer, but since the goats came, I've only seen one," he says.

While growing trees is a slow process and one that doesn't seem to take a lot of day-to-day hands-on management, the goats and the trees together require an enhanced skill set.

"Rotation grazing is very important to success with the goats," Bird explains. "It's a key to reducing parasite problems even in my herd that spends most of its time spread out in the woods."

Bird checks the goats every day and addresses any problems, but for the most part, the Kikos take care of themselves. They live in the paddocks in the woods with no other shelter.

"I feed them only enough to get them to come to me when it's time to move from paddock to paddock, and I supplement minerals on a trailer I can move with the goats," he says. "The rest of the time, they forage for themselves, and they have their babies by themselves."

Bird gathers the goats about every two months for a FAMACHA inspection and test for anemia caused by the parasite, Barber's pole worm (twisted wireworm). FAMACHA is a diagnostic test to help small ruminant producers identify animals that require anthelmintic treatment and those that do not require deworming.

By inspecting sheep and goat eyelids, and comparing the color found to samples in the FAMACHA chart, one can recognize anemic conditions.

"The Kikos are naturally resistant to parasites, and they are particularly protected where they are scattered out in the woods," Bird explains. "When I check them in hot weather, I may have 15 out of 90 that need to be wormed. In cooler conditions, that number will fall to a range of eight to 10."

Bird uses a pair of young Anatolian shepherds to oversee the herd 24/7. He says unlike Great Pyrenees guard dogs, the Anatolians will stay in the paddock with the goats and not roam.

"We used to have a lot of coyotes around here, but now, every evening just before sundown, the dogs start barking at every sound; and now we rarely hear a coyote."

"After we introduced the grasses, I began fertilizing and watching the soil pH very closely," he explains. "I have to stay on top of lime needs, because clover wants to grow in a pH range of 6 to 6.5, while the pines want an acidic soil of about pH 4. We fertilize on that razor edge every time."

Bird says his stand of pines has been thinned twice in the past, once for initial thinning at about 12 years and again as the trees began to mature and the grass-growing area beneath them was being shaded. Neither harvest was a real moneymaker unlike the promise of the final clearing for pole and plywood timber -- the stage his pines are rapidly approaching.

"I could harvest right now," he says, "But, I enjoy the place with my grandkids so much, I don't want to clear it. Managing it with goats has made it like a city park."

Regardless of Bird's timing of the final harvest, he says the goats will have added significantly to his returns. 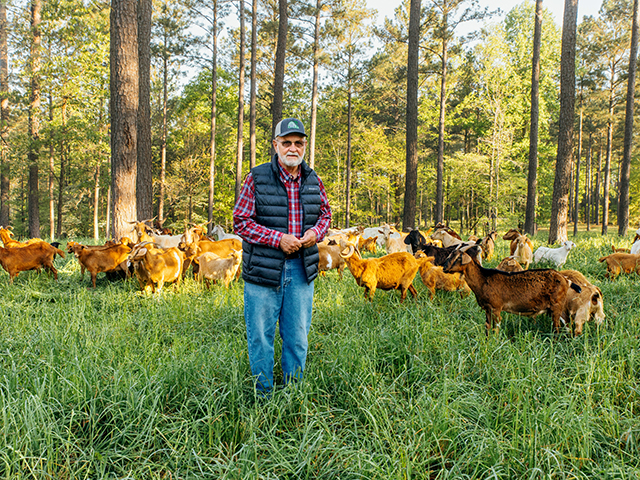