ROCKVILLE, Md. (DTN) -- If fungal infections had a summer 2021 tournament, Southern corn rust would be poised to be a breakout star.

The fast-moving tropical corn disease got an early start in the Midwest this month and is now poised to get an assist from Mother Nature in the weeks ahead.

Farmers in the mid-South, Midwest and Southern Plains should be alert and scouting, plant pathologists said. The Delta region is producing a decent crop of rust spores, and they have been detected sneaking into southern and eastern Kansas, western Missouri, southern Indiana and southern Illinois in the past week.

"With a high-pressure system moving into the Midwest this weekend and remaining there for much of next week, the flow will be out of the south from the Delta region, where the disease is already prevalent, through the Plains and eventually the western Midwest by midweek," explained DTN Ag Meteorologist John Baranick. "This is a good setup to transport moisture and rust spores northward through these states."

The presence of the disease in Midwest states such as Illinois and Missouri as early as mid-July means it will have plenty of time to reach economically damaging levels in susceptible cornfields in those states and their northern neighbors.

"Now that southern rust has been reported in southeast Kansas, it is time to be actively scouting," as Kansas State University plant pathology Extension fellow Rodrigo Borba Onofre told growers in a university alert this week. "Once pustules are observed, the pathogen can reproduce rapidly if temperatures and humidity are high."

"When deciding to spray for southern rust, it is important to consider hybrid susceptibility, disease incidence (how many plants are affected), and the growth stage of the crop," he added. "Infection early in the season on a susceptible hybrid, coupled with conducive weather conditions, pose the highest risk for yield loss."

Cooler daytime conditions forecast next week in the Midwest and Southern Plains could help slow the disease's development, but Baranick suspects this will be a temporary reprieve.

"Daytime highs will be roughly in the 80s for most locations until you get into the Northern Plains," he explained. But heat may return next weekend, and at least one weather model suggests it will stay put in the Southern Plains through July, giving it plenty of time to coincide with the humid, wet conditions that southern corn rust spores need to develop.

The disease needs moisture in the form of either light rain or plentiful dew for spores to germinate and infect. It develops best when nights don't dip much below 75 Fahrenheit and daytime temperatures reach into the 90s, explained University of Arkansas Extension Plant Pathologist Travis Faske, in an Arkansas Row Crops Blog. "When conditions favor disease, symptoms appear about three to six days after infection and by seven to 10 days, the pustules rupture to release rust spores," he wrote. See more here: https://arkansascrops.uada.edu/….

Under these ideal conditions, the disease is capable of spreading through fields quite quickly, so frequent scouting is important. Southern corn rust pustules will be smaller than common rust and appear almost exclusively on the upper leaf surface, according to the Crop Protection Network. When they first erupt, the spores are bright orange. A crop scout in a white shirt will notice their presence, as the spores rub off the leaves easily. See more here: https://cropprotectionnetwork.org/….

"Research has suggested that applications between VT to R3 have great potential for protecting corn yield, however if fungicide is applied between VT and R1 a second spray may be required to protect end of season yields," he said. By dent (R5), applicators will run into pre-harvest intervals on most fungicides and applications are unlikely to pay off, he added.

"Most fungicides that are labeled for southern rust are also effective for gray leaf spot and will have residual activity for approximately three weeks after application, depending on the product," Borba Onofre noted. 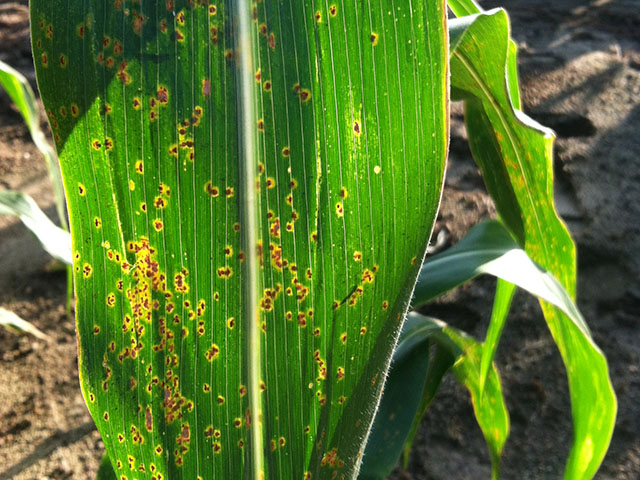