Strong storms blew through a wide swath of the Midwest in the early hours of June 19. While the system brought much needed moisture, it was also accompanied by winds that "steamrolled" or flattened corn in areas of Iowa, Illinois, Indiana, Kentucky and Ohio.

Wind gusts of up to 90 miles per hour (mph) and a tornado report were reported in Knox County, Illinois. Winds in Tazewell County near Tremont were also recorded at 77 mph. Farmers in Vermilion County, Illinois, have reported 4 to 5 inches of rain and corn flattened.

DTN weather analysts Darren Miller and John Baranick said the radar indicated a supercell grew into a mini-bowing segment, an arched or bowed out line of thunderstorms that stretched across a fairly wide section of the Midwest between 11 p.m. and 1 a.m. The corridor of damage included wind, rain and some sporadic hail events.

On Saturday, I drove the back roads of Moultrie and Macon County, Illinois, and found most of the damage there to be leaning or bending of plants. In this area, I didn't find uprooting (root lodging) or "green snap" where stalks break off or snap above a stalk node. While hard to look at, bent over offers hope that there will be recovery.

A survey of the literature provides some ideas to lean on in these corn leaning situations. Dan Quinn, Purdue University corn specialist, filed a comprehensive look at the recent storm damage in Indiana and what it means https://thekernel.info/….

"Symptoms of recovery can be shown by plants beginning to right themselves upward, the re-establishment of roots, and the re-orienting and growth of leaves," Quinn said. He noted that growth stage of the plant, soil moisture at the time of the wind event, root mass structure, hybrid planted, and the severity of the leaning or bending of the plant all factor into recovery.

University of Illinois crop specialist Emerson Nafziger wrote about various types of storm damage to corn when a similar event happened in Illinois in 2016. https://farmdoc.illinois.edu/…

That year, the environmental conditions in the regions hit were similar -- rainfall during the first part of June had been limited, but warm weather had the corn taking off.

"This has meant relatively dry surface soils, which encouraged roots to grow deeper," wrote Nafziger. "So, the crop was well-anchored by its root system when the wind blew."

That year, since soils were relatively dry when the winds hit, water uptake had slowed slightly, Nafziger said in his report. The drying soils mean the cells in the stalk were taking in a little less water. This decreased the internal cell pressure and decreased the tendency for plants to snap off at a node.

Corn roots can gooseneck (bend towards upright) after lodging, but gradually lose their ability to do this as the corn matures, or as the stalks become lignified. If plants are only bent over with their roots intact and still in the soil, they will recover faster and better than root-lodged plants, Nafizger noted.

Nielsen and Quinn both urge farmers to NOT make an assessment about wind damage the day after the storm. Instead, it is suggested that farmers give the crop four to five days to allow the damaged plants to demonstrate whether they will recover.

Simple leaning or bending of plants caused by strong winds represents the least of the types of wind damage, Nielsen wrote. "Such plants should recover most, if not all, of their uprightness and if this recovery occurs prior to pollination there should be little effect on the success of pollination," he observed in that report.

I've received several "helpful" Twitter messages indicating it was likely a specific brand of corn that went down. Thanks for those suggestions, but I find it doubtful that every flattened field in the many I passed were planted to the same brand. The planting date didn't seem to have much to do with the wind damage either -- even small corn was leaning.

Nor, would this amount of damage and the consistency of the flattened corn seem to indicate rootworm damage -- although we are coming up on a good time to do root digs to find out if traits and products are working. Here's a good item on how to assess that problem: https://ipcm.wisc.edu/…

This storm event left me with no choice but to put Chumbawamba's Tubthumping on my play list. The last two days all I've had this going through my head: "I get knocked down, but I get up again; You are never gonna keep me down." 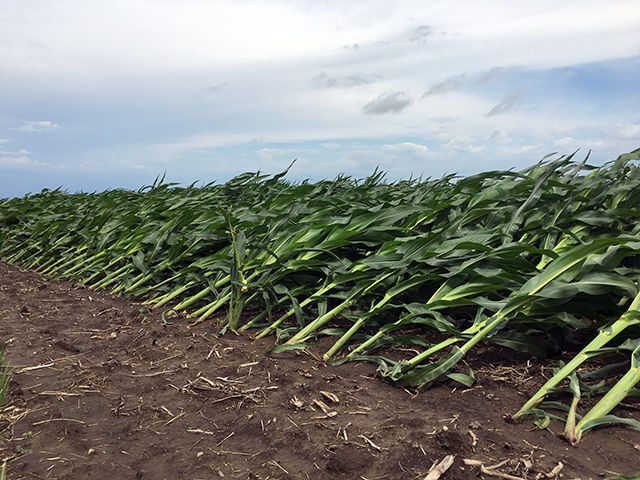