MT. JULIET, Tenn. (DTN) -- Open-outcry trading fell silent last March as the COVID-19 pandemic swept across the United States, and CME Group announced on Wednesday the silence will be permanent.

The exchange operator said all of its trading pits, known for their octagonal shape, will close permanently, with the exception of its Eurodollar options pits. A majority of agricultural commodities trade on CME platforms, including its electronic platform, also known as Globex.

DTN Lead Analyst Todd Hultman said the news didn't come as much of a surprise. After all, volume conducted in the pits had dropped sharply as more buyers and sellers turned to electronic trading options.

"Human pits had some pros, especially if you were on the inside track and had someone in the know in Chicago," he said. "But the reality is, for most retail customers out in the country, they were nothing but a pain. The fills and service are much better these days. It's a bygone era."

The first futures contract for agricultural products was traded in Chicago in the mid-1800s, a development that was widely credited with ushering a new era of price discovery for farmers. As floor trade became more sophisticated, traders developed a system of patterned jackets and hand signals to conduct business.

The first electronic trades were made on the Globex platform in 1992, and it rose rapidly in popularity as technology improved. As more trade shifted to electronic venues, activity in the pits tumbled. CME Group said open outcry trade accounted for less than 1% of its overall trading volume in 2015, when it closed the majority of its pits, leaving just 13 in operation. Wednesday's announcement now leaves one remaining.

Hultman said there are advantages to the modern electronic trade environment. "Even though the farmer goes through a broker, he can often sit at his laptop or maybe even on his phone and see fairly currently the bid-offers that are happening. He actually has a lot more control and information at his fingertips when he puts in orders, and he gets much better service about getting those orders filled."

While it's not the same as rumors that a major grain company just took a large position one way or another on the floor, Hultman said the CFTC's Commitments of Traders report does provide a pretty clear picture of how commercial and noncommercial traders see the market. Many traders such as farmers weren't in a position to benefit from those types of rumors anyway.

Among the biggest concerns with an all-electronic environment is high frequency traders potentially gaining advantages in the markets, but Hultman said that "Overall, in the country, the benefits outweigh any downside." 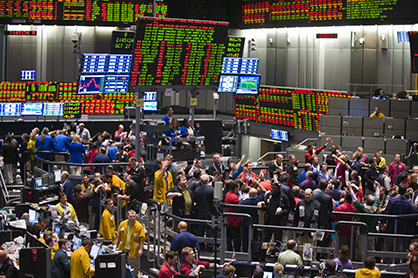