Death from grain entrapment is a tragedy by horrific suffocation. Tragically, entrapments are preventable -- fewer are accidents, more are the result of an intentional decision to enter grain bins even with evidence of risk.

Rarely are there witnesses to the outcome.

The film "SILO" does stand witness to those deaths, showing viewers what few see. Produced in 2018, its depiction of grain entrapment is coming with renewed vigor to screens big and small. Film distributor Oscilloscope Laboratory will re-release "SILO" on May 7. You can see the new trailer here: https://www.youtube.com/….

"It's a unique release, but an absolutely huge one for an indie film of our size. We're thrilled, to say the least," said "SILO" Producer Samuel Goldberg. "Oscilloscope gets the ethos of the film and the audience. 'SILO' is outside the box for them, but they believe whole-heartedly in its mission." Oscilloscope and the filmmakers are giving a portion of the film's proceeds to The National Fallen Firefighters Association.

"SILO" will be released in at least 215 theatres across 32 states. "SILO" also will be available to 97% of homes with cable via Video On Demand, iTunes, Vudu, Amazon, Google and all other paid platforms. And viewers will find "SILO" for rent and purchase, plus the list of showings, directly from https://www.silothefilm.com/….

"SILO" is not a grain bin safety film, done large. It is a well-done feature film, two stories of time -- one where the viewer instinctively feels death just seconds away and the other played out among the moralities of a small farming community.

Inside a grain bin, tragedy is unfolding. Eighteen-year-old Cody is trapped chest-deep in corn. Frank, his firefighter rescuer and calm encourager, buys seconds and oxygen a little bit at a time. When Cody chokes out a question about the fireman's plan, his response is: "We keep you breathing." Life is down to a breath -- the odds of the next one, bleak.

The fireman hangs from the rungs of a steel ladder. Cody struggles for breath in a place where the physics of moving corn make every shallow breath more difficult than the last. As he inhales, the pile squeezes tighter upon his chest.

In case we are to wonder at Cody's fate, we consider the man below him. He is the farmer Cody tried to save moments before. Viewers see that man sink helplessly into a vortex of moving corn, his cries silenced at once as he disappears, but for his hand. That rough, farming hand remains visible above the surface of the corn for a moment, then it is gone.

The fate of that man below Cody in "SILO" plays out in real-life entrapments nearly 60% of the time. If you are trapped in grain, there's a 40% chance you'll come out alive; there's a 60% chance you will die. It is also a historic fact that one in five of all agricultural confined spaces accidents involve young adults and children under 21. That was the case five times in 2018. No youth died from grain entrapment in 2020.

As a parent, the images in "SILO" made me ill the first time I saw the film. A camera pans up the side of a grain bin. The sound of an emergency call fills the image: "Two individuals involved in a grain entrapment." The wail of a siren brought me chills. Something very bad has just happened. Very bad. And no parent, spouse, grandparent, cousin, friend can fix it -- and, too often, neither can trained first responders.

In "SILO," Cody (played by Broadway actor Jack DiFalco) eventually sinks under the corn. Even on set, it was a frightening moment, said Goldberg. "It was horrifying for everyone involved. Our stunt coordinators did a fantastic job of planning, but it was frightening to see him underneath the corn," he said. "I think that is why that scene plays out so well, because (Frank, played by Jeremy Holm) and three firefighters digging with him were truly trying to get him out."

As a result of that accident, Rylatt co-founded and is a program director of the Grain Handling Safety Coalition in Springfield, Illinois, (www.grainsafety.org). The group has brought grain safety training to 4,900 people in 23 states. It is a wonderful resource for information on handling grain safely.

"(Grain entrapments) affect the whole community," said Jeff Decker, president and owner of Decker Consulting and Investigations, Lerna, Illinois. "('SILO') is successful by showing the reality and the horror. It showed the heart of the town and its people and shows how fast everything can go wrong." Decker is president of the board for the Grain Handling Safety Coalition. The coalition has partnered with "SILO" on its grain safety outreach.

But there is no end to fatalities. It didn't take long to find these.

-- April 20, 2021: Ivan "Buddy" Rivinius, 70, Stutsman County, North Dakota. A commercial crew had been loading grain from bins onto trucks. They lost sight of Rivinius before finding tools in one of the bins. His body was recovered an hour after rescuers were called to the scene.

-- March 9, 2021: Unknown man, Jackson County, Alabama. The man fell inside of the grain bin from the top of the bin. First responders cut into the bin to remove more than half the grain inside. The person was confirmed dead at the scene. His name is not available.

-- Feb. 3, 2021: Rick Wilson, 60, from Jamestown, North Dakota. Wilson was trapped after falling into grain. The incident was discovered after witnesses discovered a truck being loaded was overflowing with grain.

-- Dec. 30, 2020: Stephen Crocker, 29, Morgan County, Indiana. Reports say Crocker had pulled his truck under a grain silo to load corn. He stepped out of the truck and, shortly after, the silo collapsed, pinning him to the truck by as much as 500,000 bushels of corn.

-- Oct. 7, 2020: Ken Reece, 79, Eldora, Iowa. Reece was working around a grain bin when a door opened suddenly, covering him in about seven feet of corn. According to authorities, an interior, load-bearing door was left open, leaving only the outside door of the bin to contain the corn. The door failed.

NUMBER OF INCIDENTS IN 2020

Of 35 grain entrapments, 20 men died. The numbers were down a few from 2019, but 2020's incidents still exceed the five-year average. Illinois led the nation in 2020 grain entrapments (fatal and not) with 10. That was more than North Dakota and Minnesota combined, No. 2 and No. 3 in entrapments last year. Indiana and South Dakota round out the top five.

Purdue's confined spaces database contains information on 2,404 incidents between 1962 and 2020 that resulted in injury, fatality or required emergency extrication by first responders. Of them all, 1,442 resulted in death and 1,731 (72%) involved grain storage, grain handling and grain transport vehicles. Purdue researchers are convinced that 30% of all incidences are not reported.

A careful reader of the Purdue research will find that the word "accident" is never used. Researchers believe these "incidences" are preventable. "If the grain won't flow, it's already too late to debate what was or was not done to prepare the grain for safe storage," the report says. "The issue at hand is to remove the grain without putting anyone at risk of entrapment."

The following are Purdue's suggestions:

-- Always wear a harness and lifeline.

-- Never enter a bin where there is evidence of crusting on the surface or within the grain mass. If grain is removed from the structure and the surface has not flowed in toward the outlet, stay out. This is a clear sign that a large void has formed over the outlet.

-- If there is any sign that the grain is or has gone out-of-condition, it needs to be moved immediately. The condition of the grain will not improve if left in storage.

-- Perform all observations or unplugging efforts from outside the bin, at the top access hatch. If there is evidence of crusting, spoilage or excess heating, stay out. In some cases, long pipes, rebar or other probes can be inserted into the grain mass to break up crusted grain or trash that is plugging the outlet. Watch out for overhead powerlines when handling these long probes.

-- If the grain has become so crusted, or the floor outlets become plugged, that it cannot be removed according to the bin manufacturer's recommendations, contact a professional grain salvage service. These services are expensive but can save lives and salvage some of the grain. 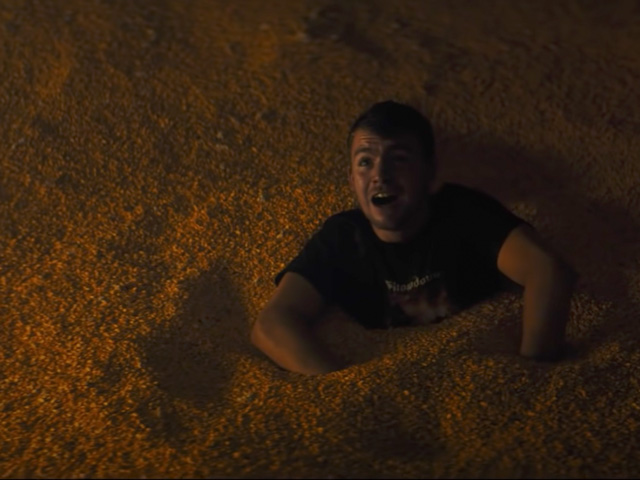