OMAHA (DTN) -- In a speech full of big-spending proposals, President Joe Biden made his case in a joint address to Congress Wednesday evening that the federal government can do more to rebuild infrastructure and pay more for education, social services and health care. But paying for trillions in new spending will require more taxes on corporations and wealthier Americans in the process.

Biden's first address to Congress allowed him to tout early vaccination success in his first 100 days with the economy also continuing to grow in the first few months of his presidency. Biden used his early success to make the case to Congress for "once-in-a-generation" infrastructure and social spending plans. History has shown public investments can transform the country, he said.

"These are the investments we make together, as one country, and that only government can make," he said. "Time and again, they propel us into the future. That's why I proposed the American Jobs Plan -- a once-in-a-generation investment in America itself."

Biden's infrastructure and social spending plans combine for more than $4 trillion in spending over a decade while the president also is proposing at least $1.5 trillion in tax increases to help pay for these programs.

Defending his plans to raise taxes on corporations and wealthy Americans, Biden pointed out how his economic plan counters the argument of cutting taxes for wealthier Americans to spur the economy. Biden contrasted 20 million Americans losing their jobs during the pandemic while 650 billionaires saw their net worth increase by $1 trillion.

"My fellow Americans, trickle-down economics has never worked. It's time to grow the economy from the bottom up and middle out," he said.

Addressing the question of taxes on farm estates and a plan to eliminate the "stepped-up basis," the U.S. Department of Agriculture issued a statement before Biden's speech. USDA stated Biden's tax plan would have special protections for farms.

"No capital gains taxes at death for family farms," USDA stated. "This plan includes a special protection for family-owned farms and businesses. It defers any tax liability on family farms as long as the farm remains family-owned and operated. No tax is due if the farm stays in the family. No one should have to sell a family farm they inherit to pay taxes and the president's tax reform guarantees that."

USDA's statement was countered by the National Cattlemen's Beef Association, which criticized the move to eliminate stepped-up basis, arguing it would lead to the conversion of farms and ranches into strip malls.

"To be clear, we firmly believe that it would be irresponsible to pay for an infrastructure bill on the backs of farmers and ranchers and with that, counterintuitive with this administration's conservation agenda. These provisions in the tax code are a determining factor in whether farmers' and ranchers' access to land is maintained for generations to come, or if that land is fragmented and further threatened by conversion and development, or paved over outright for strip malls and shopping centers," said Danielle Beck, NCBA's senior executive director of government affairs.

In his speech, the president pointed to 220 million Americans who have gotten at least one vaccination shot. He noted everyone over the age of 16 is eligible to get a vaccine.

Biden said the vaccine progress against the pandemic "is one of the greatest logistical achievements our country has ever seen."

"So, get vaccinated now," he said.

On USDA food assistance, Biden pointed to people waiting last year for Farmers to Families Food Boxes. "One of the defining images of this crisis has been cars lined up for miles waiting for a box of food to be put in the trunk," he said.

"Did you ever think you'd see that in America? That's why the American Rescue Plan is delivering food and nutrition assistance to millions of Americans facing hunger -- and hunger is down sharply already."

Looking at economic recovery, Biden pointed to 1.3 million jobs created in the past 100 days and economic growth this year projected by the International Monetary Fund at 6%.

The president said the country needs to move forward and not slow down. He then started to make the case for his infrastructure package. He called his proposal, the $2.3 trillion American Jobs Plan "as a once-in-a-generation investment" to upgrade the country's roads, bridges and drinking water.

Biden talked about the American Jobs plan replacing infrastructure, including rural broadband. "It creates jobs connecting every American with high-speed internet, including 35% of rural Americans who still don't have it."

The president said his plan would also modernize the electric grid. He pointed to the electric grid becoming vulnerable, "with tragic results as we saw in Texas and elsewhere during winter storms."

Biden also stressed that his plan to address climate change would overhaul the economy further and create more jobs in the process. The president also talked about climate change as part of the jobs plan, including installing 500,000 electric charging stations. But tying agriculture to the plan, he added, "Farmers planting cover crops, so they can reduce carbon dioxide in the air and get paid for doing it."

Biden said U.S. companies can compete in building wind turbines and electric vehicles as well. "And all the investments in the American Jobs Plan will be guided by one principle: Buy American."

He stressed that rebuilding U.S. infrastructure is a plan for spurring blue-collar jobs. "These are good-paying jobs that can't be outsourced."

The president also called on Congress to pass bills that would make it easier to organize unions, and to increase the minimum wage to $15 an hour.

Reiterating competition with China, Biden called on more investment in non-defense research and development. The U.S. needs to develop the products and technologies for products such as advanced batteries, biotechnology, computer chips and clean energy, he said.

Pivoting to his American Families Plan unveiled on Wednesday, Biden said the country needs "a once-in-a-generation investment in our families -- in our children." He proposed to expand public universal education from K-12 to include two years of preschool and the first two years of free community college. On top of that, the plan also calls for providing more aid for families to pay for child care.

Highlighting an increase in the Child Tax Credit to $3,000 per child ($3,600 for children under 6 years), Biden called on Congress to extend the tax-credit expansion to the end of 2025.

On top of that, Biden also wants an expansion of the Affordable Care Act. He also called on Congress to allow Medicare to negotiate lower drug prices.

Paying for all of this, Biden stressed his plan would raise taxes on those making more than $400,000 or more a year -- the wealthiest 1% of Americans -- up to 39.6% from 37%. Biden said the higher tax rate would go back to what it was in the early 2000s. "That's where it was when George W. Bush became president."

Yet, Biden's plan hits a nerve when it comes to taxes and agriculture over estates and the president's proposal to end stepped-up basis for wealthier Americans. Before Biden's speech, USDA issued a statement headlined, "The American Families Plan Honors America's Family Farms."

USDA stated, "The American Families Plan includes critical tax reform to ensure that the wealthy pay their fair share of taxes in order to finance essential investments in workers and families, including childcare, nutrition, higher education and more."

USDA pointed out the proposal closes a "loophole for wealthy estates so that enormous fortunes do not completely escape taxation." The plan would tax unrealized capital gains at deal above a $2 million exemption per couple. USDA stated, "But this won't affect family farms that stay in the family."

Under Biden's plan, about 2% of farm estates would owe taxes "on their non-farm assets" and 98% of farms would not owe any taxes "provided the farm stays in the family."

Biden also called for the country to pass immigration reform that includes "a pathway to citizenship for farmworkers who put food on our tables." Biden added, "Immigrants have done so much for America during this pandemic -- as they have throughout our history."

The president called on the country to come together and "do our part" and sought to make the case that his investment goals in infrastructure and social programs can make the country more prosperous. "It's never a good bet to bet against America," he said. "And it still isn't." 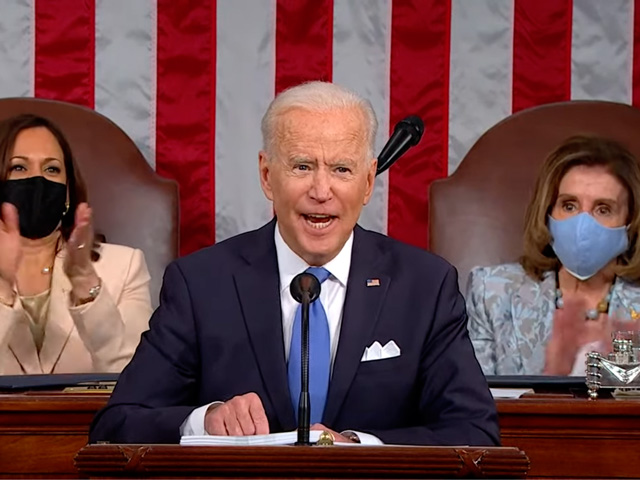