Pond-O-Gold farm began in 1884 when Brian Ponder's great-grandfather bought the original 96 acres of rolling cropland near Tifton, Georgia, to grow cotton. Over four generations, the family farm expanded from conventional-tillage cotton to the current 2,500 acres of irrigated, strip-tilled cropland rotated between corn, cotton, peanuts and watermelons. Fifty-eight center pivots keep the crops watered throughout the year.

The rolling terrain made the family an early advocate of terraces. "Because of the lay of our land and the fact we can count on getting 5-inch rains once or twice a year, we've had to build a lot of terraces and waterways over the years," Ponder explains. "In doing that, we've always had a good working relationship with USDA's conservationists dating back to the old 'Soil Conservation Service' days."

While still quite active in maintaining terracing and grassed waterways, Ponder and his brother, Ken, say their more recent experience with Natural Resources Conservation Service (NRCS) has helped them boost irrigation efficiency for significant reductions in labor and water use.

About 15 years ago, their local conservation district held a pilot program to retrofit center-pivot sprinklers to lower pressures and adopt more efficient nozzles, pressure regulators and booster pumps on the end guns, Ponder explains. Through that program, they used a 50% cost-share to overhaul four sprinklers at an average of about $4,700 each between 2006 and 2008.

"Like most irrigated farmers in our area, we were using top-mounted, high-pressure impact sprinklers and were losing a lot of pumped water to the wind and evaporation," he says.

"At the time, we were pumping with diesel engines and were told for every 1 pound drop of operating pressure, we could save a dollar on an inch of water applied," Ponder continues. "With $2 diesel, that was a good deal for us. And, in 2008, when diesel went to $4 a gallon, reducing our operating pressures by more than 50% really made a difference."

Thanks to the cost-share incentive and firsthand experience with an improved bottom line, the Ponders converted the rest of their center pivots over the next several years at their own expense.

"Without the incentive of the cost-share program, we'd likely never have changed what we were doing," Ponder says. "There's nothing like seeing the improvements on your own place to convince you."

Today, all of their center pivots use drops and I-WOB (Senninger's wobbler sprinkler head) nozzles to water well below the crop canopy. "After the corn is head high, we never see a sprinkler. They are very efficient," Ponder explains.

The brothers' pivots range from one-span units to a 1,900-foot rig, reflecting the rolling terrain and odd-shaped fields of the farm.

Between 2010 and 2015, the Ponders used another NRCS cost-share program to convert five of their diesel-powered pumping units to electricity at an average cost of $7,367 each.

While he can't pinpoint the actual economic savings from switching power sources, Ponder says the difference in labor and maintenance was evidence enough to immediately convert 11 more diesel pumps to electricity outside the cost-share program. Today, only two of the brothers' 58 pivots still burn diesel fuel.

"The electric motors are very efficient, but it's difficult to measure actual dollars and cents saved," Ponder says. "Still, when you have 58 sprinklers running on diesel, think of the batteries, the oil changes, the fan belts that break and the fuel that has to be hauled. All of that went out the window when we switched to electric pumps.

"To start a pivot now, we press a button. If it doesn't start, and it's not a fuse, we call someone to work on it. Before, we had crews working on engines constantly, and we'd have two workers hauling fuel to pumps every day."

The Ponders have been strip-tilling since 1993 and make heavy use of cereal rye cover crops to improve soils, reduce erosion and control weeds between the 36-inch rows. Improved irrigation efficiency has worked hand in hand with the cover-crop management to improve crop performance during the years.

"It's so hot and humid here, it's difficult to build soil organic matter," Ponder explains. "But, because of our irrigation efficiency and soil improvements, we've noted a 20% increase in cotton yields over the past 15 years.

"Peanuts, too, are more productive -- about 40% -- but a lot of that is due to varietal improvements," he continues.

Corn is new to the rotation, so yield trends have not been set.

"We've gone from 3.5 to 4.5 CEC rates to the 6 to 7 range. The higher the range, the more nutrient and water-holding ability the soil has," he explains. "So, with our farming methods and more efficient irrigation, we're seeing significant positive changes in yields and farm inputs."

In addition to using the EQIP program for various soil-erosion and irrigation-efficiency projects, Ponder says, the farm was one of the first in the area to be enrolled in the Conservation Stewardship Program (CSP).

"The good thing about CSP has been it rewards growers for conservation efforts they've already made and are doing," he explains. "I'm disappointed the rates have come down over the years, but CSP is a great program to provide farmers incentives for improving their management."

Still, as a district supervisor for his local soil conservation district, Ponder would like to see a more localized approach to federal conservation incentive programs.

"Currently, the incentives we originally enjoyed here in the CSP are not quite the same. It seems the program is now more designed for the Midwest. The things that benefit us aren't included any longer, and it's not quite as useful," he says.

Despite the program changes, Ponder says his county NRCS officials are cooperative, embrace progressive on-farm practices and are willing to help develop plans within program guidelines. 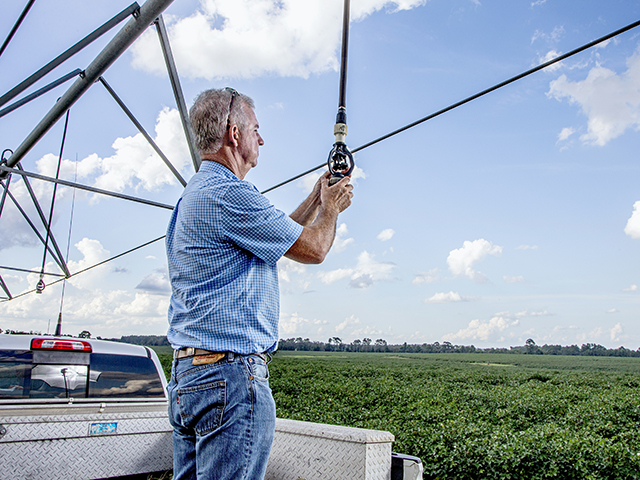