On a cool, sunny summer morning, Kari Olson is several rows into corn more than 6 feet tall on the family farm, near Hawley, in far west-central Minnesota. Kneeling under the canopy, you can see that there are actually three crops growing in the field -- on purpose.

Low to the ground between the corn rows are wisps of cereal rye more than 6 inches tall. And, if you scooch even lower, you can see the green, broad-leafed beginnings of a third plant, radish, breaking the soil. Kari is in her element.

"I believe the use of cover crops and switching to no-till has brought an abundance of life back to our soil," she says. Kari, 24, works with her father, Robert Olson, and followed his lead in this regard. "My Dad started cover crops six years ago as a way to hold nutrients from the manure applied in the fall. I do these same practices because I believe in the benefits."

She is among a small but growing cadre of farmers this far north who've considered or tried cover crops. Producers in the Upper Midwest have long feared that a cover crop would keep the soil too cool, too moist in the spring, potentially delaying planting. "Another big concern is whether we can get enough growth off of a fall-seeded cover crop before the frost hits to make it worth it and reap the benefits," Kari says. The reality is that some covers can help prep the soil for spring.

"In a wet spring, rye can absorb a lot of moisture to dry out and warm up the soil faster," she says. "Radishes help soak up moisture in the fall, and they also break up the soil and take up nutrients and return them to the soil as soon as they decompose."

In the field in which we're located, the rye seed was broadcast on the surface between the corn rows at the same time Kari was sidedressing nitrogen (N) on the corn. The corn was at the V4 to V6 stage at the time.

She mounted a Gandy unit on their sidedresser with hoses blowing seed in front of each coulter. There are deflectors in front of the coulters that spread the seed out across the row gap. In a particular corn field, she seeded 28 pounds of cereal rye per acre and 2 pounds of radish. "But, we are always experimenting and testing out different rates and species each year," she explains.

There is no one-size-fits-all. The Olsons have tried flax, field peas and lentils in cover-crop roles with varying levels of success. Kari concedes broadcasting seed depends on a timely follow-up rain for the cover crop to take hold.

"We've seen a lot of improvement in terms of infiltration in the soil using fewer passes along with the buildup of organic matter," she says. "This is a very slow process, but we're building, not deteriorating, the soil. It works for us."

Abbey Wick, an Extension soil health specialist at North Dakota State University, says she sees increasing interest in cover crops. There is more information and research on cover-crop use all the time, and producers are looking at cover crops because they want to better manage their soil.

"We see that farmers are using cover crops as a water-management tool," Wick says. They are able to soak up excess moisture, something that was prevalent in the region the past three seasons, including 2020.

Kari, who works part-time as an assistant to Wick in the winter at numerous farmer meetings, considers the specialist a mentor for her journey to continue improving their soil health. Those meetings have provided her the opportunity to hear the experiences of dozens of farmers as well as the latest research.

Among the recent findings about cover crops is that their ability to provide nitrogen may be less clear-cut than generally believed.

"In the Northern Plains, we're finding the nitrogen captured by a fall-seeded cover crop isn't necessarily available the next year or the year after that," Wick says. "I tell farmers not to count on anything right off the bat," Wick says. "We are still learning about our Northern Plains systems, and they should be prepared to sidedress N if they decide to reduce rates across the field to account for release from cover crops.

"The nitrogen might be available several years down the road -- it seems to be taking a while for some of these plants to break down in both short- and long-term soil-health systems," Wick explains.

Their heavy use of cover crops marks the Olson farm as different along with perhaps two other producers in the immediate area. Robert is responsible for the family-owned 1,600 acres, while Kari works with the landowners who own 450 acres they rent and 250 acres she's purchased on her own.

Kari can't point to an increase in yields as a result of cover crops and no-till, but there has been no decline. "We are noticing our inputs are decreasing the longer we are in it, and the soil is becoming so healthy and forgiving," she says. "Less inputs plus comparable yields equals more profits."

Kari rented her first land -- 120 acres -- while a freshman at North Dakota State University. She now shares management duties with her father and concedes their farm stands out a bit both because of their extensive use of cover crops but also because a woman of her age is running the operation. Decision-making is collaborative with her parents and eldest sister, who works at the farm part-time. Long-term management of the operation will be in Kari's hands as the fourth-generation farmer of the Olson family.

Kari doesn't promise any major changes but did begin this year growing rye for seed on 30 acres. She's doing this to reduce the chances of bringing in herbicide-resistant weed seed from outside their region.

Additionally, many proponents of balanced no-till and cover-crop systems recommend the use of livestock (generally cattle) to graze cover crops while providing nutrients in manure. Kari understands the reasons why and hopes to partner with someone on this in the future. "Right now I have my hands full and big shoes to fill," she says. 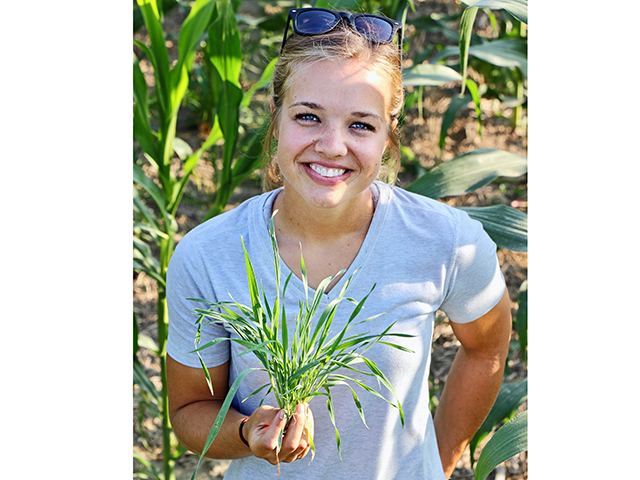