The winter 2020-21 forecast is dominated by the presence of a La Niña sea-surface temperature and barometric pressure pattern in the Pacific Ocean along the equator.

La Niña conditions began developing during the last half of the summer 2020 season. A fully developed La Niña tends to reroute the jet stream across North America, with sustained upper-level high pressure in the Gulf of Alaska and standing low pressure over eastern Canada. The resulting upper-air flow by and large leads to a warmer trend in the western and southern U.S., a colder pattern north, central and east, and widely variable precipitation.

Temperatures have a near- to below-normal trend. Precipitation shows a varied tendency, with snowy conditions in the northern Midwest and above-normal rain farther south, especially in the Ohio Valley. The colder pattern means a slower transition to spring, as well.

Temperatures have an above-normal signal. Precipitation will concentrate in the last half of the season with heavier rainfall in late season. There is also a higher risk of severe storm activity, which is a feature of La Niña winters in the area.

Warm and dry conditions are in store for this winter season. This will be a sharp contrast to the very active tropical system run during the fall. Drier conditions will be closely watched; crop season 2021 could begin with some soil-moisture deficits. Severe storm activity is also a strong possibility later in the season.

Dry conditions are in store with mostly above-normal temperatures. Soil-moisture reserves will be called on for the start of the 2021 crop season.

Temperatures have a variable track with a risk for cold conditions early in the season; a warmer pattern in January and February; and a return to colder trends in March.

Precipitation looks below average at the start, followed by a wetter trend later in the winter. Snow risk is enhanced for the Northeast.

The Northern Plains region is right in the track for the La Niña-influenced jet stream during this winter. Temperatures have a notable below-normal indication.

On the precipitation side, near- to above-normal amounts are in store; however, because of the colder trend, that moisture is likely to occur as moderate to heavy snow.

Above-normal temperatures are likely, although a few brief, intense cold spells are not out of the question. The lead topic, however, is the likelihood of drought enhancement because of the high relationship between La Niña occurrences and below-average precipitation. We may see some late-winter rain in the Ark-La-Tex area, which means moisture only for a portion of the region.

A warm winter is expected again. Precipitation has a below-average signal because of a lack of storm energy from the subtropics -- a hallmark La Niña detail. This means worsening drought conditions through the winter.

Differential temperatures are expected. Northern California and northern Nevada have a late-season risk of colder conditions. We may also see some late-season rain and snow provide easing of drought. However, the overall trend is still looking below average and unfavorable for significant drought relief. Wildfire risk is also a lingering concern as we get into the season.

Variable temperature trends are in store during the season. We look for a mild start to winter, followed by a steadily colder trend and lingering on the cold side into March. There is some promising news on the drought topic for the region in the precipitation trend. Rain and snow look to be above average for the season, including some notable rain and snowstorms. Drought improvement is expected with these occurrences. 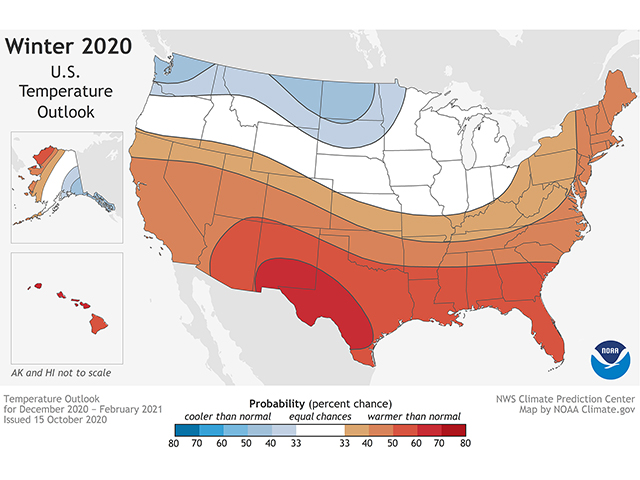