The Uriah, Alabama, producer either has hay custom-harvested from surplus, overseeded ryegrass pastures, bahiagrass, bermudagrass and crabgrass fields, or he buys peanut hay. Any way he gets it, hay adds up to an expense he can't afford to waste. Given the size of his cattle business, though, it's also a necessity.

Tucker likes to lay a foundation for his stocker feeding program with brassicas like kale and radish seed planted on a prepared seedbed. He does this any time after the first of August, preferably after a good rain.

Although he doesn't plant peanuts every year, he'll even broadcast brassica seed in front of his peanut picker in October, saying cattle can graze that in six weeks. "That's planting it late, but we use it to fill in the gaps when we don't have anything else growing."

Even better, brassicas are high quality, at 15 to 20% crude protein and 65 to 80% digestibility. Tucker says that's just right for the stockers he brings in, which are generally under 300 pounds and mismanaged.

With a timely rain, he'll have grazing in six to eight weeks, especially good for the lightest-weight stockers.

Come October, he puts the local ag pilot to work flying a mix of ryegrass, clover and kale on his almost-ready-to-harvest cotton. If he has a wild turnip problem on those fields, he'll leave out the clover and kale so he can spray for weeds.

Where the picker and boll buggy run over the emerging seed, the loss is minimal. "It will come back," Tucker says. "The worst places are where we build modules." In those bare spots, he'll often hand-spread ryegrass and clover seed.

On seeding rates, he adds, "We started out with a heavier seeding rate with the plane, around 50 pounds an acre; but every year, we've cut it back. Now, we put out 100 pounds per 3 acres."

On brassicas, he uses 3 to 6 pounds an acre, and with clover, he plants half the recommended rate.

In the fall, Tucker starts shipping his heavier stockers to western feedlots, either selling them outright or retaining ownership. The calves weigh 800 pounds or more, having gained around 500 pounds. From May through August, when the calves are on permanent pasture, Tucker shoots for average daily gains of 1.5 pounds. When they're on winter annuals, they'll gain at least 2.5 pounds a day.

After the first of the year, he'll ship more, and if he has any heavier cattle left, he ships again in May. He buys year-round at local stockyards, anytime he finds a bargain.

Once stockers are gone, along with his own calf crop, Tucker will let brood cows graze on the leftover winter grazing. He'll supplement them with gin trash and whole cottonseed starting around Thanksgiving, and running to mid-February, coinciding with calving season.

He has 15 small pastures ranging in size from 8 to 20 acres and says his goal is to avoid leaving cattle on these areas for more than one week. He believes rotation, especially the rest period, helps with forage growth.

The whole time stockers are here, Tucker supplements with hay, the gin trash, whole cottonseed and a 50-50 mix of corn gluten and soy hulls. His combination of grazing and supplement leave him with a cost of gain on stockers of around 55 to 60 cents a pound, although part of the cost of the winter annuals is charged to his row-crop operation since they do double duty as cover crops.

At the Virginia Tech Shenandoah Valley Agricultural Research and Extension Center (SVAREC), cutting down on hay-feeding days is a priority. For years, area producers have relied on fall stockpiling of tall fescue to extend grazing systems, but there is a drawback. Forage supplies can get tight while saving acres for stockpile or standing hay.

David Fiske, former superintendent of SVAREC, who unfortunately passed away in November 2018, found a solution with summer stockpiling. The practice continues today with Gabe Pent, who took on the role of superintendent and notes the combination of summer and fall stockpiling stretched the grazing season at SVAREC by an average of 90 days, usually into mid-January.

"That means we can graze an average of 280 days instead of the typical 210 days," he says. In dollar terms, that's a $36-per-cow savings by grazing rather than feeding hay.

Pent and his crew use eight paddocks, 2 acres each, for stockpiling. They keep eight of their 180 Angus-cross cows on those 16 acres year-round. Here, they practice both summer and fall stockpiling, as well as rotational grazing.

They start summer stockpiling in the spring, usually mid-April, when tall fescue typically begins to produce an overabundance of forage. They take cattle off 25% of the pasture, or in this case, two paddocks, and let it grow. In mid-August, they let the cattle back on the forage they stockpiled. At that point, strip-grazing, using a single strand of temporary electric fence to portion out two to three days of grazing, is the management tool of choice.

While the summer-stockpiled fescue isn't pretty to look at, it runs 59 to 74% total digestible nutrients (TDN), enough to support a dry or lactating cow.

While the cows are benefiting from the summer stockpile in August, September and into October, the cattle crew applies nitrogen to another 50% of their paddocks. These are set aside for fall and winter stockpiling. When summer stockpiles run out, the fall stockpile is ready to strip-graze.

Pent says, "Feeding cattle is the most costly part of a cattle operation. Here in Virginia, it is 50 to 70% of the total cost. Grazing is significantly cheaper than feeding hay. The longer we can graze and let animals harvest the forage, the better." 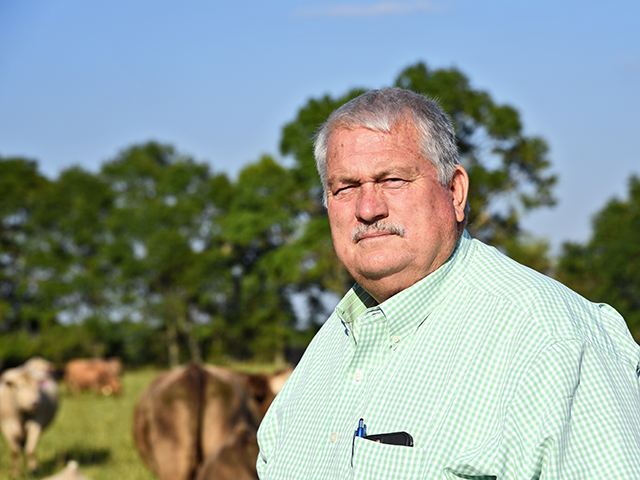