"We did have damage to some early-planted soybeans, but it will remain part of our program," says Robert Wieland, of Laura, Illinois. "It really gives you a yield benefit."

A recent multistate study led by Shawn Conley, of the University of Wisconsin, indicates soybean yields decrease 0.2 to 0.5 bushels per acre per day when seed is planted after April 25. Soybeans that are planted in mid- to late April will typically yield 5 to 10 bushels per acre more than those planted in mid-May, Conley and farmers who plant soybeans early agree.

"It's free yield you don't have to do anything to get," he explains.

Young soybeans are vulnerable to freeze damage when plants open up their cotyledons and expose their growing point to the air shortly after emergence. Several hours of freezing temperatures can damage or kill seedlings, reducing stands and yields.

From May 9 to 11, overnight temperatures plunged below freezing throughout much of the Soybean Belt. Lows ranged from 25 to 30°F in all or parts of states from Nebraska to Virginia and as far south as central Kentucky, DTN senior ag meteorologist Bryce Anderson says. The Delta and Mid-South were spared.

The odds of a Mother's Day weekend freeze is low, he says, but not uncommon. In this case, cold air in the Canadian prairies dived south thanks to a shift in the jet stream.

"Early planting is a potential benefit for soybeans," Anderson continues. "But, for crops that are freeze sensitive, there needs to be an appreciation that cold weather can cause damage in a short period of time."

About half the plants died, Wieland says. He interseeded the damaged fields planted in 20-inch rows at 80,000 seeds per acre, about half the normal rate, to compensate for the loss.

Conley recommends farmers in the Midwest wait until April 20 to plant soybeans to lessen the odds of frost damage. Even for farmers without a goal to plant soybeans early, that still occurred this year because of favorable field conditions.

In Illinois and Iowa, for example, 18 and 9%, respectively, of the intended soybean acres were in the ground by April 26. By May 10, the percentages ballooned to 43% in Illinois and 71% in Iowa.

Nearly 84 million acres of soybeans were planted this year in the U.S., according to the U.S. Department of Agriculture. Though pockets of frost damage occurred, Conley and three Iowa State University (ISU) Extension crop experts say it wasn't widespread enough to deter farmers who believe in early planting to abandon the practice. Here are several reasons:

> Crop insurance is available to cover replanting costs as long as planting doesn't occur before set start dates in each state.

"Soybeans are quite resilient ... and early planting has its benefits," says Mark Licht, ISU Extension cropping systems specialist. "There is still hesitation with ultraearly planting (early April through late March), which can lead to lost plant stands and slow emergence."

Rausch says he "lucked out" that seedlings likely weren't mature enough to sustain damage, and there was enough heat radiating from his black dirt to help. If a plant's cotyledons are still closed, that can protect it from freezing temperatures for several hours.

"It was a big concern," Rausch says of the freeze. "There was a little damage, but not enough to warrant replanting.

"I know there will be a year when I have to replant, there's no doubt about it," he continues. "I feel the benefits have far outweighed negative impacts so far." 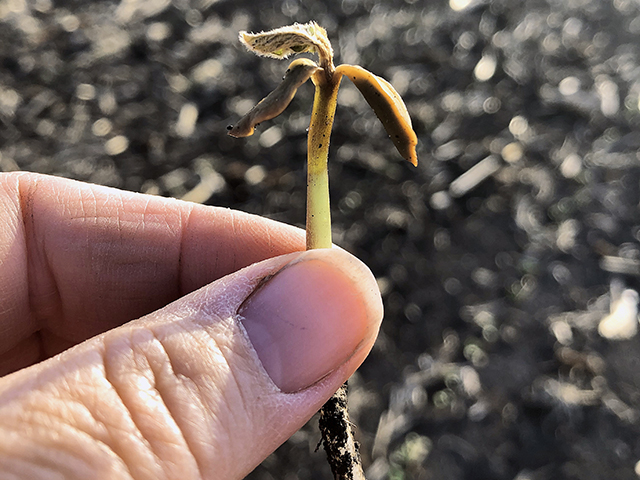