DYSART, Iowa (DTN) -- The first time a "once-in-a-lifetime" derecho slammed into Wade Wilson's farm near Dysart, Iowa, in 2011, all of his grain bins ended up in nearby fields. Winds in excess of 100 mph ripped the structures apart.

During the Aug. 10 derecho, Wilson's grain bins fared better. One 24,000-bushel bin was mangled to the point it will be torn down and replaced. Another similar-sized bin was creased near the top, but contractors were able to salvage the structure by pulling out dents so it could be used this fall. A third bin made it through the storm, in which winds hit 140 mph, unscathed.

It wasn't by chance the Sukup 50,000-bushel bin didn't succumb to the hurricane-force winds.

When it was built in 2012, contractors suggested three wind rings be added to the outside and one ring on the inside near the roof. The strong steel tubes add strength and stiffen the corrugated steel structure.

"Those wind rings are heavy," Wilson said. "The bin builder said this is an option many farmers don't add. I said, 'Let's give it a try.'"

Even though wind rings helped one bin survive the storm, that doesn't mean Wilson will spend extra money on the option again next year when he replaces and repairs bins damaged in the derecho.

"I probably won't, unless the builder highly recommends it," he added. "I will see what they have to say."

John Tuttle, director of sales for Brock Grain Systems, said grain bins by code are designed to withstand 105 mph winds for a three-second gust. This is the typical wind load for most of the grain bins in the Grain Belt. However, bins can be built to withstand stronger winds for longer periods of time, he said.

Construction options to do so include upgraded, heavier-gauge-steel body sheets; stiffeners; wind rings; stronger and possibly more anchor bolts; and a roof with a high load-carrying capacity, among other things. Depending on options, Tuttle said, increasing wind tolerance can increase bin costs by 20% to 25%.

Grain bins are often built to withstand winds exceeding 105 mph for longer periods of time in areas where hurricanes are prevalent, Tuttle said. But less so in the Midwest, especially on farms, he said.

"We can build a bin as strong as a customer needs, such as to withstand 140 mph winds. It just comes at a cost," Tuttle continued. "What is the chance this (derecho) will happen again over such a large area? Yes, the Midwest has tornadoes, but usually it's a small path. For (Midwest) farmers, it's usually not worth the money to hurricane-proof bins given the odds."

The freak August storm cut a destructive path from Nebraska to Ohio. Iowa was the hardest hit, with most of the damage in the middle one-third of the state.

Roger Price, director of grain sales in North America for GSI, said wind rings are standard on some bins and options on others. He said most Midwest farmers don't spend extra money to protect bins from extreme wind events since they are rare and insurance coverage usually includes replacement costs.

However, that could change. "There's definitely talk about what they (farmers) might do in the future to make bins withstand higher winds," Price said.

More than two months after the derecho, work continues to repair and replace bins at commercial elevators and farms.

Like all bin manufacturers and builders, Tuttle said the goal was to get as many elevators and farm bin sites functional as possible for harvest. The bulk of the repairs and replacement will be done after crops are out.

"It was a severe storm that caused unbelievable damage," Tuttle said. "There's way too much damage to get it all rebuilt in 2020. I see no issues to meet all needs in 2021." 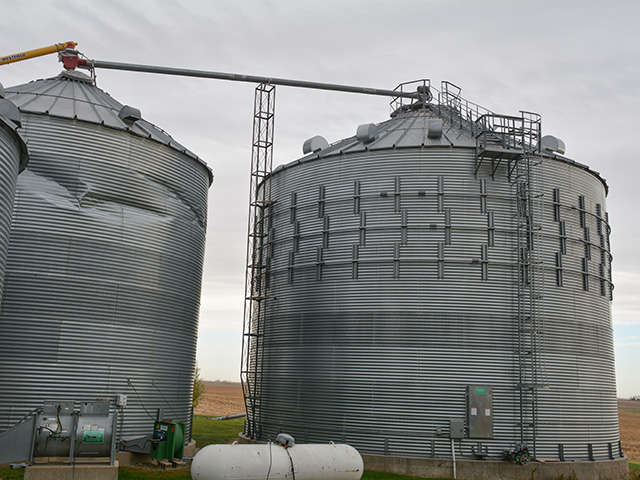