OMAHA (DTN) -- Rattan Lal, a soil scientist from Ohio State University and the 2020 Word Food Prize laureate, makes his case that agriculture globally must take better care of its most valuable resource to not only produce more, healthier food in the future, but also help remove greenhouse gases from the atmosphere.

Lal spoke in a livestreamed speech Monday evening to agricultural leaders at Iowa State University as the World Food Prize kicked off its weeklong International Borlaug Dialogue, which is a virtual event this year. The World Food Prize was created to recognize the work of global food and agricultural scientists to honor the legacy of 1970 Nobel Peace Prize Laureate Norman Borlaug.

With Lal's work based on rehabilitating soil health, several discussions this week with the Borlaug Dialogue center on themes of sequestering carbon in the soil and stopping soil degradation globally.

"I sincerely believe world peace is in jeopardy with soil degradation. If we want peace like Dr. Norman Borlaug said, we must provide everyone with a loaf of bread," Lal said.

While pointing to the risks of soaring populations and increasing climate instability, Lal said he personally believes the future is bright for agriculture, driven by new, accelerating use of technology and innovation. "In fact, more changes will occur between 2020 and 2050 than, I dare say, happened over the past 12,000 years, since the onset of settled agriculture."

At the top of Lal's list for innovation is "re-carbonization of the soil and biosphere" through technologies including intense use of remote sensing and targeted interventions for soil. He noted agriculture is just one use for the soil, given that 95% of antibiotics come from the soil, he said.

How people view soil must change, including new policies to protect the land if agriculture is to meet the growing demands for food in the coming decades, especially as cities continue to grow, Lal explained. Without protection of the soil, higher populations and increased greenhouse gases in the atmosphere will lead to further exacerbation of hunger, loss of farm ground and soil degradation. Protecting the soil, and building up organic carbon in the soil, also can lead to the soil sequestering more carbon and plants pulling more greenhouse gases out of the atmosphere, Lal said.

"And one way to do that is consider soil as a bank account -- carbon as a currency," Lal said. "If you want to increase organic carbon in soil similar to a bank account, the inputs going into the bank account must be more than the losses out of it."

Lal's soil-bank concept is based on whatever is taken out of the soil must be returned, as with a bank account. Drawing on Borlaug's Green Revolution, Lal said the 21st-century version must complement that with more soil resilience against climate change and innovations that adapt agriculture to increase organic carbon in the top 8 to 12 inches of soil.

To save in the soil, the organic inputs into the soil must be greater than the losses from soil erosion and runoff. That requires more crop residue, root biomass, biochar, compost and cover crops -- all of which build up the organic matter in the topsoil. Lal said.

The global impact of carbon sequestration through both farmland and forestry, over the length of a century, can accumulate enough carbon to draw down as much as 150 parts per million of carbon dioxide. In the effort to not just reduce, but lower carbon emissions, Lal said, "This is the low-hanging fruit. This is nature, land-based solutions."

Financially, Lal said, agriculture can sequester carbon as cheaply as $10 per metric ton, making agriculture the most cost-effective way to sequester carbon. Yet, farmers must be paid more than $10 per ton, he said, for an effective carbon-trading program. "The real price, based on the ecosystem services, is about three-and-a-half times more," Lal said. "And a farmer must be paid justly and fairly."

A farmer sequestering a half-ton of carbon per hectare should have a financial benefit of $65 per hectare, he said. That's $26 per acre, per year. "That's the proper payment for farmers if we respect this greatest tool of natural resources; to consider that we welcome what they do, that we appreciate what they do, society must be willing to pay them the right price," he said.

Lal praised a bipartisan bill in the U.S. Senate Agriculture Committee, the Growing Climate Solutions Act, which would create a certification program at USDA to reduce technical barriers for farmers and landowners who want to participate in carbon-credit markets. The Senate Agriculture Committee held a hearing on the bill back in June, but it has not advanced out of committee.

Lal has frequently advocated for policy that gives soil as much value in environmental protection as water and air. He notes the U.S. has both the Clean Air Act and the Clean Water Act, but it needs a "Clean Soils Act," which he compared to the Senate bill.

"This is something which has many core benefits, not just for climate-change mitigation and adaptation, but also food and nutrition security," Lal said. "And this is what I call soil-centric agriculture."

More resilient soil can translate into higher global yields, Lal said. Corn yields can increase 100 to 300 kilograms per hectare, Lal said, which breaks down to roughly 1.6 to 4.7 bushels of corn per acre. Soybean yields can increase 20 to 50 kilograms per hectare, which equates to as much as three-quarters of a bushel per acre. This is critical to help increase food production in sub-Saharan Africa, the Caribbean and southern Asian countries, he said.

"That is absolutely essential to improving food and nutritional security," Lal said. 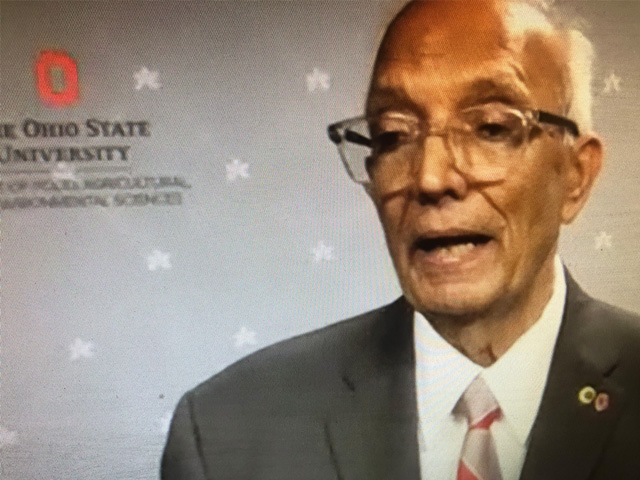