"My phone started ringing as the storm was going on -- that's a true story," said Voxland, president of Global Bin Builders based in Sioux Falls, South Dakota. "People called and texted me to ask availability and give me counts as bins were going down. They wanted me to save building slots."

Grain storage facilities and handling equipment took a beating from a freak storm called a derecho, which resembles on inland hurricane. The violent weather event started in southeast South Dakota and northeast Nebraska Monday morning and gained strength as it cut a destructive swath through the middle one-third of Iowa and continued into Illinois, Wisconsin and Indiana, gradually losing steam. The storm lasted 14 hours and traveled 770 miles, according to the DTN weather team.

All states affected lost grain bins and equipment, but Iowa was hit particularly hard. In 2019, Iowa's grain storage capacity was 2.1 billion bushels on-farm and 1.52 billion bushels off-farm, according to the U.S. Department of Agriculture.

Early estimates indicate more than 57 million bushels of permanently licensed commercial grain storage was seriously damaged or destroyed, according to the Iowa Department of Agriculture and Land Stewardship (IDALS). Co-ops estimate it will cost more than $300 million to remove, replace or repair the damage to grain storage facilities.

IDALS estimates tens of millions of bushels of on-farm grain storage was lost in the state due to the storm.

With harvest a little over a month away, farmers and elevator officials are scrambling to replace at least some bins and find alternative storage options.

"This may create grain storage challenges as farmers head into the 2020 harvest," said an IDALS statement.

Rick Kimberley, who farms near Maxwell, Iowa, said the storm damaged four bins on two farmsteads, rendering the structures useless. The bins collectively hold 260,000 bushels, about half of his farm's storage capacity.

"Now we're in the position of trying to figure out where to put grain," said Kimberley, who farms about 4,000 acres with his son, Grant. "Elevators have problems, too, losing storage. Who knows how much will get replaced."

Grain bin and equipment manufacturers, builders and elevator officials say they will do everything they can to get grain facilities operational before combines roll. But there's not enough time, workers and bin materials in stock to replace every bin that was destroyed by harvest. Builders say some will get rebuilt, but more grain bunkers and bags will be used to store this year's crop.

After assessing damage at several Iowa grain elevators this week and talking with managers, Voxland is confident facilities will be operational in some capacity. One stop was Key Cooperative's LeGrand, Iowa, location where a 375,000-bushel bin that Global Bin Builders just put up before the storm lay in a crumpled heap, along with most of the other bins at the site.

"Even though we are all still in shock, I'm amazed at the positive attitude the people I talk to have and how aggressively they're working to rebuild and make necessary repairs," Voxland said. "We're standing in front of total destruction in some places, but people are plowing forward.

"That's a great quality in people in the Midwest," she continued. "I think they (elevators and farmers) will get through it, and we will do whatever we can to help them get back up and running."

Global Bin Builders has four commercial crews and one farm crew that work in 14 states. The bulk of their business is in Iowa, Minnesota and South Dakota, Voxland said. She said the farm crew is booked on jobs through September in Minnesota. All commercial crews are committed to rebuilding facilities in Iowa, including Mid-Iowa Cooperative's Midway location and Key Cooperative's LeGrand facility.

"As long as manufacturers can deliver bins, we will be in Iowa working," Voxland said.

Roger Price, director of grain sales in North America for GSI, said the grain bin and grain handling manufacturer will work to get as many bins to contractors as possible in the coming weeks. GSI is owned by AGCO.

Price said GSI dealers have "some" bin inventory on hand to get builders going once damaged sites are evaluated, dismantled and readied for construction. Like most bin manufacturers, he said, the company operates on a just-in-time inventory model and manufacturers bins based on orders.

"We don't inventory very many complete bins," Price said. "For the most part, there isn't just bins sitting everywhere" that are ready to be put up.

He continued, "We have a lot of capacity to fill demand, but with harvest a little more than a month away, I don't think many will get built in time even if we had the materials ready."

Price said getting steel and other raw materials isn't an issue to make bins and grain handling equipment and dryers.

Two sister companies in Nevada, Iowa, are working to get damaged grain elevators operational. Mid-States Millwrights and Builders serves as a general contractor to build and repair commercial grain storage facilities. Mid-States Material Handling and Fabrication manufactures grain handling equipment such as conveyers and bucket elevators, two- and four-leg towers to move grain and catwalks, among other material handling equipment.

Shortly after winds subsided, Mid-States Millwrights and Builders had crews out assessing damage with their customers and lining up subcontractors (demolition companies, bin builders, electricians) to clear sites and start the reconstruction process. Global Bin Builders is a subcontractor for Mid-States.

"We're working to get as many sites up and running as fast as we can," said Randy Vier, senior vice president of both Mid-States companies. "It appears almost every grain facility (in the storm's path) had some damage."

With harvest only weeks away, Vier understands time is of the essence. Most won't be made whole, he said, but the key is getting facilities operational.

"It's about working with as many customers as we can and prioritize needs," Vier said. "Like getting a grain leg that blew down back up to feed bins that are still good and rebuild what we can. We're looking at solutions like more ground piles to make up for lost storage."

Mid-States is moving equipment from other sites such as reclaim conveyers to serve as fill conveyers. It's also moving equipment, such as towers and catwalks, from other customer sites out of state that weren't scheduled for installation until 2021 back to Iowa. That equipment will be manufactured and replaced at a later date.

Vier said it will take two to three weeks to get a bin from manufacturers, and he expects that to increase as orders mount.

"A California feed producer, which buys grain from the Midwest, allowed us to use their equipment set for installation next year in Iowa now," Vier said. "That's great cooperation."

Grain cooperatives in the storm's path say they are making plans to ensure farmer-members have a place to take their crops this fall.

Mid-Iowa Cooperative based in Beaman, Iowa, has 14 locations and 1,450 members. The co-op typically takes in 65 million bushels a year, but 9 million bushels of storage capacity was lost due to the storm, according to CEO Mike Kinley.

"We have a great team here," Kinley said. "We will rebuild our facilities as fast as you will see anyone do it. Farmers will have a place to take grain."

Kinley said six bins have been purchased to replace what was lost at Mid-Iowa's Midway location. Demolition is slated to begin Monday, and the first bin is set to be delivered Sept. 5. He said contractors will put up one bin a week as bins are delivered. The goal is to get at least four bins up with the main tower by harvest. A conveyer will also take grain to a new 2-million-bushel grain pile.

"We will have enough capacity at Midway with the pile and four large bins and wet bin to make it all work," Kinley said.

He added Mid-Iowa's Gladbrook location was virtually destroyed. It's unclear if the facility will be functional at harvest. If not, producers who normally take grain there will be directed to Midway, Beaman and Green Mountain.

Heartland Cooperative, based in West Des Moines, Iowa, sustained damage at 21 of its 71 locations in Iowa and Nebraska. No damage estimate was available or storage capacity lost.

The cooperative is busy assessing damage, ensuring electricity and natural gas is shut off for safety and lining up labor and equipment to cleanup and rebuild sites.

Bill Chizek, Heartland's director of safety, said the co-op plans to have all damaged locations open to some degree by harvest to serve its 5,800 farmer members. Replacement bins and equipment have been ordered with some materials arriving next week, he said, but not enough to cover what was lost.

"We will not get all locations up to speed by harvest because building materials aren't available as we need them," Chizek said. "We're planning on more covered piles."

Kimberley contacted his insurance agent and bin contractor shortly after the storm. He's still waiting for the insurance adjuster to tally the loss to make rebuilding plans.

Since it appears unlikely damaged bins will be refurbished or replaced by harvest, Kimberley plans to put more corn in plastic bags this fall like many farmers in his predicament. The family typically stores 100,000 bushels in bags for supplemental storage, but that amount may increase three-fold, depending on yields.

"I was expecting a bumper crop, possibly my best average yield ever at 250 bushels per acre," he said, peering out at tangled and flattened corn near his home earlier this week. "But losses from lodging and green snap could be 20% to 50% or more.

"Still, I need to order more bags," he continued. "They aren't as good as a bin but work in an emergency. And this is an emergency."

Plastic bags can be a convenient, safe, economical way to store grain, Birchmier said. Though some cooperatives may consider bags, he said farmers are his main customer.

"As I was cleaning up damage on my family's farm, it hit me that I better order more bags," Birchmier said Wednesday. "I've been fielding phone calls all morning about availability [of bags and equipment]."

"Right now, there's bags and equipment available, but that can change quickly with something like this," Birchmier said.

His family lost several bins in the storm totaling about 150,00 to 170,000 bushels. Birchmier said his contractor assured him that replacements on existing concrete pads could be up by harvest. The family planned to bag 100,000 to 150,000 bushels of corn before the storm.

"It seems far-fetched to me (bins getting rebuilt quickly), but I hope it happens," he said. "If not, we have bags if we need them."

Iowa State University (ISU) issued a statement after the storm about the importance of assessing grain bin damage. Here's the release: https://mcusercontent.com/….

When steel grain bins sustain wind damage, ISU engineers Shawn Shouse and Dirk Maier say careful inspection is needed to evaluate repair or replacement options. Condition of all components, including the bin roof, walls and foundation, along with any associated grain handling equipment and structures, must be evaluated.

The engineers recommend farmers and elevator officials consult with design experts before making decisions and consider whether modifications to the grain handling system are warranted as part of the rebuilding. 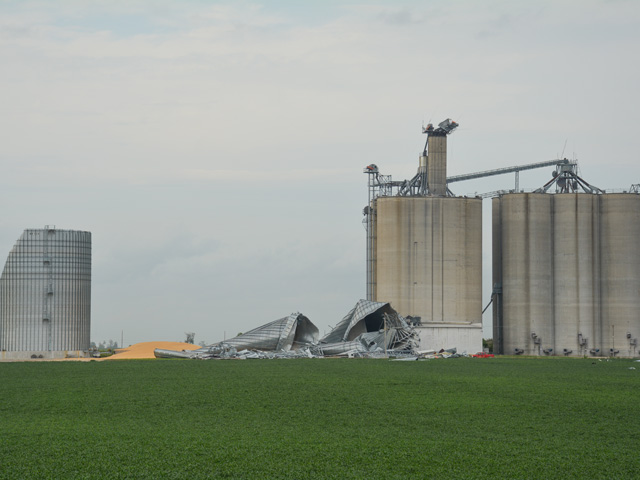