DECATUR, Ill. (DTN) -- Ryan Jenkins likes to say he's never worked a day in his farming life. It's not exactly true, of course -- there is a lot involved in raising crops such as cotton, corn, peanuts and soybeans, especially in the Florida Panhandle where a pop-up thunderstorm shows up nearly every afternoon during the summer.

This spring, the Jay, Florida, farmer, like farmers everywhere, is planting seeds into an unpredictable pandemic market. But even those uncertainties don't change the fact that he loves everything about producing a crop and living a rural lifestyle.

"I truly believe farmers need to be out there explaining agriculture so consumers have a better understanding of what we do and why," he said. "The world may be upside down right now, but who better to tell our side than those living it."

Jenkins comes to the field with a unique perspective on the subject of risk. In addition to farming, he's been a licensed crop duster and a paramedic on a medical helicopter.

This season, DTN readers can hear more about Jenkins Farms and his efforts to promote agriculture as an industry as part of a regular series called "View From the Cab."

Also reporting will be Reid Thompson, an Illinois farmer growing corn, soybeans and seed beans in McLean and Ford counties. Watch for more details about his farming operation next week.

This is the 15th year DTN has explored current crop conditions and various aspects of farm life through weekly View From the Cab reports.

"I can assure you there is more to Florida than Disney World and citrus," Jenkins said. "Commodity agriculture is important to this region."

Managing just shy of 1,900-acres, most of the Jenkins operation lies in the northern reaches of Santa Rosa County where the fields tend to be flat and fertile. His field sizes range from a 500-acre contiguous block to 15- to 20-acre patches. Likewise, soil types vary from sandy loam to red clay. Some of his acreage crosses into Alabama where the terrain is rougher and often terraced.

"We have some fields where you can meet yourself on the row more than once," he said.

Farm sizes tend not to be quite as large in this region. The expense of harvesting equipment that is specific to one crop and that pick or dig at slow speeds can keep a lid on the size of these farm, Jenkins noted.

The climate is tropical during the growing season and attracts about 65 inches of natural rainfall with afternoon showers frequently rolling up on the sea breeze from the Gulf. Hurricanes, and more recently a couple of mild earthquakes, sometimes add to the excitement.

"We will occasionally get a freeze during the winter, but for the most part, this area is hot and humid. That makes us ground zero for fungus and disease. We spend a ton of money on fungicides on all our crops," he noted.

Average cotton yields in this Florida production area can run from 1,000 pounds per acre (2 bales) to 1,500 lbs. per acre. Peanuts generally yield from 4,500 lbs. to 5200 lbs. per acre. While corn acreage is limited, Jenkins said it can average 200 bushels per acre, and it isn't unusual to see 70-bushel-per-acre soybeans.

Jenkins tends to split his acreage between cotton and peanuts, but some corn and soybean acreage slips into the mix. He also plants wheat and oats in the fall as a cover crop.

"If conditions are right, I try to spread the cover crop seed before we dig peanuts. The digger or inverter incorporates the seed into the soil. It saves a trip across the field in a time of year when we don't have time or manpower to make that trip," he noted.

Cover crops help suppress weeds and control wind and water erosion. They keep nutrients toward the top of the soil, conserve moisture and build organic matter, he said. Strip-till measures are also employed for conservation reasons.

While most cover crop acres are killed prior to the next crop, Jenkins allows a few hundred acres to go to seed -- growing his own cover crop seed needs for fall. He double crops those acres back to soybean or cotton.

Jenkins' great grandfather moved to this area from Alabama in 1918 -- his parents still live on the original farmstead. In the late 1960s, his grandfather experienced some difficult economic times and saw an opportunity to work for Monsanto when a plant was built about 45 minutes away in Pensacola. The family retained ownership of the land, renting it out, with the exception of 16 acres.

"PaPa Jenkins planted soybeans on those 16 acres every year until the 1990s," he said. His parents both made their living teaching school, but this 16-acre plot kept the family rooted to the land.

"My grandmother likes to tell the tale that, from the earliest age when quizzed, I would always say I wanted to be a farmer," he said. "If it had to do with farming or machinery, I wanted to be involved."

Before Jenkins could drive, he started working for a local crop duster -- loading planes and whatever else was necessary. He took a job with two farming neighbors who were brothers -- eventually swapping labor for use of their machinery to slowly grow his farming operation beyond the 16-acre plot -- starting by leasing back the original family land.

Smitten with flying, Jenkins also obtained a license and worked as a crop duster until Bt cotton and big-volume sprayers came along to make the hair-raising occupation short lived. "I wasn't willing to move to find work," he said.

Instead, he studied and obtained emergency medical technician (EMT) credentials and worked for 10 years as a paramedic on a helicopter for a hospital. The job, he said, was more dangerous than crop dusting -- and not just because that's where he met a nurse named Debra who would eventually become his wife.

"I always say I worked these other jobs to support my farming habit, but it got to the point where I couldn't grow the farm further because it seemed farm operations with sensitive timing always overlapped with a 24-hour shift on the helicopter."

The first year he "went big" was 1995. Hurricanes Erin and Opal decided to deliver a reality check as they both hit Santa Rosa County.

Eventually, his father, Rennie, retired from teaching and joined the farm as a partner. "Dad does 100% of the bookkeeping, and I am not exaggerating; he is such an important part of this operation, I do not know what I would do without him," he said. "He is so meticulous. I make things happen and he keeps track of it."

Debra still works in nursing and provides valuable income and medical benefits. Their son Cole, who just finished his freshman year at Florida State University, and their other son, Chase, a high school sophomore, make the fifth generation to work this land.

The professional path the boys take will be of their own choosing, but Jenkins is determined to make sure they and others are aware of their options. As president of the alumni association of the local FFA, Jenkins coordinated a countywide career day last year, and another is already in the works.

He also is involved in on-farm testing of crop inputs with the local farm cooperative. And he sells Trimble precision agriculture products through Vantage South. "It's been a good way to keep my hands on the technology.

"If you are going to be successful going forward, you have to get on the technology train," he said. "There just isn't enough profit left to haphazardly farm like we've always done it."

If there's one thing that drives Jenkins, it is learning the why behind how things work. "I can do things that make me feel good all day long, but until I have a way to check and measure it in my farming system, I really don't know what is working," he said.

Buckle up. There's a lot to dig into with this farmer who remains absolutely nuts about farming. 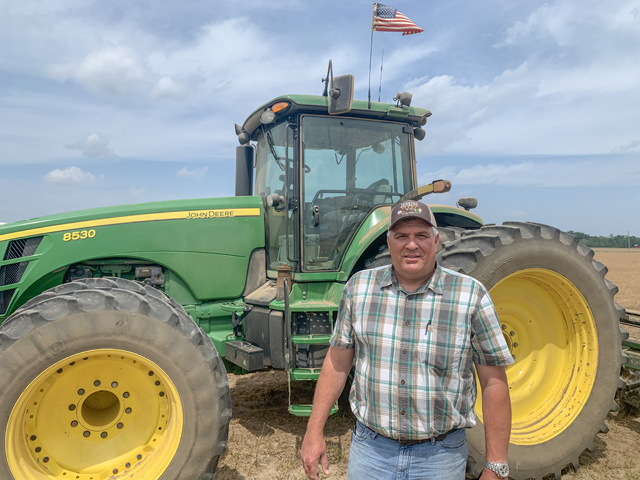