Nine years of side-by-side on-farm trials have given Rodney Rulon and his family partners an excellent look at the economic returns of cover-crop management on their fifth-generation farm, near Arcadia, Indiana.

Rulon Enterprises, made up of Rulon, his cousins Ken and Roy, and recently, Roy's sons Nick and Neal, switched to 100% no-till farming in 1989 and added cover crops as a management tool about 10 years later.

"It took us a solid 10 years to make no-till work and to learn what everyone can read about now in the farm magazines," Rulon explains. "By that time, we'd seen a lot of changes in our soil characteristics, an increase in the number of earthworms, improvements in soil aggregate size, and in general, we were happy with the improvements. Still, we thought it was time to take our farming to the next level."

After visiting with older farmers in the area who recalled "planting oats in the wintertime to feed the worms," the cousins found their interest turning toward off-season cover crops as a rotational tool.

"We started with oats and radishes, and by 2005, we had a significant number of acres in covers, and we liked what we were seeing in our corn and soybeans," Rulon explains. "We were actually seeing yield benefits of a few bushels per acre here and there."

By 2010, the operation, 30 miles north of Indianapolis, was using cover crops on 50 to 60% of its acres, and today, Rulon says his family has covers growing on 90% of the farm's 6,200 acres at some time during the year. He uses four different cover plantings or mixtures to accommodate early and late planting behind corn and beans.

"We're on our own now, but in 2011, we set up four 100-acre blocks of test plots on our farm to compare the performance of no-till-only management against three no-till plus cover-crop treatments," Rulon explains. "Originally, our treatments included oats and radishes, cereal rye and annual ryegrass.

"Now that the programs have expired, we plan to update the mixes in our farm trials, and the economic results alone are very favorable, in addition to the agronomic improvements we've seen in water infiltration and retention, soil structure and air exchange­ -- even after the cover crops have deteriorated in the field."

Based on 2018 records, the Rulons have four cover-crop mixes including:

In all, Rulon pegs his cover-crop seed cost per acre at $14.50 averaged over the four mixes used across his farm.

"Planting costs for our cover crops include tractor time, labor, fuel and planter repairs and wear, and pencils out to $8.20 per acre," he explains. "That gives us a total cost for cover crops per acre of $22.71."

Over nine years, Rulon says that roughly $23-per-acre expense has shown impressive returns on the investment.

"We figure our cover crops are saving us 20 pounds of phosphorus per acre and 30 pounds of potassium for a total of $14.35 per acre," he explains. "Based
on our plot data, you can add that savings to a 7.1-bushel corn-yield increase at $4 per bushel over the last four years, and a 1.95-bushel soybean-yield increase at $10 per bushel for a total annual benefit of $41.98 per acre."

Rulon says long-term benefits of his cover crops show drought-tolerance improvements. Based on 2004 through 2017 data, covers were responsible for 30 bushels of additional corn every fifth year, or six bushels per year at $4 per bushel.

Also, the covers can be credited with increases in organic matter, which produced an additional 2.7 bushels of corn per year at $4 per bushel. And, the elimination of 2 tons of soil erosion per acre over each year of the period equals another $4 to the good.

"Sum those per-acre benefits with a CSP Program payment during those years of $40,000, and you can add an additional $50.49 per acre in long-term benefits," he explains.

Overall, that works out to a return on investment of 254%, or a net profit per acre planted in cover crops of $57.76.

Like nearly every other farmer in the U.S., Rulon says the drought of 2011-12 was an eye-opener, although his experience carried a positive message.

"We had a severe drought in northern Indiana those years, but it wasn't as bad on our farm where we were using cover crops as it was on many other places," he explains. "We did get roots down, and we apparently conserved what water was in the subsoil. We actually had pretty strong yields for our area that year. They weren't bin-busters by any means, but it validated what we were doing with covers."

"Those summer droughts can really kill us here, but with no-till and cover crops, our fields seem to hold on and keep going until the next rain," he says.

Overall, Rulon says the no-till with cover crops has shown an average of 5 to 12 additional bushels of corn yield and a 3- to 4-bushel increase for beans. The farm's current five-year average corn yield is 196 bushels, and beans yield between 59 to 61 bushels consistently.

Also, he says the farm is using 10 to 20% less fertilizer than during conventional farming days, but many variables, such as regular grid-sampling, reduced soil erosion and improved soil organic matter levels, all can be credited to the savings, which go straight to the bottom line.

"We get enough on average over the past nine years to pay for the cover crops in yields alone, and then we get to talk about improvements in soil health, drought tolerance, erosion reduction and water-holding ability and runoff water quality," he says. "The bottom line is it's paying for itself on our farm, and then we can add all the other benefits."

Rulon says his farm's cover-crop evolution moved from oats and radishes at first to mixtures including rapeseed.

"Eventually, we began trying cereal rye, even though many older farmers in our area warned against 'ever planting cereal rye' because of their fear of grassy weed competition in subsequent crops.

"Sure enough, cereal rye is now one of the most used covers in our area, particularly behind corn and beans, when there's not much heat left in the season. That's because other covers won't grow well in the shorter days and cooler temperatures of our autumn," he explains.

Today, the Rulons seed cereal rye on only about a quarter of their corn and bean rotation, saving the small grain predominately for acres behind very late corn or soybean harvest.

Overall, the Rulons say they have had little problem with termination of their covers, regardless of the height of the residue at planting.

"Early-planted cereal rye might get 18 to 24 inches tall when we have to terminate, while that planted at Thanksgiving may only be 8 to 10 inches tall," Rulon explains. "It all depends on winter growth and spring timing. In an ideal world, we'd like to have it 12 to 18 inches tall, but we've had it as tall as 4 feet, although we certainly don't prefer that."

Termination chores are handled primarily by 2,4-D and glyphosate.

The Rulons plant their covers with a 40-foot John Deere 1990 air seeder, which is reserved for cover crops only. The machine sees 5500 acres a year. 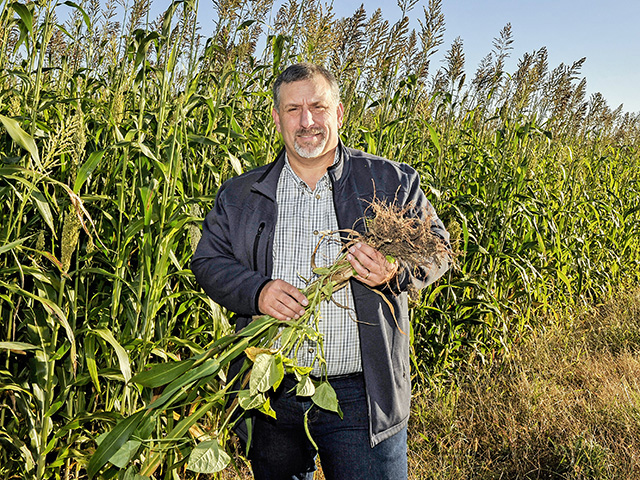