In each yellow kernel of corn there is life. It feeds our livestock and ourselves. It moves us along our roads. It adds strength to our homes. It is a foundation for beauty, and it protects us from disease.

And in that same kernel is death. It takes eight seconds for life to be engulfed in yellow gold.

It is entirely preventable. "It" is horrific suffocation.

It was a thought on my mind as I settled to watch the feature film "SILO," a new, fictional, based-on-reality story written around grain entrapment. "SILO" is not a grain bin safety film, done large. It is a well-done feature film, two stories of time -- one where the viewer instinctively feels death just seconds away and the other played out among the moralities of a small farming community.

Inside a grain bin is tragedy unfolding. Eighteen-year-old Cody is trapped chest deep in corn. Frank, his firefighter rescuer and calm encourager, buys seconds and oxygen a little bit at a time. When Cody chokes out a question about the fireman's plan, his response is: "We keep you breathing." Life is down to breath. The odds of the next one look increasingly bleak.

The fireman hangs from the rungs of a steel ladder. Cody struggles for breath in a place where the physics of moving corn make every shallow breath more difficult than the last. As he inhales, the pile squeezes tighter upon his chest. In case we are to wonder at Cody's fate, we are reminded of the man below him who Cody tried to save. Viewers see him sink helplessly into a vortex of corn, his calls for help silenced suddenly. A hand remains visible, but only for moment.

That man's fate plays out in real-life entrapments 50% of the time. If you are trapped in grain, there's a 50-50 chance you'll come out alive; a 50-50 chance you'll die. It is a historic fact, as well, that one in five of all agricultural confined spaces accidents -- a term including grain accidents -- involve young adults and children under 21. That was the case five times in 2018.

The second story of "SILO" builds outside the grain bin. This is a story familiar to too many in rural America, where real grain-related accidents happen three, four, five times a month. "SILO's" farmer, who goes by the name "Junior" and who is Cody's employer, the volunteer fire chief who tends the gas station, and the knowing sheriff are familiar characters everywhere in rural America. They all put aside differences and personal demons to rescue the son of a small town.

Let us not forget the guttural anguish of mothers in these tragedies. Cody's mother clashed with him, an aspiring punk rocker, only that morning. Now she listens to his latest musical track through earphones, digging past the scream and crash of guitars and drums, straining to find peace in what might be the last remnant of her son's voice.

As a parent, "SILO's" images made me ill. A camera pans up the side of a grain bin. There's an emergency call: "Two individuals involved in a grain entrapment." Then the wail of that first siren. Something very bad has just happened. Very bad.

Purdue University's Agricultural Safety and Health Program documents incidents involving grain storage and handling facilities at both commercial and on-farm locations. It also tracks incidents involving grain transport vehicles (trucks, wagons, railcars); injuries occurring inside of confined spaces due to exposure to powered mechanical components, such as augers; falls from or into confined spaces; and other types of agricultural confined spaces, including forage storage silos, storage tanks, and manure storage and transport facilities.

Its newest report was released earlier this summer. Between 1962 and 2018, Purdue has documented 2,050 cases that resulted in an injury, fatality or required emergency extrication by first responders. Of them all, 1,462 (71%) involved grain storage and handling facilities, of which 1,225 were reported as entrapment or engulfment in grain. Of all cases documented, 1,214 (59%) were fatal

In 2018, Purdue tracked 61 confined space accidents -- 13% more than in 2017. Of these cases, there were 30 documented grain entrapment cases, 46 reported falls into or from grain storage structures, seven asphyxiations due to deficient oxygen levels or toxic environments, and 11 equipment entanglements that occurred while working inside or around confined spaces. Grain entrapments accounted for 49% of the documented cases. Half of victims trapped in grain died.

In 2018, the states with the most documented confined-space cases of all types, including fatal and non-fatal, were Iowa (eight), Illinois (five), Nebraska (five), Ohio (five) and Wisconsin (five). Overall, incidents were documented in 23 states in 2018.

As a result of that accident, Rylatt co-founded and is program director of the Grain Handling Safety Coalition in Springfield, Illinois, (www.grainsafety.org). The group has brought grain safety training to 4,900 people in 23 states.

"I'm concerned about this harvest. The grain is going to be coming in fast and wet," said Rylatt. "This could be a bad time. Safety needs to be put at the top of the list."

In "SILO," Cody (played by Broadway actor Jack DiFalco) sinks under the corn. Even on set, it was a frightening moment, said producer Samuel Goldberg.

"It was horrifying for everyone involved. Our stunt coordinators did a fantastic job of planning, but it was frightening to see him underneath the corn," he said. "I think that is why that scene plays out so well, because [Frank, played by Jeremy Holm] and three firefighters digging with him were truly trying to get him out."

In "SILO," the name "Sukup" appears (oddly, maybe) all over the film. The company's name is clearly on the bin where the entrapment occurs. Why would a grain bin company associate itself with a grain bin tragedy? Sukup built a bin on the Kentucky farm where much of "SILO" was filmed. It also built the set in Iowa where scenes inside the bin were shot.

I talked to Steve Sukup, CFO of Sukup Manufacturing, in Sheffield, Iowa.

"We took a big gulp," he admitted. "Do we want to be involved in a grain entrapment [story]?"

But, he said, the company's leadership came to believe "SILO" tells an important story about entrapment. Few ever see the horror of an entrapment. "SILO" does not allow the viewer to turn away from it.

"When Dad [character in SILO] starts the motor, the machinery runs and the grain starts to move. You know what's going to happen. When the emergency truck rolls out, the siren, it hits you then," Steve said. "We want people to be aware of this impact."

Note: Sukup bins come with a number of safety features, including a restraint mounted near the manhole for use with a lifeline and safety harness.

"[Grain entrapments] affect the whole community," said Jeffrey Decker, president and owner of Decker Consulting and Investigations, Lerna, Illinois. "The movie is successful by showing the reality and the horror. It showed the heart of the town and its people and shows how fast everything can go wrong."

Decker is president of the board for the Grain Handling Safety Coalition. The coalition has partnered with "SILO" on its grain safety outreach.

Always lock out and tag out an unloading system before entering a bin. Communicate. Know for sure if someone is in a bin. Ensure someone is standing outside the bin. Assure someone has cell service in case of an accident -- someone who knows how to call 911 and tell first responders exactly where you are.

Always wear a harness and lifeline. It takes 30 seconds to put one on -- 30 seconds for life.

Watch this movie. Go to: www.silothefilm.com to schedule a viewing in your community. It would be well worth the discussion that will follow. Go to the website to make it happen.

Stan Blunier, a farmer and board member on the Grain Handling Safety Coalition, knows of three grain fatalities within 10 miles of his Forrest, Illinois, grain and hog farm.

"Almost anyone you talk to knows someone who has lost their life. It's always personal to someone."

In July and August this year, six more real people lost their lives in grain-related accidents. Here are the dates, names and hometowns: 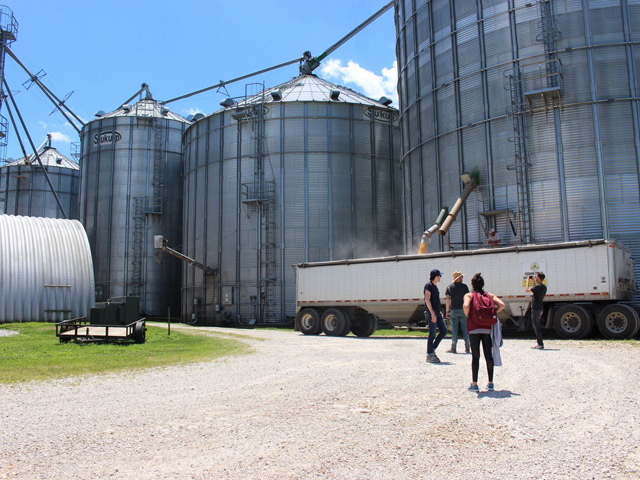