The Manchester Farms team switched to soybeans, but the going was slow, and time was running out. That's when Caleb's father-in-law, Tim Manchester, suggested using the corn planter. At 80 feet wide, it would cover more ground, but in 30-inch rows.

"It was not a decision I was excited about," Caleb said. Wider rows leave more room for weeds, and they'd have to skip some of their usual tillage. But, once the corn planter joined the soybean planter and grain drill, he knew it was the only way all of the treated soybean seed in his shop would get into the ground.

It's Caleb's ninth spring on his wife's fifth-generation family farm near Lakeview, Ohio, and the third at its helm. He spent most of his career in commercial construction, and while managing labor, materials and equipment translates well into agriculture, this growing season has emphasized the differences.

"You can always work harder in construction. The harder you worked, the better it got, and I'm finding that that's not true in agriculture, because we're so dependent on the weather," he said.

Wilson said this growing season has left him humble, and it's taught him the best-laid plans, for crops or careers, rarely work out how you think they will.

Even though his family doesn't farm, Caleb said it's in his blood. He grew up in Indiana helping his neighbor scoop horse manure and bale hay, and loved the two summers he traveled to Iowa and spent detasseling corn. College friends called him a farm boy.

He was working in construction in Florida when mutual friends introduced him to his now wife, Karen, who was visiting from Ohio.

As committed Christians, they share a passion for cross-cultural work. Caleb went to Indonesia following the 2004 tsunami to help rebuild roads and infrastructure, and Karen spent two years teaching English in the Middle East. In the years that followed, they considered different mission opportunities in countries like Turkey or Pakistan, but nothing ever quite worked out.

In 2008, the Great Recession hit the construction industry. Caleb was still employed, but the stress was mounting. Then the couple had their son.

A year later, Karen and Caleb moved back to the farm.

Tim Manchester and his wife, Martha, never pressured any of their three children to come back to the farm and thought they'd just rent it out when it was time for Tim to retire. To them, the farm was just a thing.

"I don't think we ever had the nostalgic feeling of, 'Oh my gosh, we've got to keep this in the family,'" Martha said, but they were happy when Karen and Caleb expressed interest.

Caleb helped with harvest in 2010 and started at the farm full time in 2011. He spent the early years learning everything he could from Manchester Farms' employees, a couple of whom have been at the farm for more than a decade.

"Without them, I wouldn't be farming," he said.

As Caleb earned more responsibilities over time, they realized he and Tim approached the job with different mindsets and communication styles. So, they worked with a consultant to help the farm transition, not only from one generation to the next but from one leadership style to another.

In 2017, Tim decided to retire and allow his daughter and son-in-law to run the farm.

"I think that was easier to do than we ever thought it would be," Martha said. "God has opened doors, and he's doing things that weren't on the radar, fulfilling things," like playing trombone in the pit of a musical, volunteering in a prison ministry and going to Africa to work with farmers. Caleb said he relies on Tim's wisdom and guidance more than ever.

BUILDING ON A LEGACY

Manchester Farms primarily grows corn, soybeans and wheat now, but it's seen a lot of changes since it was founded in 1858. With a rich history as an early adopter of technology, each generation made decisions that shaped the farm as it is today.

Caleb is working to build on that legacy by specializing in identity-preserved crops.

"I want every bushel this farm raises to get a premium on it," he said. While that includes popcorn and seed beans, it also includes non-GMO and organic production. This year, he even planted 66 acres of malting barley, which unfortunately didn't overwinter well enough to keep.

"As the consumer has demanded more transparency in the market, we've found more opportunities to make a profit. If the market is demanding a non-GMO crop or identity-preserved crop, I'll be glad to give it to them," he said.

But he also sees it as key to keeping the farm in business for the long term.

There are several very large farms in the area, and it'd be an uphill battle to try to compete on cost of production.

"There is only one lowest-cost producer," Caleb said. "For me, rather than growing more volume in terms of acres, I'd rather have a larger profit margin on each bushel of production. Specialty grains are going to be my niche and enable us to continue to be profitable and sustainable."

Even though identity-preserved crops are a critical piece of his farm's long-term plans, Caleb knew he had to put some of those plans on the shelf this spring.

"We were so delayed by the weather this spring that when we finally got in the fields in June, we had humongous weeds that we couldn't control with some traited products," he said.

He called his seed supplier, who delivered 800 units of Enlist soybean seed within 24 hours. Able to kill weeds and plant in close succession, Manchester Farms wrapped up planting on June 29 with more acres of soybeans than the farm had ever grown before. Less than 10% of the farm went unplanted this year.

"I'm learning that you've got to be able to adapt as part of risk management," he said. "I'm not sure I'm great at it, but I'm working on it." 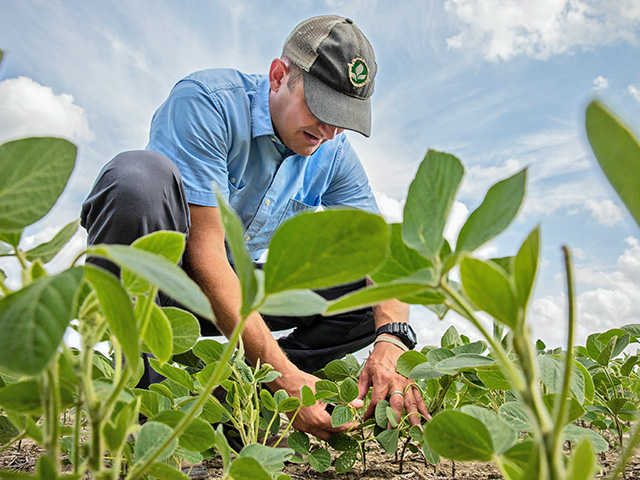