Pride for what they've built, ambition to keep it growing and awe at the absurdity of it all swirl together when members of the Welker family tell their story. It's about how they've found the most unique ways to survive on ground where comprehensive farming know-how can still sometimes only bring 40 bushels per acre of wheat.

Bob, the third generation on the farm, and his sons, Scott and Nick, farm 10,000 acres in Montana's northern plains, because that's how much it takes to make ends meet anymore. The trio comprises Welker Farms, growers of peas, wheat and lentils--little different from their grandfathers. But, in a twist those generations could have never conceived, the Welkers are also behind one of the fastest-growing agriculture channels on YouTube.

Social media influencers are the darlings of the marketing world, capable of offering the kind of organic advertising that's almost priceless. Top influencers using platforms such as Instagram, Facebook and YouTube can pull in millions of dollars annually.

Still, sometimes the Welkers feel as if they're tossed into a hurricane, like it's all happening incredibly fast and from every direction.

"It can be a lot," Nick says, settled into a black couch in a small office carved out of a machinery shed on their property.

As their popularity grows, they're battling to maintain their authenticity and stay loyal to their fans while also reckoning the tremendous potential they see: the opportunity to serve as agricultural ambassadors to a world disconnected from real food production; a chance to entertain and inspire a huge crowd; and, just maybe, a way to keep the family farm running.

The Welkers' most popular videos have been seen more than 2 million times. They receive so much fan mail--letters from all ages, art projects from children, even job applications from Ukraine--they had to get a separate post office box. They receive so many visitors despite their location in a distant region of a vast state, they have to put signs at the end of their driveway during harvest that reads, "Visitors by appointment only."

They are familiar enough with the attention that they aren't surprised when they're recognized at the Walmart 90 miles away in Great Falls, Montana. But, they're not so used to it they stay in their chairs when an unfamiliar SUV kicks up a cloud of dust driving down their dirt road outside Shelby, Montana.

"Fans, I think," Scott says one July evening, leaning into a windowsill to watch the vehicle slowly approach.

Not long ago, they sought to reply to every comment posted to one of their videos and to answer every technical question about one of their rebuild projects. Now, there can be more than 1,000 comments in a week and dozens of questions and small requests.

"You want to help everyone," Scott says, "but you just can't."

One of the original draws to the channel was Big Bud tractors, and that engine still drives traffic.

The Welkers run two of the legendarily powerful behemoths, some of the strongest tractors ever built. Time-lapse videos documenting the refurbishment of those machines rank among the page's most popular.

Other viewers have come from the Farming Simulator video games, where dedicated fans have created an in-game replica of the Welker farm, expanding the family's brand around the globe. Many fans are entirely unfamiliar with agriculture.

"There's a huge disconnect with ag and people's lives," Nick says. "They might think we're killing the environment, polluting this or hurting that, but they don't realize the science that goes into it. They don't understand how difficult it can be and how we put everything on the line every year."

The viewers embrace the family. They know almost as well as the Welkers themselves what machinery is on the farm. They come up with nicknames for equipment and family members.

Scott, "LegArms," has muscled arms so thick one viewer joked they could be legs. Nick, "Hollywood," is always in front of the camera.

For as much as the brothers now share, it's their vast differences that make their channel really work.

Nick never seemed destined for the family farm and actually left to attend college in Colorado and earn a pilot's license. When he did return, YouTube helped him find joy in the life.

The channel started in 2011 and has grown in polish and focus, but from the start, creative fun and inventive videography have been hallmarks.

One of Nick's first big projects was an elaborate tribute to the family farm's centennial. He sought to document a year on the farm, mounting GoPro cameras to everything from the cultivator frame to the combine reel.

Scott, meanwhile, is the natural born farmer and mechanic. A battle with dyslexia made school a struggle, but farming always made sense.

"When I left high school, I could barely read a four-letter word," he says, "but, I was always fixing stuff. I was good with my hands. I always knew I'd have a farm."

YouTube took some convincing for Scott, especially when it got in the way of farming.

"Once Nick wanted to harvest a certain field where he knew the light would be perfect," Scott says. "We had to get the combines there an hour away. I bit my tongue so hard, but when I saw the video, I realized, ‘This is really cool.'"

There are two ways to make money on YouTube.

First, video creators generate earnings from ads YouTube runs on their videos. That's hovered at about $5 per 10,000 views for the Welkers. There are expenses, too. Nick began outsourcing video editing when he grew weary of 15-hour editing marathons just to produce one 20-minute video.

The second way to make money on YouTube is through sponsorships, and those can be more lucrative.

Companies were quick to try to reach out to the Welkers as their own reach expanded. At first, it was flattering when any company sent a free product to the farm just to be featured in a video.

"Now, we just ignore that kind of stuff," Nick says. "People are always asking. If it's a big farm thing that has value to us, I'll look into it more."

One of the family's Case IH combines got a giant tire upgrade recently, a demo from a sponsor. It made for a strong video, too, with more than 400,000 views in its first month. Case IH, in turn, has hosted the family at several recent farm shows, allowing the Welkers to greet fans in the company's booth.

Mainstream social media influencers routinely are able pull in cash payments to feature a product, but that's not as common in ag YouTube. Instead, some influencers get favorable or even free lease opportunities on equipment.

"Ag is a different world," says Michael Kirkpatrick, who works with ag influencers through the Kirkpatrick Creative ad agency.

"The ag customer wants a genuine referral from someone who's used the product," he says.

The YouTube channel has grown as the farm has expanded, though it's not yet kicking in enough money to have a major effect on the operation's bottom line.

"It very well could someday, though," Nick says. "It's on its way. It couldn't ever be a substitute for farming, but it could help." 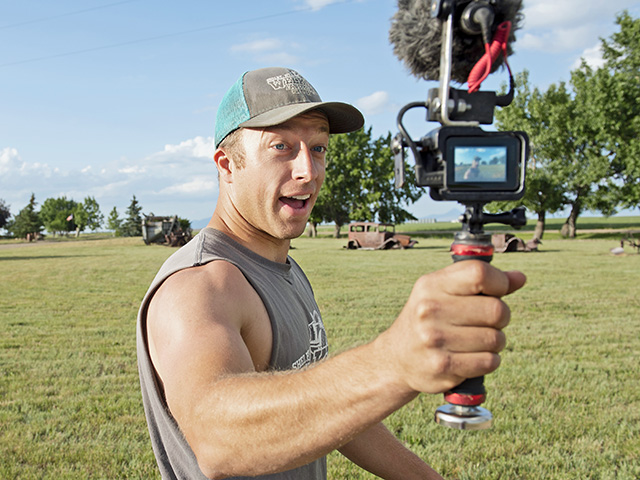