BROOTEN, Minn. (DTN) -- As Jerry Jennissen stood before a group of guests eating a light salad, he explained the history of his central Minnesota dairy farm from the Homestead Act up to when he and his wife bought the place in the early 1980s.

Jennissen described how Jer-Lindy Farms grew into Redhead Creamery, named for the Jennissen's four redheaded daughters. The family farm has embraced agritourism and direct marketing over the past five years, looking for another revenue stream for a smaller farmer to compete in the dairy business.

"Farming is really weather-dependent. Ag tourism is even more so," Jennissen said, adding he's learned the importance of educating visitors about the farm. People often have misconceptions about issues such as antibiotics and animal husbandry, he said. "Their perceptions are huge, but it is really easy to change those perceptions when they're here and they can see it and hear you talking about it," he said. "Of course they wouldn't come here if they weren't already friendly."

Redhead Creamery has been doing tours for about five years now, and Jennissen estimated the farm has had about 50,000 visitors since then.

Jer-Lindy has just over 200 Holstein cows, of which about 180 are milk-producing cows. The Jennissens began farming with 32 Holsteins from a $92,000 USDA loan in July 1979. Given the past five years of dairy prices, Jennissen told reporters it's been difficult to stay in business. Stearns County, where the farm is located, is the top dairy county in the state, by far. In 1979, the county had 1,600 farms. This year, the county will drop to under 400 dairies.

"In a tough environment, you try to cut your costs. You don't spend much. We have a long list of things we would like to replace," Jennissen said.

Jennissen said he has mixed feelings about the new Dairy Margin Coverage (DMC) program at USDA. He joked, "I hope the payments are coming, because I've already written the checks on it."

The DMC program is more generous than what dairy farmers had under the Margin Protection Program (MPP) in the past farm bill. When asked if he signed up for the maximum coverage for dairy farmers producing 5 million pounds or less, Jennissen said, "The math was clear." But he added a little caution about what the DMC might mean over the next five years as well.

"There has to be a balancing act of how much the government will support you and how much it will drive increased milk production. If the government support is above your cost of production, and I fear that it might be now, I fear at the end of this farm bill, we will have a lot of milk production and then the next farm bill won't be as friendly."

Enrollment for DMC began June 17 and the first payments started going out July 11. Already, the program has paid out more than $158 million, based on weekly USDA reports.

As the larger farms keep getting bigger, smaller dairies look for different ways to compete and keep the next generation on the farm. For the Jennissens, that has led to the artisanal cheese business.

One of the Jennissen's daughters, Alise, came home from a 4-H trip to Wisconsin when she was 16 and told her parents she wanted to run the dairy one day, but not milk cows. Instead, she wanted to make cheese.

At the University of Minnesota, Alise took a curriculum built around making cheese while adding some business and marketing classes. With her husband, Lucas Sjostrom, also working in the dairy industry, Alise took marketing jobs at dairy processors in Vermont and Wisconsin and continued working on making cheese. In 2012, she approached her parents about plans to add a cheese operation to the family dairy. They raised seed money and produced their first batch of cheddar cheese in 2013. They began marketing their product in fall 2014.

"She has been making cheese full time since 2014," Jennissen said.

Alise Sjostrom's cheeses have been recognized in both national and international competitions, and Redhead Creamery also opened a gift shop as the farm expanded into agritourism. Most of the creamery's sales are in the Twin Cities, but it also has a distributor in Chicago.

The creamery started a small celebration called "Curd Fest" in 2018 to celebrate National Dairy Month in June that was marketed only on Facebook. The event drew about 700 people, so the creamery expanded a little bit and 1,200 people showed up. Jennissen hopes to expand the event next year as well.

Still, despite the creamery's growing business and recognition, Jennissen said it's also basically been a break-even operation. In the last five years, the creamery has made its payments, but has not produced any extra income at this point.

"That seems to be changing, looks like it is changing," Jennissen said. He later added thoughts from him and his wife. "Linda and I are thinking our investment just might pay off and she (Alise) will make big bucks and buy the farm, but not milk the cows."

The low-price environment also has meant that succession planning has been on hold for a while. "Over the last five years, succession has not moved because there was no future," he said.

At $17.55 per hundredweight (cwt), the Class III milk price in July was higher than it has been since November 2014. The price has inched upward all year and is $3.45 higher than a year ago.

Gary Wertish, president of the Minnesota Farmers Union, said in a separate interview that at least one dairy farmer told him last week that prices had finally returned to a break-even point.

"That's good, but it doesn't make up for the back losses," Wertish said. "There's still a lot of concern out there because the hole that they dug and how much equity the farmer has. We're still hearing reports of people just giving up, too, and don't see a light at the end of the tunnel."

Besides Jer-Lindy, journalists last week also toured 2-year-old, state-of-the-art, 9,500-head Riverview Dairy just west of Willmar, Minnesota. The biggest dairy producer in the state, Riverview has 10 locations across Minnesota and collectively milks about 82,000 cows. The company has about 300 investors, including employees. The operation, with a 106-head milking parlor, is a well-run operation, filling up nine trucks a day of milk to process into cheese.

In neighboring Wisconsin, leaders with the Wisconsin Farmers Union have pushed the conversation on supply management. The group led "Dairy Together" this spring with seven events around the country focusing on various supply management options.

Wertish said his membership is not completely sold on the idea, but is willing to listen.

Wertish said he is concerned the new model of production will be like Riverview, and the number of dairy farmers in the state will keep declining.

"They are in a completely different playing field than the family farmer, and it's frustrating because we are losing family farmers across the nation," Wertish said. "So we have farmers getting out because they can't cash flow, and that structure keeps growing and putting more milk on the market and makes it harder for the smaller farmer to compete."

Artisan cheese and agritourism are part of that competition, but as Jennissen pointed out, the main driver of his operation is still daily production from his cows. Jennissen sees the potential to become more efficient producing pounds of milk.

"My goal is to try to get more milk out of my cows than a dairy like Riverview is getting," he said. "They have a low-input system. My personal view is I can beat them at that, and I have got to lower my debt all of the time."

With a continued push by his family to build the cheese business, Jennissen said he would like to see the farm eventually be not so reliant on federal support.

"I would like to get our business to a point where it is farm-bill proof, and that's the goal," he said. 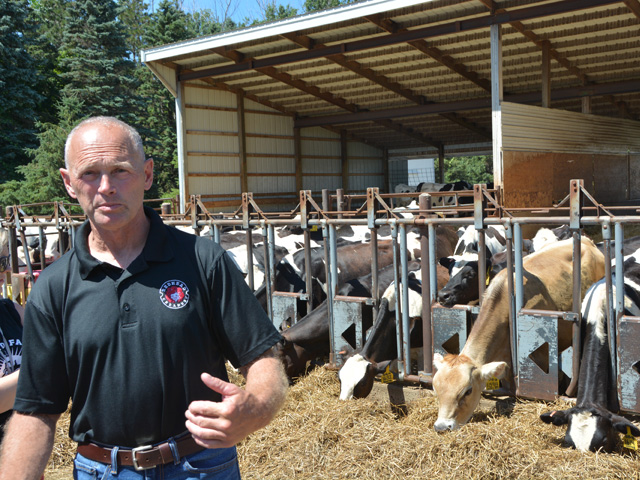