Overnight trade was slow and corn is a bit higher early Friday after having fallen 34 cents from the high set Monday. While some decent rains have fallen in the Northern Plains and northern Corn Belt the past few days, the outlook for the 6- to 15-day portion of the forecast is for mostly dry weather. Ahead of that, a cold front is expected to bring some decent moisture to much of the central Corn Belt Sunday to Tuesday. Following very stressful hot weather for two more days, temperatures do cool off ahead of the majority of corn pollination, but some early pollinating corn has had to endure 95- to 100-degree heat this week. According to the National Oceanic and Atmospheric Association (NOAA) this June has been the hottest June in recorded history. The U.S. corn supply remains a huge unknown, with many analysts calling for a sharp drop in both yield and production from the last USDA report, but the lack of demand is glaring. With Brazilian corn offers on an FOB basis having fallen to just 30 to 35 cents over spot futures compared to U.S. Gulf corn values of 70 to 75 over, Argentine corn is also said to be roughly 70 cents per bushel cheaper than U.S. corn. Export sales last week, at just 7.9 million bushels, were under the weekly amount needed to reach USDA's projection for the fifth time in six weeks. Total commitments are now 16% below year ago levels. New-crop corn exports are at a 14-year low. Ethanol plants are likely to cut back on production in coming weeks as margins are at the lowest level in four years due to the price of corn and slack exports. Ethanol inventory of 23.4 million barrels is the highest since 2010. Despite the lack of competitiveness in export markets, interior corn basis in the Eastern Corn Belt continues to be very strong, with 80 over bids recorded in parts of Ohio, as end users seek to pry old-crop corn from the hands of producers. Funds remain long an estimated 123,000 contracts of corn, after having sold another 16,000 contracts on Thursday. Look for the $4.20 gap area to be the next support on December corn. The DTN National Corn Index closed at $4.17 on Thursday, with an average basis of 8 cents under September.

Soybeans are leading the way higher early Friday morning, as November beans continue to trade within a $8.93 to $9.20 range. U.S.-China trade talks are at a standstill and the two sides are said to be still far apart. While the soy crop has had to endure some very hot temperatures in July and especially this week, the forecast cools down, and NOAA's extended forecast is for cool and wet conditions in August -- beneficial to the soy crop. Like corn, the demand side of the equation is bothersome. Last week's export sales on beans were a paltry 4.7 million bushels (mb) of old crop and 7.3 mb of new crop. Total commitments remain down 16% from a year ago, but with just seven weeks left in the crop year, the U.S. still has 253 mb of unshipped sales. The Federal Reserve is scheduled to meet on July 30-31 and futures markets are now projecting a 100% chance of a .25 basis interest rate cut. Managed money funds still hold a net short on soybeans of just north of 60,000 contracts to begin Friday. Look for November soybeans to respect the 50-day moving average at $8.96, with a close below that likely leading to further pressure, while the $9.20 to $9.30 area will be one of great resistance. The DTN National Soybean Index closed at $8.12, reflecting an average basis of 70 cents under August.

All three wheat markets are modestly higher to begin after plunging from Monday highs. All of the markets are trading below their 50-day moving averages, with Kansas City September threatening to break down, with the 20-day average having crossed the 50-day to the downside. Weather on Friday appears to be clear for a rapid expansion of winter wheat harvest, while spring wheat conditions continue to flourish. Both Minnesota and North Dakota ratings at 80% and 85% good to excellent, respectively, are likely to rise even further Monday following plentiful rains traversing the Spring Wheat Belt. Trade sources report low protein hard red winter (HRW) wheat is now trading at 80% to 85% the value of corn into southern Kansas feed areas, threatening corn demand. Wheat export sales last week were 12.8 mb, and total commitments in the new year, are now 287 mb versus just 236 mb last year. Totals are 22% higher, but recently U.S. wheat has become uncompetitive compared to aggressive EU and Black Sea wheat exporters. IKAR -- the Russian consultancy -- dropped total grain production by another 2 million metric tons (mmt) to 121.4 mmt, but Russian wheat production, despite the recent heat wave, remains near record large levels. The world has no shortage of wheat and U.S. exports early in the year will be challenging. The DTN National HRW index closed at $4.11, and the average basis is at 22 cents under September. 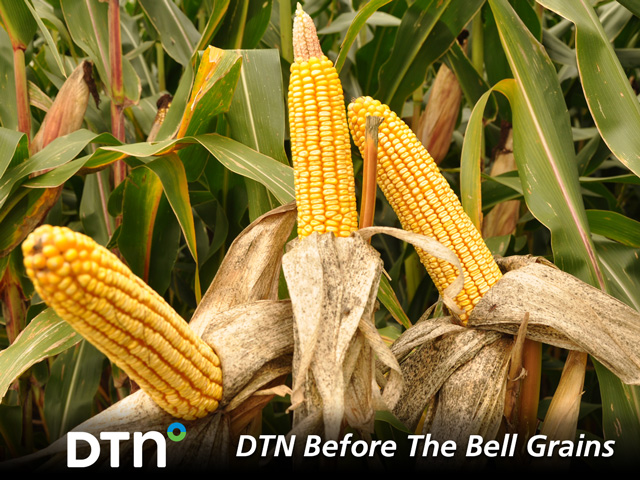