COLUMBIA, Mo. (DTN) -- University of Missouri (Mizzou) research has shown that soybeans entering the reproductive phase are most vulnerable to injury from dicamba.

That reproductive time is now across the major production areas, according to the latest U.S. Department of Agriculture (USDA) Crop Progress and condition reports. Dicamba applications are ongoing in many states due to a late planting season and rule changes.

"When (soybean) plants start to flower, they are most susceptible to yield loss (from dicamba)," said Mandy Bish, University of Missouri Extension weed specialist. "There's still a lot of dicamba being sprayed.

"Neighbors need to communicate with each other to find out what's planted where and come up with a game plan," she continued. "Applicators must follow the buffer and wind speed rules and even shut down spraying earlier than the label requires. Two hours before sunset may not be sufficient during weather that favors temperature inversions."

Soybean planting occurred well into June or even July in some cases. Only 7% of Iowa's soybean crop was in bloom as of Sunday, July 7, according to USDA. That's 10 days behind the five-year average.

Six percent of Missouri's soybean crop is in bloom, according to the latest crop progress and condition report. Illinois is even less at 2%. Soybean progress is below average in most states.

Some states, like Iowa, follow federal label rules dealing with application timing. States with earlier dicamba application cut-off dates extended the time to spray due to the lack of suitable spraying days and delayed planting. For example, Illinois extended its June 30 cutoff date to July 15 for June-planted soybeans. Oklahoma filed a special local needs label to allow for in-crop dicamba use for 90 days after planting cotton and 60 days after seeding soybeans.

"If soybeans are flowering or in a later stage, people need to understand the yield loss due to injury can be much greater," Bradley said.

"It is important to note that not all dicamba injury results in yield loss," Bish said.

Bradley expects more herbicide options and flexibility for farmers in the future, including additional soybean traits with three-way tolerance.

A new University of Missouri study reveals farmers need to consider their cereal rye cover crop seeding rate in order to achieve the most effective weed control. Research shows seeding rates of at least 50 pounds of cereal rye per acre are required to suppress waterhemp, and preferably even higher.

When planting into green cover crops, research indicates farmers should wait to apply residual herbicide until cover crops start to deteriorate after burndown and soybeans reach to the V2 to V3 stage to be the most effective.

Dicamba-injured soybeans do not attract more insects, so there is not a greater increase in yield loss, research indicated.

University of Missouri entomologist Kevin Rice said Japanese beetle populations won't increase this year due to extensive rainfall and flooding, but injury thresholds could be reduced due to short plants.

Stink bugs may cause more problems this year since they like later-planted soybeans and late-maturing pods, Rice said. 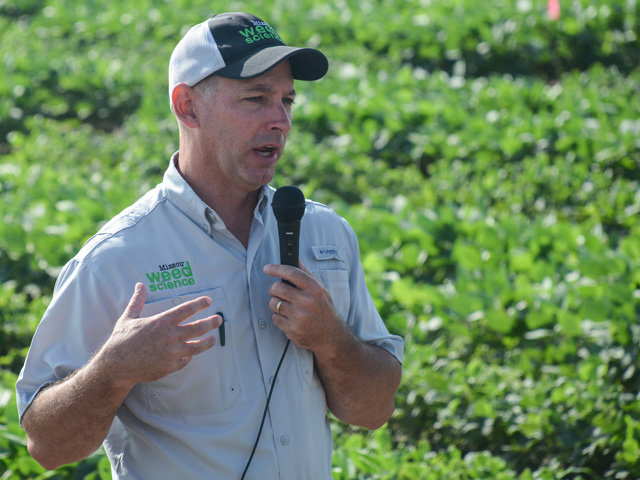