The index, which DTN assembles from more than 3,000 cash corn bids from across the country, has increased 89 cents from the low it hit in mid-May. While the market has seen declines of that size in recent years, it outpaces the rallies from harvest lows seen last year and in 2016-17.

"The main thing about this rally is that there is still serious reason to possibly expect higher prices because the situation is for real," DTN Lead Analyst Todd Hultman said.

U.S. farmers are likely to claim a record number of prevented planting corn acres as the soggiest spring in decades kept them from the fields. Much of what did get planted was planted late, which will likely also reduce yields.

"Ending stocks at the end of the year could be significantly lower than even USDA estimated on Tuesday (June 11). That's what really underpins and makes this move different than anything that we've seen in a long time," he said. USDA forecast 2019-20 corn ending stocks at 13.68 billion bushels (bb), 1.35 bb lower than its forecast last month.

The Great Lakes region, Illinois and eastern South Dakota have seen some of the strongest cash price moves, gaining 85 to 95 cents or so over the past month. Prices in Iowa, Minnesota, North Dakota, Kansas and Missouri are also up by about 65 to 75 cents.

"I think given their especially wet conditions this year, and the fact that Illinois to Ohio seems to be the heart of the problem area this year, it's no surprise that they're getting a little extra boost in their corn price," Hultman said.

They're also likely to see a greater increase in basis values due to the region's higher demand and greater access to the river transportation system.

DTN Cash Grains Analyst Mary Kennedy said ongoing flooding and a lack of barge movement from north of St. Louis to the Gulf is another factor in rising cash prices.

"While many river terminal basis levels remained flat through the flooding, the need for corn at the Gulf for previous commitments has pushed prices higher. Railroads have faced issues as well due to flooding over tracks in the Midwest. And on top of all of this, farmers in flood areas have been unable to transport corn," she said.

Much of the Eastern Corn Belt is in line for more rain next week, DTN Senior Meteorologist Bryce Anderson said. "Our DTN forecasts call for total rain of 2.25 inches to over 3 inches from Illinois through Indiana and Ohio during the next eight days ending Saturday, June 22. The scary feature is that the upper-air pattern is showing a redevelopment of the same trough west-ridge southeast configuration that we had in May, when the skies opened up."

While crop production concerns are the primary driver of the corn market rally, Hultman said other factors lend their support to the trend continuing higher.

"I don't think we've seen strong participation yet from noncommercials and we don't have strong confidence in production estimates yet, which is probably part of the reason holding them back," he said.

Brazil and Argentina also had large crops, and USDA expects them to export a combined 68 million metric tons (mmt) in the current 2018-19 marketing year, an increase of about 20 mmt, or about 800 million bushels, from last year. Hultman said he expects the U.S. to lose some export opportunities to South America as price dynamics change.

While those sales shift origins, USDA anticipates global ending stocks of corn to decline for the third straight year, which Hultman said is also constructive for corn prices.

Then there are things that are hard to quantify into prices, such as the fact that corn ending stocks have never been this low when soybean stocks have been this high or the volatility introduced by trade policy negotiations with Japan, Mexico and China.

"As bearish as things were looking in April and early May, this is just a huge turnaround in market sentiment," Hultman said. "It wouldn't be surprising to see a choppy summer, especially since we don't have a good handle yet on acres and we certainly don't have a handle yet on what yield will be. There are a lot of moving parts this year. It's a little more of a challenge." 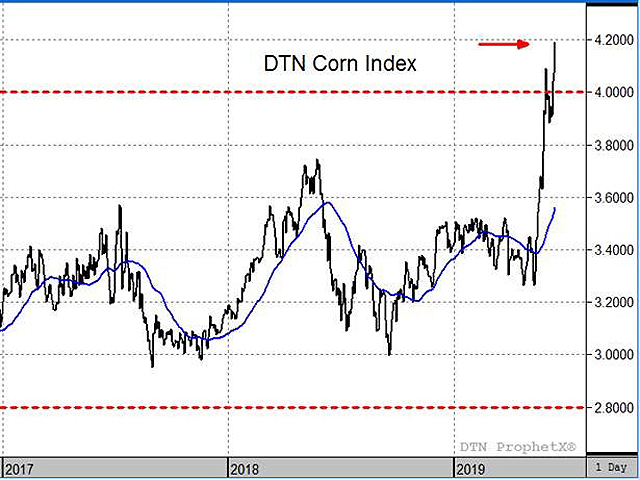