ROCKVILLE, Md. (DTN) -- Scientists have found populations of European corn borer in Canada that are fully resistant to the Bt trait Cry1F, sold under the brand name Herculex I.

So far, the discoveries are limited to the Maritimes region, specifically Nova Scotia -- where single-trait Cry1F hybrids were used. But all corn growers who still rely on single-trait corn hybrids, such as Herculex I and Herculex XTRA, are at risk, scientists told DTN.

Farmers in both the U.S. and Canada should check with their seed dealer to see if they are using or have access to pyramided corn hybrids, which add additional corn borer traits such as Cry1Ab (YieldGard Corn Borer) or Cry1A.105 + Cry2Ab2 (YieldGard VT Pro).

Representatives from Corteva Agriscience, which owns the Cry1F trait, told DTN that single-trait Cry1F hybrids will not be sold under any Corteva seed brands in Canada by the 2020 season -- but they could not speak for other seed companies. In the U.S., use of single-trait Cry1F hybrids is still occurring in "minimal quantities" in "scattered pockets" of the country, said Clint Pilcher, global biology leader for Corteva.

In addition to checking with your seed supplier, growers can use the Handy Bt Trait Table from Michigan State University to check which Bt traits they're using: https://lubbock.tamu.edu/…. The Cry1F trait is sold under multiple brands by many seed companies via licensing agreements.

Here are corn hybrids known to contain only Cry1F to control corn borer:

Remember that if you are still using a single-trait hybrid, you are required to plant a structured 20% non-Bt refuge.

However, scientists from the University of Guelph, who confirmed the Bt-resistant corn borer populations in Nova Scotia, are already investigating another case of unexpected corn borer injury outside of this region, said Tracey Baute, an entomologist with the Ontario Ministry of Agriculture, Food and Rural Affairs.

The Canadian scientists are urging all growers to be on the lookout for corn borer injury this year, Baute said. Even corn hybrids that have two corn borer traits could be compromised if one of the traits is Cry1F, since scientists don't yet know how widespread this type of corn borer resistance is, she said.

The problem is most farmers are not always watching for corn borer injury, Baute noted. Decades ago, corn borer was a major economic pest of corn -- and it still is, for non-GM corn growers. But for the past 20 years, the pest has been so well controlled by Bt traits that a generation of farmers have grown up not having to scout for it, Baute explained.

"We've all relaxed our monitoring for this pest, and now we have to go back to the drawing board," she said.

Corn borer populations are on the rise in parts of the Corn Belt where non-GM corn production is increasing, noted Michigan State University Extension entomologist Christina DiFonzo. "But I don't get the impression that a lot of people are walking through their corn scouting for it, or know exactly what traits they are planting for it, so [resistance] could be going under the radar pretty easily."

Growers may need to reacquaint themselves with the signs of corn borer injury in corn, which include finding shot holes in corn leaves, "frass" (insect excrement) from the larva tunneling holes into the stalk, broken tassels, stalks falling over and ears dropping on the ground before harvest. See more details from this guide here: https://extension.entm.purdue.edu/….

Corn borer is now the second corn pest to develop resistance to the Cry1F trait in recent years. Two years ago, scientists from Michigan, Ohio, Indiana and New York reported Cry1F-resistant populations of western bean cutworm, as well. That pest has now been removed from Cry1F's marketing language, and the Handy Bt Trait notes what regions growers should expect to use non-Bt controls for this pest.

The Handy Bt Trait table will be updated soon with the confirmed corn borer resistance to Cry1F, DiFonzo said. In the meantime, entomologists are urging growers to add the pest to their scouting regimen once again and notify university Extension offices if they find unexpected damage.

"We need to get back in touch with the corn borer," DiFonzo said.

For more information on the discovery of European corn borer resistance to Cry1F in Nova Scotia, see this article from the Canadian Corn Pest Coalition: https://www.cornpest.ca/….

Read more from a U.S. perspective on the discovery from DiFonzo: https://www.canr.msu.edu/…. 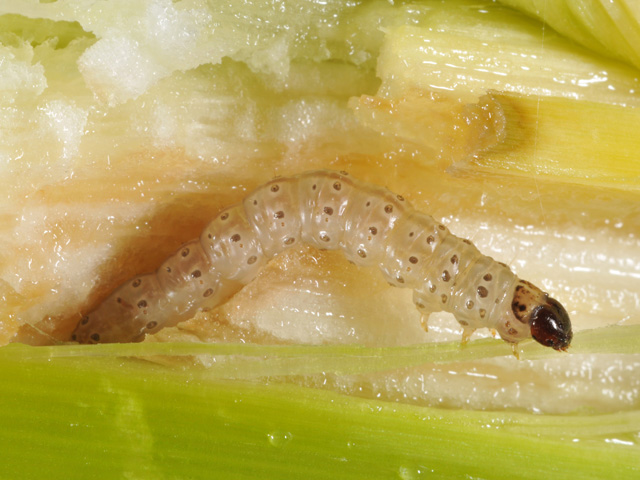