Scouts stopped at 200 fields in southwestern and south-central Kansas.

Nonetheless, scouts found fields with yield potential well above last year, when most of the state saw significant drought conditions. Most routes' yield estimates came in 10 to 15 bushels above 2018.

With wheat prices as low as they are, acre abandonment remains a serious question, however. Many scouts reported seeing wheat fields sprayed out with glyphosate in western and south-central Kansas, in preparation for planting to a different spring crop. "That's an indication that harvest area may be considerably lower than planted acres," said Kansas State Extension wheat and forages specialist Romulo Lollato.

The same could be true in other wheat states. Mark Hodges, of Plains Grains Inc., said Oklahoma's winter wheat crop is expected to yield an average of 37.4 bpa, with a projected total production of 119 million bushels.

"Abandoned acres are projected to reach 8% to 10%, but that could easily go higher," Hodges said. "With the price of wheat the way it is today, we are concerned it will get hayed, grazed out or go to cotton. Some of it is being actively sprayed out right now."

The effects of late planting this past fall were still visible in Kansas, with scouts seeing crop stages ranging anywhere from jointing to boot stage. The lingering effects of dry conditions earlier in the spring appeared in some boot stage plants, starting in west-central counties, said Lollato. "When we were opening the heads, sometimes we would see many bottom spikelets were gone," he said. "These regions didn't get as much rain as the rest of the state. So we will see some fields with smaller heads than usual."

"We're just beginning to see the first signs of rust infections taking hold in south-central Kansas," he said. Both leaf and stripe rust pustules were spotted by scouts touring this region of the state, though most infections were light.

Wheat streak mosaic was also on crop scouts' radar, as the past two years have produced significant infestations in the western Kansas wheat crop. But the viral disease, which is spread by the wheat curl mite, was not very visible on the tour. Education efforts on controlling volunteer wheat, which hosts the mite, as well as variety resistance has helped the curb the disease's spread this year, said Gary Millershaski, a farmer in southwest Kansas and Kansas Wheat commissioner.

Nitrogen and other nutrient deficiencies surfaced in many fields and are likely to be the result of denitrification, cold temperatures and lack of input use due to low wheat prices. "We have seen some issues this year due to the economic situation, so some people have not topdressed," Millershaski said.

Sulfur deficiency symptoms also jumped out at Lollato as he piloted a car through the south-central counties Wednesday. "At the levels we were seeing, it is already taking a toll on yield," Lollato said. "If it warms up, the organic matter in the soils will start to mineralize or decompose, and that will release some sulfur and alleviate it a little bit, but some affected plants are already smaller and have fewer tillers."

Although scouts saw some signs of mild freeze damage, the state has mostly escaped a damaging late-season freeze so far -- although that could change. "We really hold our breath at this time of the year because we are entering the stage of wheat when heads can be very damaged by just a few hours of very cold temperatures, which adds all sorts of volatility to yield potential," DeWolf said.

Thursday, the tour will briefly explore southeastern Kansas before heading back to Manhattan for a final discussion of the wheat crop's estimated yield potential and crop production projections.

She can be reached at Emily.unglesbee@dtn.com 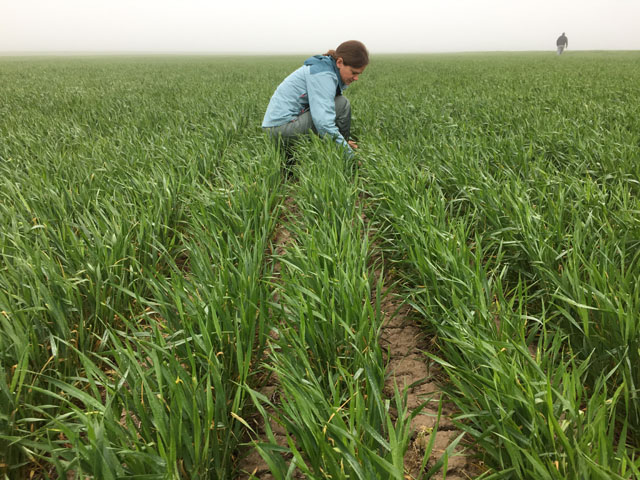