BELLEVUE, Wash. (DTN) -- Delegates to the National Farmers Union annual convention here on Tuesday maintained the group's commitment to addressing climate change, but they rejected a proposal that it become involved in the Green New Deal that some Democrats in Congress have proposed.

The NFU, the nation's second-largest general farm organization and the most Democratic-leaning one, has long been involved in the climate change debate and has shown more willingness to address the issue than most other farm groups on the grounds that carbon sequestration and other farm practices offer farmers opportunities as well as challenges.

NFU's rejection of the Green New Deal reflects the backlash it has created in rural America.

This year, state delegations brought policy proposals on the Green New Deal, regenerative agriculture, and climate change to the convention, and the NFU's policy committee combined them into a document that did not endorse the Green New Deal as written but did use the term.

The proposal said: "The Green New Deal is a bold proposal to transform our society, but as it stands, the resolution appeals to an urban voter base and does not recognize the essential contribution of rural America."

The proposal continued: "We need to have a seat at the table as the Green New Deal framework is being developed. National Farmers Union policy supports no less than 30 individual positions that align with the core values of the Green New Deal."

But delegates from states such as North Dakota and Montana, as well as California, did not want to be associated with policy and phrasing that has been promoted by Rep. Alexandria Ocasio-Cortez, D-N.Y., and others viewed as on the left of the Democratic Party.

As Ryan Taylor, a delegate from North Dakota and former Democratic state legislator and gubernatorial candidate, put it, "The Green New Deal is polarizing language."

Instead, the delegates turned to a proposal from the Minnesota Farmers Union that said, "In order to empower family farmers to lessen the negative impacts of climate change, NFU supports policies, collaborations with consumers, and efforts throughout the agricultural value chain." (See the final climate change proposal link below.)

Not all delegates agreed. One Wisconsin delegate said that NFU should get together with "these energetic young legislators" who are "driving the discussions" and influence them on policies that affect farmers.

Republicans have pounced on the Green New Deal and the most-overreaching elements of its advocates. Last weekend's Conservative Political Action Committee (CPAC) conference was filled with lines about Democrats wanting to ban cows or hamburgers.

Sen. Chuck Grassley, R-Iowa, one of the Senate's most ardent defenders of biofuels and wind turbines, took to the Senate floor to criticize the Green New Deal on Tuesday and pointed out the reference to Franklin Roosevelt's original New Deal.

"Just like the original, the Green New Deal sounds like really bold action," Grassley said. "But it's really a jumble of half-cocked policies that will dampen economic growth and will hurt jobs. Everything our government ought to be trying to do is to encourage economic growth and to create jobs."

Several Republican senators are lined up Wednesday to condemn the proposal on the Senate floor.

Some farm groups have responded by denouncing the Green New Deal. The Iowa Cattlemen's Association issued a statement last week citing that "eliminating meat consumption would only have a very minor impact on the environment."

"In fact, removing all livestock and poultry from the U.S. food system would only reduce global greenhouse gas emissions by less than one-half of 1%," said Mark Deppe, CEO of the Iowa Cattlemen's Association.

While debate rages over the Democrats' climate proposal, some farm groups continue working to highlight the low-carbon benefits of cropping practices. Just this week, the American Coalition for Ethanol, National Corn Growers Association, Minnesota Farmers Union and the Natural Resources Defense Council all submitted comments supporting a $25 million USDA pilot project to test and measure soil carbon sequestration. Famers involved in the project will be paid to implement practices that sequester carbon and improve soil health.

"This demonstration project will help justify our work to position corn ethanol as part of the solution to policies at the state and federal level aimed at reducing greenhouse gas emissions," said Brian Jennings, CEO of the American Coalition for Ethanol.

The American Farm Bureau Federation also released a Market Intel report Tuesday on agriculture and greenhouse gas emissions. Agriculture equaled about 9% of U.S. emissions by economic sector in 2017, but that data doesn't reflect the emission reductions by carbon sequestered in grasslands and forestry. Agricultural emissions have risen, but those emission numbers don't reflect the growth in U.S. agricultural productivity.

Frank Mitloehner, an animal-science professor and air-quality Extension specialist at the University of California-Davis, reached out to Ocasio-Cortez's team about agriculture and the Green New Deal after seeing social media posts late last month about "farting cows" that drew a great deal of attention.

"I appreciate her interest in climate-change mitigation, but the 800-pound gorilla is the use of fossil fuels, and I told her that even the notion of cow flatulence makes this whole thing sound silly, and that's not what we need this discussion to be," Mitloehner told DTN in an interview.

Mitloehner got a call from staff at New Consensus, which operates as an outside group for Ocasio-Cortez and others promoting the Green New Deal. Mitloehner said the focus on livestock and agriculture in general not only drifts away from the debate about fossil fuels but highlights one more attempt by urban policymakers to try to tell farmers how to do their jobs.

The discussion needs to shift, Mitloehner said, because farmers and livestock producers can bring far more to the table when it comes to carbon mitigation and growing renewable energy.

"Currently, we have all kinds of people from urban centers who are leading the discussions. They tell farmers what sustainability is, and tell farmers how to farm who have never set foot on a farm," Mitloehner said. "They have never set foot on a farm, never had soil from the farm on their hands. Yet they are driving the discussion, and that is driving me insane."

The Green New Deal, the way it was rolled out and the leaders behind it have largely added gas to a fire in rural America. Farmers are largely cognizant of the debate around climate change, but resist being accused of adding to the problem.

"Most farmers are very negative about the whole discussion around greenhouse gases and their contributions," Mitloehner said.

Mitloehner said he told Ocasio-Cortez's New Consensus staff, if they were serious about making changes, they can't turn their backs on farmers. At the same time, Mitloehner added that farmers themselves need to be more at the forefront of the conversation about climate change.

"I want to turn frustration into renewed energy into encouraging the farm community to own the topic. This is not a cuss word," Mitloehner said. "This I what they do. Sustainability is what they do day in and day out. So don't let it get hijacked by people who use it to throw arrows at you."

The risks of long-term climate change show increased challenges to food production while the global population keeps rising. The latest National Climate Assessment cites that climate change will "alter the stability of food supplies and create new food security challenges for the United State as the world seeks to feed 9 billion people by 2050."

Mitloehner noted, "I think this is a danger to the national security of our country and the food supply chain that supports all of us." At the same time, he said, "What's really important is the finger-pointing stops, that farmers are explained to what this is all about and they become open to it." 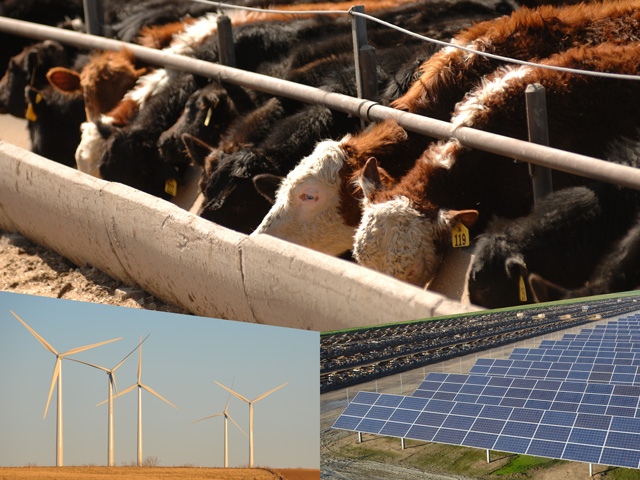