KANSAS CITY, Kan. (DTN) -- A clear line was drawn in the sand between those who support and those who oppose the proposed revision of the waters of the United States, or WOTUS, rule, during an EPA public hearing held here on Thursday.

Agriculture and other industry interests came out in support of the rule they say will provide more certainty for farmers and ranchers and make it easier for water-challenged regions to complete important drinking water projects.

On the flip side, many concerns were raised by environmental, health and public interest group representatives that lifting federal protections for isolated wetlands and some streams would have a detrimental effect on drinking water.

"The 2015 WOTUS rule was a complete and total disaster," Steve Nelson, president of the Nebraska Farm Bureau, said during his testimony.

"It was never about clean water, it was about expanding the role of the federal government. America's farmers, ranchers and other landowners shouldn't need a team of attorneys and consultants to tell them what they can and can't do with their property. This new proposal eliminates regulatory uncertainty brought by the 2015 WOTUS rule."

Nelson, a farmer from Axtell, Nebraska, lauded the new rule for representing the "historical role of the federal government" as a partner with states in regulating water and said it "respects states' rights" to regulate water.

"All of us want clean water; water is the lifeblood of our state," he said.

Despite calls for expanded federal jurisdiction over waters from supporters of the 2015 rule, Iowa Farm Bureau President Craig Hill said it was time farmers receive credit for being stewards of the environment.

"We have every intention to leave the resources in better condition for the next generation," Hill said during his testimony.

"Farmers and ranchers want clean water and clear rules," Hill said. "Farmers are concerned about federal rules about water. It determines what they can and cannot do on the land. Because of the potential for large fines, it's important for farmers to be able to tell what is jurisdictional in the Clean Water Act. Farmers should be able to look at land and tell what's in and what isn't."

The EPA launched a 60-day public comment period on the rule. The comment period is set to expire on April 15. The agency held a public hearing, also in Kansas City, on Wednesday evening. The proposed rule makes a number of key changes to the definition of WOTUS that are important to farmers.

Only wetlands that are adjacent to jurisdictional waters would be considered to be a water of the U.S., essentially removing isolated wetlands from jurisdiction. In addition, the new rule would continue to consider impoundments as jurisdictional.

However, the newly proposed rule would require less downstream mitigation work to account for damming streams.

For rural residents in north-central Missouri, the proposed rule could make it less costly to provide a much-needed drinking water source.

County government and engineering representatives involved in the Little Otter Creek Lake project in Caldwell County came out in support of the new rule at the public hearing.

The region has sustained five droughts in the past 40 years. Most recently in 2018, three communities came within weeks of running out of drinking water.

During the past 17 years, county officials have continued to work on acquiring property and obtaining permits to complete the reservoir, which is expected to provide at least 1.2 million gallons of water daily. County voters approved a 0.5% sales tax to help fund the project. The project expects to break ground within the next couple of years.

John Holmes, a civil engineer working on the project, said during the public hearing the new rule would help reduce the costs of the reservoir project. That's because mitigation is a sizable cost.

"The proposed rule would result in an 8% decrease (in jurisdictional streams) from the 2015 rule," Holmes said.

"In the last 11 years, we have spent $13 million on band aids to connect to existing water supplies," he said. "We are all for clean water, but the costs of these projects are enormous."

Bonnie McGill, a postdoctoral researcher for the Kansas Biological Survey, said EPA should leave in place the significant nexus test found in the 2015 rule. The significant nexus test relied on science to determine whether a water body as small as a tributary headwater physically or chemically affects a larger navigable water such as a river or lake.

"I lived in Flint (Michigan) during the water crisis, and I've lived in areas where water nitrate levels were three times higher," McGill said during the public hearing.

That water crisis first began in 2014 when Flint officials changed the city's drinking water source from Lake Huron and the Detroit River to Flint River. As a result of poor water treatment, lead leached from lead water pipes, exposing more than 100,000 residents to poor water quality.

"The proposed rule does not allow nature to do the work for you," McGill said. "Headwater systems are not allowed to provide benefits."

She said what has happened in Iowa is an example of why wetlands and headwaters need protection.

"Iowa has lost 90% of its wetlands," McGill said. "Iowa is now fourth in floods, and billions of lost dollars. The 2015 rule was much simpler. It should be based on science and not preference."

"Drinking water systems have the burden of cleanup," she said. "Only a handful of industries benefit from a free pass to pollute waters."

"The agency should withdraw this proposal," she said.

"We are deeply concerned with the rule," she said. "The rule is inconsistent with science." Winters said headwaters are a key to sustaining river basins and fisheries.

"Science should be guiding this rulemaking," he said. "You should explain why the changes are necessary. The difference in this rule is it is removing a number of jurisdictional waters. Removing waters and wetlands could have the unintended consequences of telling people they don't need protections." 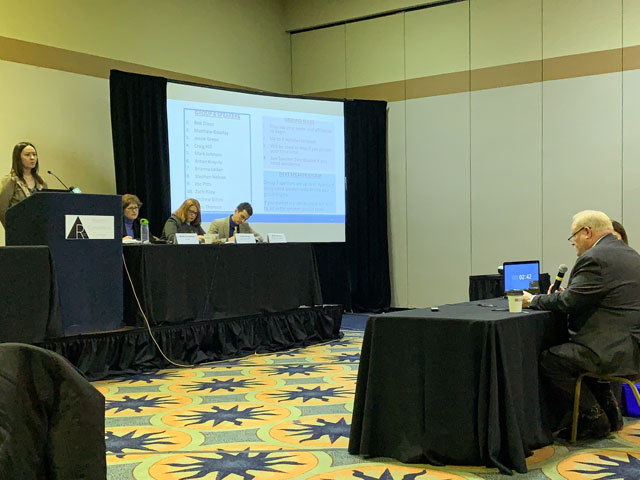