ARLINGTON, Va. (DTN) -- USDA expects U.S. farmers to plant only 85 million acres of soybean acres in 2019, down 4.7%, thanks to falling commodity prices and ballooning stocks amid a trade war with China. Corn acres are projected to take over most of those lost bean acres and rise 3.3% to 92 million acres this spring.

Johansson presented a fairly gloomy outlook for grain farmers, with net farm income dropping to $66 billion in 2018, down 28% from the 10-year average. While farmers' debt-to-asset ratio remains fairly stable at 13.5%, debt financing has risen sharply in the last few years, reaching 25% of net farm income in 2018, Johansson said.

The continued trade war with China featured heavily in Johansson's presentation, as it contributed to some of the most spectacular moves in the soybean market in recent history. Specifically, soybean prices dropped 20% after retaliatory tariffs essentially blocked sales to China in 2018. In total, U.S. exports to China dropped more than 90% last year.

Overall, U.S. ag exports are expected to drop $1.9 billion to $141.5 billion in 2019, with Chinese exports down an additional 6%. As a result, China will fall to fifth in the U.S. market place this year after being the number one market in 2017.

Soybean prices are not expected to recover quickly from this situation, with carry-out stocks expected to grow 472 million to a record 910 million bushels this marketing year. "The record-high stocks in the U.S. due to the trade situation will take several years to unwind, which will weigh on U.S. prices going forward even with potential China purchase agreements," Johansson said.

He estimated that soybean prices will edge up 2.3% to an average price of $8.80 per bushel this year. "Our current estimates show that prices for soybeans are likely to take at least until the 2020 crop year to recover," Johansson said. Corn prices are also expected to creep up 1.4% to $3.65 per bushel. At 92 million acres, corn planting will near its record height of 94.1 million acres in 2016, when the price ratio for production also favored corn.

Wheat acres are not projected to pick up as many lost soybean acres as expected, Johansson said. Winter wheat acreage is expected to be the lowest since 1909, with fall seedings dropping by 500,000 acres in Kansas, 200,000 in Oklahoma, and 170,000 in Nebraska in 2018. Wheat prices on average are expected to rise 1% to $5.20 per bushel this year.

Cotton acreage is expected to continue to expand again in 2019, up 1.1% to 14.3 million acres. Driven by this growth in production, cotton prices are projected to drop 6.9% to $0.67 per pound this year. "Global economic conditions and trade barriers with China will be significant uncertainties for the cotton market in the coming year," Johansson said.

With such little growth in commodity prices, USDA is keeping a close eye on farm bankruptcies, which have risen in key agricultural states such as Nebraska, Kansas, Wisconsin and Minnesota in 2018. Nationally, the rate remains fairly low at 2.35 bankruptcies per 10,000 farms, Johansson said.

Livestock and dairy markets are also reeling from the trade war. After retaliatory tariffs on U.S. dairy and pork landed in 2018, hog prices dropped 20%. Johansson did not comment on the likelihood of those tariffs being removed, and only stated that if they are, dairy and hog prices will likely recover in 2019.

Milk prices are expected to see a modest recovery in 2019, with prices rising 6.5% to $17.25 per cwt. However, because growers will also run into slightly higher feed prices, farmers should expect only slightly higher profit margins this year.

Editor's Note: USDA will release more detailed reports on projected production for crops and livestock on Friday. Watch DTN Ag News for more stories and analysis on the numbers. 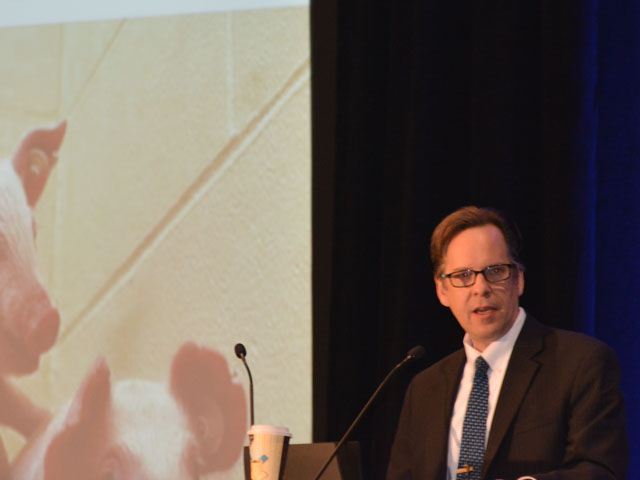