OMAHA (DTN) -- Agriculture and environmental groups alike are not impressed with USDA's interim final rule on wetland conservation and highly erodible land posted in December. A public comment period on the rule closed on Tuesday.

USDA made revisions to codify technical portions of the existing agency policy that had not undergone public review and comment. The revisions amend four sections of USDA's regulations.

Agriculture groups, in particular, made the case in public comments that USDA has not followed proper procedure on the regulations from the get-go, and it is making an already confusing situation worse for farmers.

"Farm Bureau is extremely troubled by this rulemaking due to the fundamental lack of transparency and due process it affords farmers and ranchers," AFBF said.

"Highly erodible land and wetland conservation regulations are not incentive programs. Rather, they are compliance regulations that not only impact participation in farm programs but also directly influence the ability of farmers and ranchers to secure vital operating loans. Many AFBF members are forced to participate in USDA conservation compliance programs, meaning they are not eligible for farm programs or crop insurance premium discounts unless they comply with USDA requirements, which over time has proven to be an increasingly difficult and unpredictable endeavor."

"But from these programs' inception, USDA has avoided providing farmers the certainty and due process they need and deserve to be able to determine the extent of their legal obligations and rights under the programs," AFBF said.

A 2018 U.S. Department of Justice memo indicated federal agencies may not rely on guidance to enforce violations of law. Read that memo here: https://www.justice.gov/…

"Yet this is effectively what USDA has been doing, by its own admission," AFBF said. "USDA contends that this rulemaking is only attempting to 'codify many technical portions of the existing agency policy that have not undergone public review and comment.'"

AFBF said changes finalized in the interim rule were not just technical, but are "substantive and will directly impact eligibility of program participants."

USDA needs to recognize that prior-converted cropland is not just farmed wetland, AFBF said, but that it is no longer a wetland and shouldn't have been treated that way by the Food Security Act.

The National Council of Farmer Cooperatives agreed with AFBF that USDA's actions may be in violation of the Administrative Procedures Act, which requires public comment periods prior to enacting laws and regulations.

"NCFC disagrees with USDA's characterization of this rulemaking as a simple update to 'guidance to improve consistency and timeliness' when implementing Swampbuster," the group said in public comments. Swampbuster is a provision of the Food Security Act of 1985 that discourages the conversion of wetlands to cropland use.

"What is being done in this rulemaking has far more importance and effect than an update to guidance. It is turning into law guidance that has evolved over the last 30 years, which has only grown more complicated and controversial during this time. Moreover, these guidance provisions have never been subject of a formal rulemaking under the Administrative Procedures Act."

AFBF further said that the agency has "newly added discretion" to decide a decades-old map is not enough to uphold a certified determination. The AFBF also expressed concern about several newly added terms and definitions that expand the farmland wetland category by making it easier for USDA to designate land as a farmed wetland.

"As a result, the rule substantively changes what land qualifies as prior-converted cropland or commenced-conversion wetlands under the statutory exemptions, to the detriment of farmers that have relied on prior interpretations," the group said.

"We represent producers who encounter highly erodible land and wetland conservation compliance regulations as a regular part of their farm operation and management decisions," the groups said.

"Wetlands management has been an issue in North Dakota since the passage of the 1985 farm bill. While we understand protection of wetlands is mandated by law, we ask for a more commonsense approach to wetlands management in working with NRCS."

The groups also called for more farmer involvement in the process.

"Improvements could be made to allow farmers meaningful involvement in the wetland and highly erodible land determinations process by proposing rules through public notice and comment, and offering responses to the comments received," they said.

"Cooperation with NRCS can be a key component to successful farm management and profitability. However, we know regulatory uncertainty, delay of process, complex procedural requirements, and inaccurate wetland determinations that lead to lengthy and costly appeals cause frustration and result in agency distrust among our producers."

"We oppose any efforts to use a rolling data set that would adjust the identification of wetlands based on precipitation cycles that represent conditions wetter than those considered normal at the time Swampbuster was enacted," they said. "We encourage the agency to be more transparent with the data it relies on in making its determinations of 'normal climatic conditions.'"

"If this data set was updated to encompass the most recent 30-year cycle, the definition of normal circumstances would change every 10 years and could potentially give cause for redoing hundreds of thousands of certified wetland determinations for minimal change," the commission said in public comments.

"This would be a waste of public resources and detrimental to the conservation service assistance provided by USDA to agricultural producers to help them improve the productivity and sustainability of their operations."

In comments sent to USDA on Tuesday, thousands of National Wildlife Federation members asked the agency to withdraw the interim final rule.

The NWF said the rule "promotes the exclusion of seasonal wetlands from the farm bill's wetland conservation compliance safeguards, encouraging additional wetland drainage in the Prairie Pothole Region and beyond."

The group called for USDA to propose a rule that "promotes accurate wetland determinations" to include all seasonal wetlands. 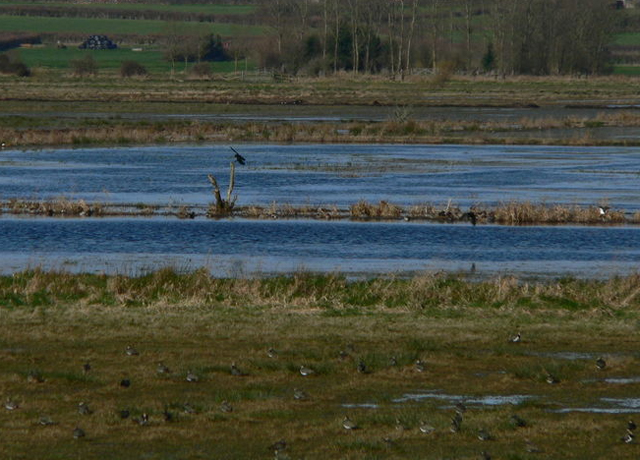