The U.S. stock market indices are weak with the Dow futures down 575. The interest rate products are higher. The dollar index is 22 lower. Energies are lower with crude down $1.80. Livestock trade is mostly lower. Precious metals are mixed with gold $4 higher.

Corn trade is a penny lower at midday lower overnight with trade seeing pressure from soybeans and outside markets. The weekly export sales are delayed until tomorrow. Outside markets have the dollar a little lower but bigger pressure offsetting that with big losses in the stock market and January Crude almost high $50. Ethanol margins remain poor. Corn basis should likely fade with a firmer board the past week. On the March chart we have jumped over the 20,50, and 100-day moving averages at $3.77-$3.79, which is our chart support area with resistance at the upper Bollinger Band at $3.88.

Soybean trade is 3 to 5 cents lower at midday after trading down around 15 cents overnight/early this morning. Meal is fractionally lower and soybean oil is down 15. South American continues to make good progress with rains expected for Argentina, and Brazilian private production estimates moving towards 130 million metric tons, and more talk about further acre expansion in the future. Basis will provide signals on the quantity of nearby cash business getting done with flat to slightly firmer trade so far this week. January support was at the weekly low at $8.99 1/2 but we tested it this morning dropping to $8.97 and now back near $9.10 at midday. Resistance is at the Monday high at $9.35.

Wheat trade is 2 to 3 cents lower on the March contracts at midday with some spillover pressure from the row crops. Australia confirmed their smallest crop in a decade. Russian exports have showed signs of slowing down, but Ukraine shipments have resumed around the Azov Sea. Market bears argue without a pick-up in our export sales rallies will continue to have trouble even with some friendly news around the globe with bulls suggesting exports will see improvement in the coming months. The dry areas of Europe are expected to catch up on moisture in the near term. Egypt has delayed shipment on recent purchases, but it is not expected to be a lasting issue. Iraq bought some U.S. wheat. On the March Kansas City chart support is at the lower Bollinger Band at $4.82 with resistance at the 20-day at $5.00

David Fiala is a DTN contributing analyst and the President of FuturesOne and a registered adviser
He can be reached at dfiala@futuresone.com
Follow him on Twitter @davidfiala 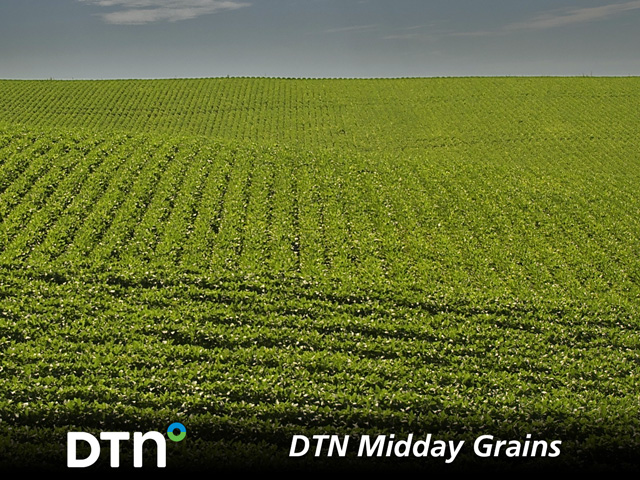