MOUNT JULIET, Tenn. (DTN) -- Mother Nature dropped 18 inches of rain on Charles Cannatella's Melville, Louisiana, farm in September. When he finally got back in the combine last Friday, his soybeans average about 10% damage from all of the moisture.

That's not unusual for a rainy harvest season like this one, but with this year's market dynamics, that damage level is more than the export elevators farmers in his area rely on will accept.

Bunge and Zen-Noh Grain export facilities are only taking pre-contracted soybeans, and even then, Bunge will only accept beans with 7% damage or less. Zen-Noh will only take 8% or less. Louis Dreyfus will buy beans without a contract, but only if damage is 5% or less.

The discounts are steep -- sometimes more than triple typical levels.

"Five percent damage used to run us 6 to 8 cents deduction. It's $1.81 a bushel today. That's pretty dismal," Cannatella's said. "There are a lot of crops left in the field and no place to go with it."

Cannatella said he's fortunate to have grain bins and plans to store the remaining 25% of his harvest while he waits for better market conditions.

"Most people don't have any (bins) because we're at the end of the line," he said, referring to the proximity to Gulf of Mexico. "So when we harvest, we load straight onto a ship and it goes around the world. But this year, it's a different story. We don't have a market," he said.

Business at the Port of New Orleans is much slower than usual for this time of year due to the lack of sales to China, making the bad hand dealt by Mother Nature worse. Elevators in Louisiana, Mississippi and Arkansas are filling up with soybeans that don't meet export grading standards, leading to sky-high discounts as grain companies search for better quality beans.

For farmers, it's a devastating hit to the bottom line that's forcing some to leave soybeans in the field to rot. Lost bushels are lost business for the region's elevators, and experts fear if heavy rains persist in the Midwest, the situation could grow worse.

From May to June, a hot and dry weather pattern pushed Arkansas's soybean crop to maturity much earlier than expected. Delays in rice planting meant farmers were trying to harvest three crops at once -- rice, corn and soybeans -- and unfortunately, some of those beans had to wait.

"I've always said that once the soybean crop is ready to harvest, there's nothing good that can happen to it until you haul it off in the truck to the elevator. That's kind of what's happened this year," University of Arkansas extension soybean specialist Jeremy Ross said.

The rains came, robbing yield and quality. Ross said a farmer enrolled in the state's annual yield contest began cutting a field two weeks ago that averaged 93 bushels per acre with 2% damage or less. The rains delayed the farmer from harvesting the rest of the field for more than a week. When he returned, yields dropped to 87 bpa and damage levels surged above 10%.

"That just kind of shows that in just a week's time you can take a significant hit and damage," Ross said. "The longer these beans are out in the field and being weathered on, the worse they're getting."

Ross said later-planted soybeans look better and should have fewer quality issues, but elevators may run out of storage before those beans leave the field.

"They're getting very few loads of No. 2 beans that they can put straight onto a barge to ship down, and most of the storage facility is being taken up by these this bad quality beans," he said. No. 2 soybeans are considered to have 3% damage or less.

When facilities fill up, they shut down.

While Arkansas farmers have considerably more on-farm storage than their Louisiana neighbors, most use it for rice and corn. Ross said farmers are scrambling to free up bin space, hoping that once the glut of harvest passes, discount schedules and basis levels will improve.

In Arkansas, the typical discount of 5% damage in soybeans is 22 cents. Now, it's ranging from 50 cents to $1.20 depending on where farmers deliver.

Mark Lambert, Arkansas Farm Bureau director of commodity activities and economics, said while the quality of this year's crop is below last year and below what's typical, "it's not as bad as it seems to be just because of what is going on with the slow movement out of New Orleans. Right now there are some problems, but they've been amplified because of the lack of demand."

Last year, Hurricane Harvey made a wet harvest in Louisiana worse, but the export elevators were able to adapt to the damage levels, said Greg Fox, a grain marketing specialist with the Louisiana Farm Bureau. Louis Dreyfus dropped its basis to 5 cents over futures, but would only accept 20% damage or less. Zen-Noh lowered its basis to 25 cents under futures, but would accept anything that came across its scales. They had boats to put it on and higher quality soybeans coming downriver to help blend with damaged beans to meet export standards.

"So you can somewhat compare this year and last year damages, and the biggest factor that we're missing is we don't have the export business consistently at our docks to help blend off this moderate damage that we're looking at this year," Fox said.

Tariffs took a bite out of basis, but it wasn't until the extent of crop damage and the lack of business became clear that basis dove to historic lows.

Fox said basis from January to May ranged from 29 to 40 cents above futures. That range dropped in June, when the tariffs were announced, to 14 to 30 cents over. By mid-August, basis levels dropped to 20 cents below futures. In September, basis tumbled to 50 cents or more below futures.

Basis levels grow higher further inland. Fox said farmers trying to find a home for soybeans with 10% damage could truck to the northern edge of the state to find an elevator that would accept them, but they'd still be looking at significant discounts and negative basis.

"We're at the point where it would be nice to see a discount schedule and be able to dump in some areas where we're just not able to deliver it all," said Louisiana Farm Bureau national affairs director Kyle McCann. "We're the canary in the cage, and we have sniffed the gas."

With heavy rains battering parts of the Corn Belt, McCann and others worry discounts could spread and Midwestern farmers could feel a similar pinch. At the same time, they're relying on higher quality shipments from the Midwest to help blend off this year's damage.

"If demand picks up and we have good things coming down from the Midwest, we have blending opportunities and things can move at that point, but that takes some time for all that to take place," Fox said.

In the meantime, without any place to go, soybeans could be left standing in the field.

With basis running 50 to 70 cents below futures and discounts running well over a dollar, farmers are facing cash soybean prices that begin with $6 or $7.

Because he farms in hurricane territory, Cannatella is no stranger to lost crops.

"You're lucky you get by with your life and your home's not destroyed. You lose a crop. You start over again," he said of hurricane damage. "But to have a crop in the field, and it's a good crop, and not to be able to deliver just because we've got some damage is mind boggling. It's unheard of."

As farmers call up their crop insurance agents, Arkansas Farm Bureau national affairs director Matt King said he's been talking to USDA. Farmers that opt not to harvest their soybeans will miss out on the agency's 83-cent per-bushel trade assistance payment.

"There are obviously going to be a lot of areas unharvested because they did not have a market for it. It wasn't that they didn't have production," King said. He said he hopes USDA considers the net return to the farmer for future portions of the aid package.

McCann said concerns are starting to grow that some farmers won't be able to repay their loans and get loans for next year if they can't harvest the crop, miss out on the trade assistance payment and they don't get enough from crop insurance.

"We've had that come up a lot," he said. "Will they even be able to survive this? 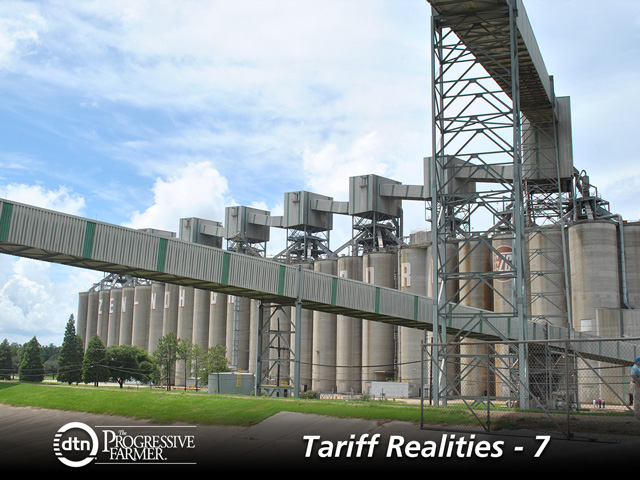