On Aug. 1, 2007, at 6:05 pm CDT during rush hour in downtown Minneapolis, the I-35W bridge collapsed, sending cars, construction workers and trucks in to the Mississippi River below. A school bus carrying 63 children was also on the bridge, sitting precariously on a portion of the bridge that did not fall into the river. All the children were rescued but in the end, 13 people were killed and 145 were wounded.

It was a miracle that the death toll was as low as it was, given that within the hour before the collapse, traffic was heavier. This was partially due to baseball fans driving downtown for a Minnesota Twins game that evening. Also, at the time of the collapse, four of the eight lanes were closed for resurfacing, which had many cars finding different routes in and out of downtown.

On Jan. 15, 2008, the National Transportation Safety Board (NTSB) announced it had determined a design flaw as the likely cause of the collapse, noting that a "too-thin gusset plate" ripped along a line of rivets, and additional weight on the bridge at the time contributed to the catastrophic failure.

The I-35W bridge collapse sparked immediate calls within the state of Minnesota, as well as across the country, that the federal government must step up and invest funds in repairing and replacing the nation's aging and crumbling infrastructure, including bridges.

The collapse of the I-35W bridge was not due to deferred maintenance or neglect noted the NTSB. In fact, at the time of the collapse, construction had been taking place in the weeks prior, which included joint work and lighting replacement, and concrete and guardrails.

According to Wikipedia, there were 575,000 pounds of construction supplies and equipment on the bridge. The NTSB said that because of that design flaw, the additional weight on the bridge at the time contributed to the catastrophic failure.

Since the collapse, at least 120 of the 172 bridges identified as structurally deficient or fracture critical in Minnesota have been repaired or replaced. According to National Public Radio (NPR), Minnesota also stepped up and improved bridge inspections, and now sometimes uses drones to take photos and video of spots on bridges that are difficult for human inspectors to reach. The state now gets outside independent peer reviews of bridge design plans and has revamped its bridge maintenance worker-training program.

Here is a link to the report card, which also breaks out grades for each state in all infrastructure categories: https://www.infrastructurereportcard.org/…

At the National Grain and Feed Ag Transportation Summit in Washington, D.C., on July 25, two state Department of Transportation (DOT) directors spoke about the lack of funding for the U.S. roadways and said that there is a great need for dedicated and sustainable funding.

The panel, consisting of Kirk Steudle, Michigan DOT and Tom Sorel, North Dakota DOT, discussed the fact that there is not enough money to maintain the interstate system. They suggested that each state raise their gas tax or registration fees or add tollways.

The American Trucking Association (ATA) has said that it supports a fuel tax as a way to increase funding. On their website, the ATA notes, "Because it is a user fee, the fuel tax is the most conservative, cost-effective and viable solution to making that vision a reality. Ninety-nine cents of every dollar goes directly to road and bridge maintenance, and it doesn’t add a penny to the deficit."

Dr. David Ellis, Senior Research Scientist at the Texas A&M Transportation Institute with the Infrastructure Investment Analysis Program also spoke at the Summit. He said that as far as U.S infrastructure goes, there are more projects than there is money to fund them.

"We had the best infrastructure in the world at one time," said Ellis. Population growth outweighed the ability of many states to keep up with new roads and bridges and repairs. "We need to be smarter and increase funding and change the way we get that funding," he added. He said that state and local governments would have to become responsible by adding fees and also by finding private sector investors.

"We must tell the story to the consumer in a way they understand the monetary cost versus the cost of doing nothing," added Ellis. "Do the maintenance or face the consequences."

In their 2017 infrastructure report card, the ASCE said that at end of 2016, the U.S. had 614,387 bridges (four in 10) that are 50 years or older. The study noted that one in 11 (9.1%) of bridges were designated structurally deficient. The study graded the overall condition of the U.S. bridges a C+. As for cost of repairing and or replacing, ASCE reported in the study that the most recent estimate puts the nation’s backlog of bridge rehabilitation needs at $123 billion.

Washington, D.C. based American Road & Transportation Builders Association (ARTBA) estimates it would take more than three decades to repair or replace the more than 55,000 bridges that are in most desperate need of it.

Those of us in Minnesota who saw the aftermath of the collapse with our own eyes will never forget the catastrophe that took place the evening of Aug. 1, 2007, forever changing the lives of the 145 survivors and the families of the 13 people who died.

Sadly, it appears the federal government has forgotten, as U.S. infrastructure still waits in the back of the long line where federal funds are allocated. 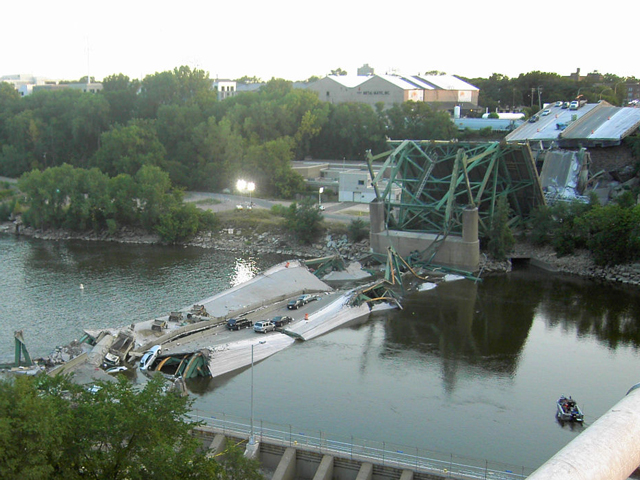