When President Donald Trump first tweeted in early March that "trade wars are good and easily won," I think he may have been onto something. That is, if you allow me to read behind the typos.

Whatever you think about his philosophy of leadership through tweets, the president has developed quite a reputation for colorful and often mystifying typos. Remember the early morning post when he invented the word "covfefe?"

And then there was the time he tweeted about his trip to Israel and the possibility of a lasting "peach." Once, the chief executive lambasted China for stealing a U.S. Navy research drone in international waters, tweeting the affront as an "unpresidented" act.

But who really cares? I mean even world-renown heart surgeons misplace a sponge or scalpel now and then. Furthermore, none voted for Donald Trump because of the way his fingers danced over the tiny keyboard of a smartphone (please, no small hands jokes, not on my watch).

What's important is that despite the occasional typo, misspelling, or missing verb/conjunction, we can usually take a decent, educated guess at what the president's tweet actually means. Specifically, Trump's high level of business success prior to moving into the White House tells me he's no dummy when it comes to the importance of market timing.

Accordingly, I feel confident in speculating that the oft-quoted trade war tweet was just a minor operator error meant to read: "Trade wars are good IF they are easy to win."

Think of the Trump administration as competent and responsible bridge inspectors. They know, at least at their non-political best, critical measurements such as traffic counts, weight limits, the wear of girders and the age of piers. They know when deferred maintenance is affordable and when it is not.

While many of his critics have expressed serious doubt about President Trump's grasp on macroeconomics and global trade, there's little doubt in my mind that he fully understands that the only "good" trade war is one "easy" (read with utmost speed) to resolve.

I'm guessing (hoping? praying?) that despite the president's ubiquitous display of confidence and self-assurance, he hears the alarm clock ticking away, one set for five minutes before the hour when fearless protectionism becomes economically and politically untenable.

If you agree with Trump's assessment of the China problem, it's certainly not difficult to understand his willingness to throw the first punch. With China exporting goods to the U.S. worth more than a half-trillion dollars last year, $375 million more than the U.S. shipped to China, the Chinese economy seems far more vulnerable to a trade war than the American market.

In a nutshell, Trump's trade war tactics to-date are based on the simple assumption that "They have more to lose than we do."

Furthermore, at the risk of sounding too agriculturally defensive, I think the presidential strategy since late spring has been emboldened by China's counter-tariffs against the likes of U.S. beans and pork -- painful jabs thought to be relatively feckless by far too many within Washington's circle of power.

Anyone in the White House who bothers to look at a commodity screen knows differently. Grain and meat futures have been imploding faster than Scott Pruitt's career at the EPA. Additionally, hard trade data for May clearly reflected Chinese buyers moving away from U.S. product and toward other sources unsaddled with punitive tariffs.

For example, U.S. pork exports to the China/Hong Kong region were well below the late spring of 2017 due in part to the additional 25% tariff imposed by China on April 2. Specifically, U.S. exports to China/Hong Kong in May totaled no more than 34,191 metric tons, down 31% from a year ago, while export value dropped 25% to $79.9 million.

The next monthly set of pork trade numbers will likely look even worse, and the same goes for the July summary as Chinese tariffs continue to ramp up through midsummer.

As far as beef exports are concerned, we have not yet documented any discouraging news -- but we will. Effective July 6, China's duty rate on U.S. beef is scheduled to increase from 12% to 37%.

Such a significant surge in the tariff will make it extremely difficult for Chinese end-users to profitably utilize U.S. beef, especially with U.S. beef already priced at a premium compared to imports from other suppliers, and with Australian product subject to a duty of just 7.2% through the China-Australia Free Trade Agreement.

There's really no nice way to put it. U.S. farmers and ranchers have been the first troops casually dispatched to the front lines -- cannon fodder in a trade war that has managed heretofore to bomb under the radar of most American consumers.

But such sweet oblivion enjoyed by the urban mass may soon evaporate thanks to the latest offensive being readied by the Trump high command.

On Tuesday, the White House announced plans to impose a 10% tariff on $200 billion of Chinese goods after a public comment period. That means the tariffs could take effect sometime after Aug. 30, a month before U.S. retailers start the all-important fourth quarter leading up to the holiday shopping season.

Unlike the earlier tariffs by the U.S. and China (which primarily hit soybean farmers, pork producers and manufacturers), the latest effort takes direct aim at plenty of food products and finished consumer goods.

I suppose some consumers could continue to enjoy a honeymoon period with higher tariffs representing nothing more than internet headlines. But, eventually, all manufacturers and retailers will have no choice but to pass the raised tariff charges on to everyday shoppers.

And the new list of Chinese goods to be taxed are anything but the frivolous eye-candy of the rich and famous. For example, the list includes: seafood, dog leashes, handbags, luggage, vinyl floor tile, perfume, golf bags, baseball mitts, furniture, carpets, window and wall air-conditioning units, refrigerators and freezers, buttons and toilet paper.

Assuming this new round of tariffs stays on track, there won't be a single customer that rolls out of Walmart after Labor Day who doesn't have an opinion about tariffs. If this tit-for-tat trade war just keeps sparking, keep in mind that China currently makes roughly 36% of American shoes and clothes and about 20% of our furniture and household items.

So, returning to my original question, can the current trade war be simultaneously "good" (i.e., defined by the president as resulting in smaller trade deficits with China and greater safeguards for intellectual property rights) and "easy" (i.e., won in an acceptable span of time, a period of economic and political hardship that does not overshadow the "good")?

As I previously noted, President Trump's basic strategy is to fully exploit the reality that the U.S. market is more important to China than the China market is to the U.S. Accordingly, the best way to nail the mutually dependent goals of "good" and "easy" is to fire the tariff gun early, aggressively and often.

Furthermore, USDA Secretary Sonny Perdue may be reassuring his boss that China could easily run out of trade war patience if it tries to maintain both its boycott of U.S. beans and the size of its hog herd. While the Brazilian source of beans has proven handy in the short run, it's simply not big enough to satisfy the Chinese pork appetite in the long run.

On the other hand, China's unchallenged one-party one-leader government means Beijing can quickly marshal its vast resources almost at will, much as it did earlier this week when the People's Bank essentially freed up tens of billions of dollars in credit to help smaller businesses and support growth in the face of trade war fallout.

Needless to say, the U.S. president does not enjoy such sway at the Federal Reserve or within the halls of Congress.

Another factor helping China make the trade war difficult for the U.S. rather than easy is the relatively large number of American businesses operating and selling in China. In 2015, U.S. goods and services produced and sold in China totaled $223 billion, compared with a minuscule $10 billion of Chinese products made and sold in the United States, according to Nicholas Lardy, a China expert at the Peterson Institute for International Economics.

China's bureaucracy has hundreds of ways it can slow and expensively inconvenience foreign entrepreneurs. Such activity could represent a damaging new front in the trade war that the U.S. could not counter.

Finally, Chinese consumers may be willing to hunker down longer than their U.S. counterparts. Not only are they victims of an oppressive propaganda machine that would rouse nationalism and villainize the U.S., the vast population of China as a whole remains closer to serious periods of privation than U.S. citizens.

So who will blink first? What's the maximum level of economic pain that will still justify a trade war as "good?" And how many months before the 2020 election does "easy" become too difficult?

All I know is the longer the great locomotive of trade remains stopped in the middle of a critical bridge, the greater the chance of a catastrophe. 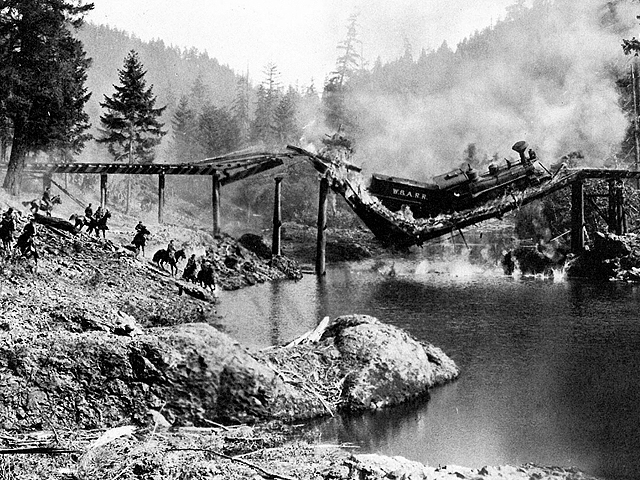