ROCKVILLE, Md. (DTN) -- For many years, advances in crop technology have focused on specific production traits like herbicide tolerance or insecticide production.

Photosynthesis -- the driving force behind all plant life -- was long viewed as too vast and complex to be effectively altered by genetic engineering.

That may be changing, as agricultural biotechnology companies begin work on crop traits that tweak a plant's innate ability to convert sunlight, carbon dioxide and water into grain. Instead of the usual steady creep of yield increases, a quarter or half-bushel at a time over many years, these companies are aiming for giant yield leaps closer to 10%.

Beck's Hybrids has just announced a partnership with an ag biotech company, Benson Hill Biosystems, to co-develop a trait that improves the efficiency of photosynthesis in a corn plant, producing significant yield increases. Beck's says it plans to license the trait broadly to seed companies once it is commercialized, most likely in the mid-2020s.

Another ag biotech company, Yield10 Bioscience, is working with Monsanto to fine-tune a trait that improves photosynthesis in soybeans, after seeing impressive results in canola and camelina.

What's so wrong with plant photosynthesis as Mother Nature designed it? After all, it's successfully driven all plant life on Earth for hundreds of millions of years.

"The photosynthetic process plants devised themselves was built to survive, not to be coddled in a monoculture," he said. "In order to survive, it spends a lot of energy on defense mechanisms, rather than optimally capturing and converting sunlight, carbon and water into more yield. Plants didn't survive to yield more, they survived to reproduce."

That's where ag biotech companies are stepping in.

Using genetic engineering, Benson Hill has developed a trait that allows the corn plant to absorb more carbon from the atmosphere, which translates into more grain.

"It has shown consistent results across three years of trials," Crisp said. "We're seeing upper single-digit percent yield increases in hybrid corn -- it's very compelling." Although the company is still exploring the exact mechanism at work, Crisp said it appears "the trait is concentrating more carbon in the plant system itself and accumulating more sugar, which is translated through metabolic pathways into more biomass -- and yield."

At Yield10, scientists are fine-tuning a new trait, named C3003, which uses a gene from algae that likewise improves carbon fixation in plants. The company has engineered crops like camelina and canola to express the gene, with impressive results.

"Last year, we saw up to 13% increase in canola bushels per acre," Yield10 CEO Oliver Peoples told DTN. "We're trying to prove that the system is robust and predictive and that these metabolic changes in camelina and canola can translate to soybean as well."

THE PATH TO MARKET

Beck's Hybrids, a family-owned and operated seed company that serves farmers in the Midwest and Midsouth, announced its agreement to co-develop the corn yield trait with Benson Hill Biosystems today.

Both Benson Hill and Yield10's traits use traditional genetic engineering, so they will be subject to USDA and global regulatory reviews.

The goal is to submit regulatory documents to USDA by 2021, with commercialization likely following in the mid-2020s, said Curtis Wiltse, Beck's Hybrids' research manager.

"As we get to commercialization, we intend to broadly license the trait to all seed companies in the U.S.," he added. "We really believe it could really bring significant value to farmers."

In December 2017, Yield10 proffered its C3003 trait license to Monsanto, for help with developing it in soybeans. "We want them to work on the technology and develop it within their elite soybean germplasm," Peoples said.

Both Peoples and Crisp remarked on the novelty of smaller biotechnology companies working alongside seed companies to develop this type of yield-focused trait technology.

"We're co-developing this with Beck's, and that's important, because when you're dealing with these complex traits -- there is nothing simple about engineering photosynthesis -- we feel like a true collaborative model is the way it should be developed," Crisp said. "That's not always been the case in ag, where a company often licenses the technology -- throws it over the fence and walks away."

"There seems to be a momentum in the industry to find more collaborative way to do this, so small companies can win as well," Peoples agreed. 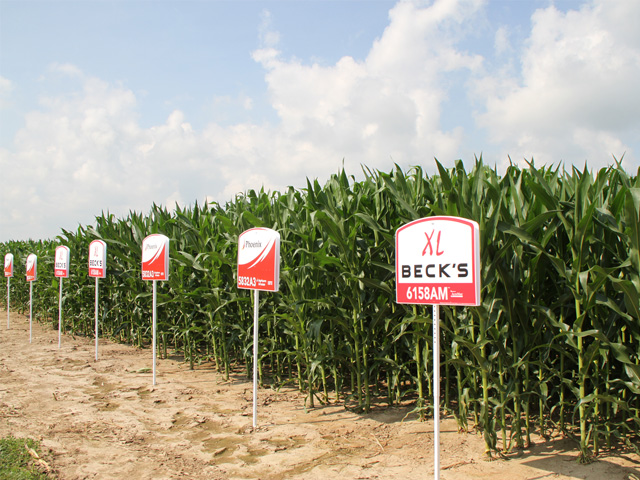