The National Ag Day celebration is generally full of speeches filled with platitudes about farmers, but the proclamation and speech by the vice president elevated the event on Tuesday. Still, there are also several major agricultural issues hanging in the balance this week in Washington, as well, which were addressed by Agriculture Secretary Sonny Perdue.

Perdue, speaking at the National Press Club, noted grain companies and farmer cooperatives are waiting for a tax change in the omnibus spending bill to deal with the Section 199A "grain glitch."

Yet Politico reported from Capitol Hill that Senate Democrats agree to fix the Section 199A as long as the GOP agrees to expand a low-income housing tax credit. House Speaker Paul Ryan, R-Wis., is balking at those demands. The omnibus spending bill that lawmakers hope to use to pass the 199A fix also needs to be approved by Friday.

The biofuels industry, along with corn and soybean farmers, are closely watching the moves on the Renewable Fuel Standard. Perdue said there have been intense discussions about what to do regarding Renewable Identification Numbers (RINs), but no solutions have been reached. Perdue suggested to reporters that President Trump may seek a solution through Congress rather than administrative actions.

"The conversation itself has already been helpful in that area of driving those RIN prices down, but the president's responsibility is to look at the whole economy. But he has asserted several times his commitment to the RFS and an energy policy for this country," Perdue said.

Perdue also talked about trade again and repeated that the White House drive for tariffs is worrying farmers. "We're anxious that agriculture may be the tip of the retaliatory spear again," Perdue said. "Naturally, farmers, when you have 20% of every dollar you make depends on exports, you have a right to be anxious about that."

The Washington Post and other media are reporting President Donald Trump will impose as much as $60 billion in tariffs on China by the end of the week. That could derail more than $22 billion in agricultural exports to China, including $14 billion in soybeans.

Zippy Duvall, president of the American Farm Bureau Federation, said in a brief interview during the Ag Day events that he hopes there is still time to sway the president not to impose new tariffs on China. Duvall said he hoped Perdue and White House agricultural adviser Ray Starling, as well as the U.S. Trade Representative's Office, are all talking to the president about reconsidering his stance.

"I don't think it's ever too late, but I think the door is closing," Duvall said. "China is our biggest soybean market, so this is huge for them. Hopefully, they can bring a little more compromise to this issue."

In his speech earlier in the day, Pence noted Ag Day was started in 1973 by the Agriculture Council of America to celebrate agriculture and encourage young people to consider careers in agriculture. Pence praised the National Association of State Departments of Agriculture, the American Farm Bureau Federation, the FFA, 4-H and other student groups, and noted that he was wearing his FFA tie.

Pence stressed the importance of deregulation to the Trump administration, pointing out that the Environmental Protection Agency is rewriting the Waters of the United States rule. Referring to the estate tax, Pence also said that the new tax law "eliminated the death tax" for almost all farmers. He also said farmers would benefit from tax provisions such as 100% deductibility of new equipment.

Trump, in his Ag Day proclamation, noted the importance of the agricultural economy, including exports.

The proclamation also said that USDA is investing in rural broadband access, roads and bridges and is "supplying affordable, reliable power" to those living on the outskirts of larger cities and towns.

It also said that the Tax Cuts and Jobs Act "is providing much-needed relief to America's farmers, who can now expense 100% of their capital investments, including expenditures for farm equipment, over the next four years. Additionally, under this new legislation, the vast majority of family farms will now be exempt from the death tax." 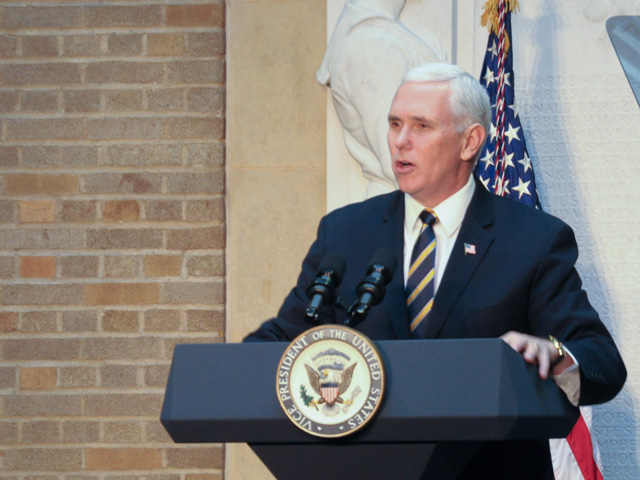