OMAHA (DTN) -- More farmers likely will be filing Chapter 12 bankruptcy in 2018, as they continue to struggle with costs of production exceeding commodity prices, ag lender CoBank said in a new report.

The CoBank report, "Forces that will shape the U.S. rural economy in 2018," said commodity price depression from surpluses around the world will make for another belt-tightening year for farmers who will continue to see working capital diminish.

As a result, CoBank said, more producers are likely to turn to Chapter 12.

"Farmer solvency is an increasing concern in some regions," the report said.

"Wheat and dairy producers are among the hardest hit in this down cycle, as evidenced by an increase in Chapter 12 bankruptcy filings in Kansas and Wisconsin. Chapter 12 bankruptcies, which last year reached the highest level since 2012, are expected to accelerate in 2018 in the absence of a major upward correction in farm gate prices."

Joseph A. Peiffer, an agriculture bankruptcy attorney based in Cedar Rapids, Iowa, told DTN he too expects to see more farmers filing for Chapter 12.

Chapter 12 is designed specifically for farmers with regular annual income and allows them to stop debt collection and establish repayment plans of three to five years with creditors. The law also allows farmers to restructure debt without forming creditors' committees.

Peiffer said the current farm crisis is different than in the 1980s. Back then, the price of land and rent dropped, so farmers could cover production costs, feed their families and maintain a cash flow.

"Today, the price of land has not dropped nearly far enough that the farmer can pay for it," he said. "Remember, the costs of production are not being covered."

As a result, tax creditors will receive the same amount that unsecured creditors receive on the de-prioritized taxes.

One of the issues producers still face when it comes to Chapter 12, Peiffer said, is the cap for total debt on the farm is $4,153,150. This means many farmers are ineligible for Chapter 12 because their debts often are higher than the cap.

"Many exceed it either because their individual borrowing is too high, or they have cosigned debt to help a son or daughter start farming," he said.

"The debt limit is too low in Iowa. However, in many other states, it covers most farmers. Some of my clients sell assets so they qualify for Chapter 12," Peiffer said.

"Many producers still have strong equity positions that enable them to bid aggressively for the limited land that becomes available at relatively low interest rates," the report said.

"The historically low interest rates have also kept institutional investors in the game. Until enough producers lose the financial capacity to expand or investors shy away from low capitalization rates, land prices will remain stubbornly elevated relative to farm income."

CoBank said if commodity prices deteriorate further and the Federal Reserve tightens its monetary policy, those actions would "add a new level of risk to land values and farmer solvency in 2018.

"The continuous rise hints that more financial stress looms in the year ahead," the report said.

Though farm income improved in 2017 as a result of a good year for the livestock sector, CoBank said "farm financial stress will remain a common theme across the countryside."

The report said debt loads continue to climb for farmers as they continue to struggle to cover production costs with lower commodity prices.

"Ag retailers and cooperatives are also feeling the strain, keeping the topic of mergers and acquisitions on the table in co-op board rooms," CoBank said.

"Still, there is room for optimism. While inventories for most commodities are abundant and global competition remains intense, the level of grain and oilseed inventories would be substantively impacted by one poor U.S. harvest. Animal protein and dairy prices could also improve modestly if the forecasted production increases come up short or global demand growth outperforms. Producers will be aggressively seeking cost control options to maintain profitability and will be putting increased pressure on their input suppliers."

As a result, the report said, cooperatives "will be under increasing pressure to provide inputs, productivity enhancements, speed and space and risk management options at lower costs while assuming greater inventory risk."

Though many comparisons to the 1980s farm crisis often are made, CoBank said the current state of affairs is different in a few key areas.

"The industry's balance sheet is still much stronger than during the prior correction," the report said. "During that period, producers were more highly leveraged, interest rates were in the double digits, and commodity prices suffered a faster and deeper correction as foreign demand for U.S. grains cratered. In comparison, producers and lenders in recent years have been more disciplined. The debt-to-asset ratio is currently just over 12% compared to the 20% level that prevailed in the 1980s."

However, CoBank said farm debt relative to income is "creeping closer to the concerning levels of the 1980s.

"This cautious optimism must be tempered by the harsh reality that market conditions could change rapidly and many structural adjustments will be underway in 2018," the report said.

"The sector will experience increasing pressure in terms of cash flow and asset valuations. Market conditions have resulted in a sharp, unsustainable divergence between farm income and farm asset values. The timing and extent of the market's correction will be determined by much more than commodity prices and cash flow, however. The prevailing economic environment, interest rate levels, investor appetite, trade, changes to the tax code, the 2018 farm bill, and the changing regulatory environment will all play a role."

Read about the report here: http://bit.ly/… 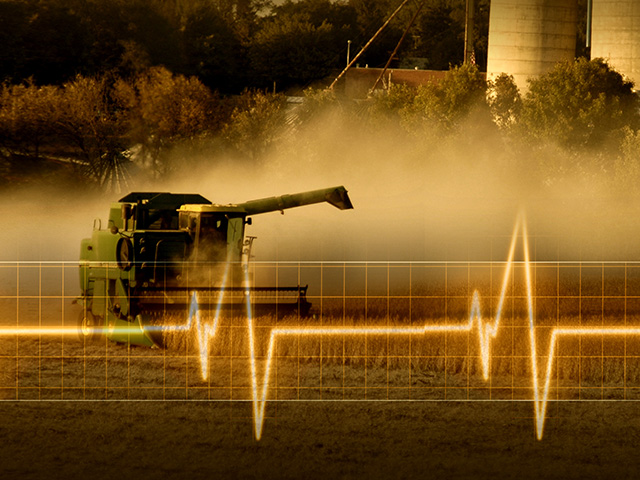