"I'm sinking like a rock," Grant Corley, owner of Corley Seed Co., said, as he recalled a day in 2015 when he nearly lost his life. In the moment before Corley found himself in that quickly worsening situation, he had merely stumbled inside a bin he was vacuuming soybeans from to a truck parked outside at his Westphalia, Kansas, farm.

Using it like a crutch to catch his balance, Corley quickly planted the vacuum down into the beans between his feet. The vac began to dig an ever-collapsing hole at a rate of 6 bushels per minute. In seconds, Corley was up to his knees in a quicksand made of soybeans.

"I tried to pull the vac out, but I couldn't. I just kept going down. I hollered," he continued. But the driver of the truck could not hear Corley's call for help over the rumble of the tractor powering the vacuum. "There was no way I was going to get out of there," he said. Corley saw -- and felt -- the beans rise to chest level before he stopped sinking. "I thought I was gone. I couldn't move," he said. "It happened so quick. It was unreal, and I was scared."

Corley's one piece of luck that day arrived with the Westphalia Fire Department. Loaded onto its truck was a brand-new capability, a grain rescue tube -- and men who knew how to use it.

It was just a year earlier that the department had won the tube in the first Nominate Your Fire Department Contest, sponsored by Nationwide and the National Education Center for Agricultural Safety (NECAS), in Peosta, Iowa. The winner received a $3,000 tube supplied by KC Supply Co., of Kansas City.

Nationwide had a simple reason for creating the contest and organizing a companion Grain Bin Safety Week.

"Simply put, we got tired of seeing people die inside of grain bins," said Paul Stevenson, Nationwide senior risk-management consultant. "As a Fortune 100 company and the No. 1 farm insurer in the country, we knew we could leverage our expertise, a network of partners and other resources to draw attention to this important cause."

Fifty fire departments were nominated in 2014, that first year of the contest and Grain Bin Safety Week. There were more than 300 nominations in 2015 and 641 in 2016. Thirty-two fire departments from 15 states have been awarded grain rescue tubes and training in the four years of the program.

Grain entrapments are no small risk on the farm. There are 10,000 commercial grain sites in the U.S. and 300,000 storage units on farms.

"The combination of low grain prices and surplus grain is motivating farmers to store more grain," Stevenson said. "As on-farm storage increases, so does the likelihood of grain going out of condition and farmers entering bins."

Corn is the grain most commonly associated with entrapments. That is most likely because of the amount of corn grown. But it has happened with many grains -- soybeans with Corley, and, in one incident in Canada, it was canola. Twin sisters, aged 11, and their 13-year-old sister died after they were buried in canola when they were playing in the back of a loaded grain truck.

Modern grain unloading augers move at least 2,000 bushels of grain an hour and, often, several times that in the largest grain systems. At these rates, the average man can be covered in corn within 11 seconds.

"It takes only a matter of seconds to be consumed by a moving grain flow," said William Field, Purdue University professor of agricultural and biological engineering. Field is director of Purdue's Agricultural Confined Spaces program.

A worker can become submerged to the point of being helpless in grain within four seconds, Field said. If grain reaches your chest, suffocation becomes highly likely. If you're alone and still sinking to where grain is covering your head, you might capture a pocket of air with a cupped hand or your hat. But in the end, oxygen may not be the issue.

A person submerged in grain will naturally keep his mouth closed. But the moment a kernel of grain is inhaled into his nose, the victim will involuntarily open his mouth which fills the mouth with grain. Death simply becomes all but inevitable. "Once an individual is entrapped, especially if the occupant has their head covered in grain, then it is no longer a rescue [for the fire department] but a recovery [of a body]," Stevenson said.

There are two things to remember about grain, Stevenson said. First, knee-deep corn will trap a person. Second, consider your attitude about working around stored grain. The "it will never happen to me" mentality too easily leads to entrapment and death. "We would like to see farmers and operators take their time and determine if they really need to enter the bin. We would prefer they do not enter at all," he said.

-- Running auger. The farmer is clearing a blockage in the sump. Instead of turning the auger off, he leaves it running. When the blockage is cleared, the grain starts moving again creating a condition for entrapment.

-- Bridging. Out of condition or frozen corn creates a "bridge" on top of the corn. A hollow area is created below it as corn is removed. If the bridge collapses under the weight of the farmer, he falls into the void and is covered with grain falling in on him.

-- Vertical column. Grain attached to the side of the bin is dislodged and buries the worker inside.

With an operator in the bin, it's imperative to have someone on the outside who knows how to shut down equipment, can identify for rescuers the bin holding the entrapped person and is familiar with the circuit breakers and switches operating the machinery around bins. All circuit breakers should be labeled.

"When farmers do their own wiring, they don't always label what they do," Neenan said. "By labeling breakers, rescuers know what to turn off when they arrive." Or, turn on. An aeration fan might pump a bit of lifesaving air into the grain column.

As an added safety precaution, Neenan said to make a $40 investment in a lockout tagout kit. Lockout devices hold machinery in a safe or "off" position. Tags are prominent warning devices that are attached to a device that warns anyone else from turning on a machine.

The Westphalia Fire Department sent rescuers to the top of Corley's bin equipped with their grain rescue tube. Harnessed to ropes, they were lowered down to Corley. The fire department team pushed the pieces of the tube down around him and removed the grain from inside it. Corley was soon free.

"I think the [Westphalia] fire department used that tube once," Corley said, "and that was with me. I hope they never have to use it again."

Here's a grain-handling safety and rescue checklist based on an interview with Dan Neenan, director of the National Education Center for Agricultural Safety and from the University of Missouri.

-- No one working around a grain bin should be less than 16 years old.

-- Run ventilation fans before entering a bin to remove any toxic fumes.

-- Wear a fall protection harness inside the confined space of a bin. Tie off the harness to a certified rescue rope.

-- Develop a "zero-entry" mentality. Stay out of the bin unless absolutely necessary.

-- If someone becomes entrapped, do not attempt a rescue on your own.

-- In the case of an entrapment, call 911, then turn off the auger or conveyor belt. Turn on fans to increase ventilation.

-- Label all electrical circuits so rescuers can quickly differentiate between pieces of equipment like fans and augers.

-- If you do become entrapped, pull your hat down over your face or cup your hands around your mouth and nose to create an air pocket. 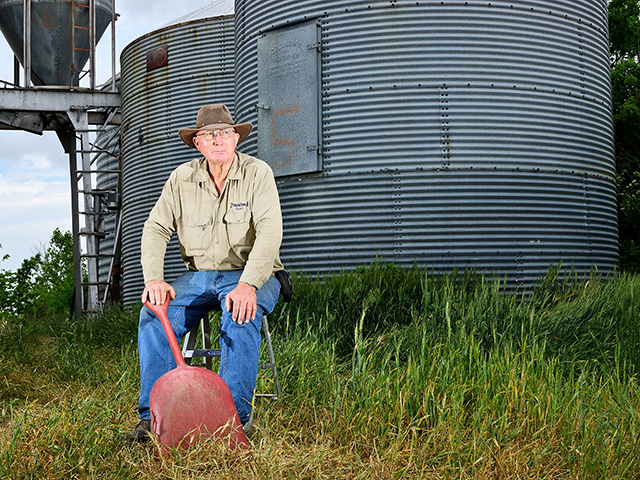