ORLANDO (DTN) -- Former U.S. Agriculture Secretary Tom Vilsack, who this week became president and CEO of the U.S. Dairy Export Council, told dairy industry leaders here Tuesday that they should call their Mexican customers and reassure them that they still want to do business with them.

In his speech to the International Dairy Foods Association's Dairy Forum, Vilsack told his new colleagues, "It is important to recognize that we all have an opportunity and a responsibility to reassure those we work with in Mexico that we will continue to work with them."

Vilsack said he believed that those business relationships "can overcome" other comments coming from Washington -- an obvious reference to President Donald Trump's statements on building a wall with Mexico, renegotiating the North American Free Trade Agreement, a tax on products coming in from Mexico and stricter immigration law enforcement.

Vilsack also told DTN that "it's important for everyone to understand the impact that language can have on sensitive issues such as trade."

IDFA is concerned about the relationship with Mexico because 39% of U.S. dairy exports go to Mexico, or roughly $1.3 billion in products.

In an onstage interview with IDFA President and CEO Michael Dykes, Vilsack also said that he left a 24-page memo for former Georgia Gov. Sonny Perdue, President Trump's nominee for Agriculture secretary. Vilsack added he also had a half-hour telephone conversation with Perdue last week in which they talked mostly about international trade.

Vilsack said he told Perdue that he will need to make the case for agricultural trade because it often gets lost in trade negotiations. Of the 160 to 170 countries involved in trade negotiations, about 150 to 155 have agriculture as the No. 1 economic sector, but that is not true in the United States with its "layered" economy.

Vilsack said he also told Perdue that USDA's budget has been stable or gone down in recent years, and that the farm bill should start with analyzing needs, not a budget number.

Perdue is still waiting on the Senate Agriculture Committee to schedule a nomination hearing.

Vilsack also dismissed President Trump's executive order that departments will be expected to eliminate two regulations for each new one that is promulgated. Vilsack said of the executive order, "Rhetoric is going to meet the reality." He noted that implementing the law on labeling genetically modified foods will require "a number of new rules and regulations."

Vilsack also told the dairy executives that the industry has a harder time than the beef industry in making its voice heard in Washington, because there are a million cattle producers and only 43,000 dairy farmers.

The dairy industry, Vilsack said, needs to speak with one voice, and to "punch above our weight."

At a separate news conference, Dykes said that renegotiating NAFTA could provide the U.S. dairy industry an opportunity to bring up problems it has had with getting products into Canada, but that NAFTA created a substantial market opportunity in Mexico, and the industry is worried its Mexican exports could be endangered.

Further, if the United States negotiates a free trade agreement with the United Kingdom, it will be important for negotiators to say there will be "no concessions" on the use of geographic indicators that the European Union pushed for in the Transatlantic Trade and Investment Partnership or, if there are any GI provisions, that the system provides fairness to U.S. producers, Vilsack said.

"We have to be very vigilant on this" because the European Union has been "very aggressive" on the GI issue, Vilsack said. 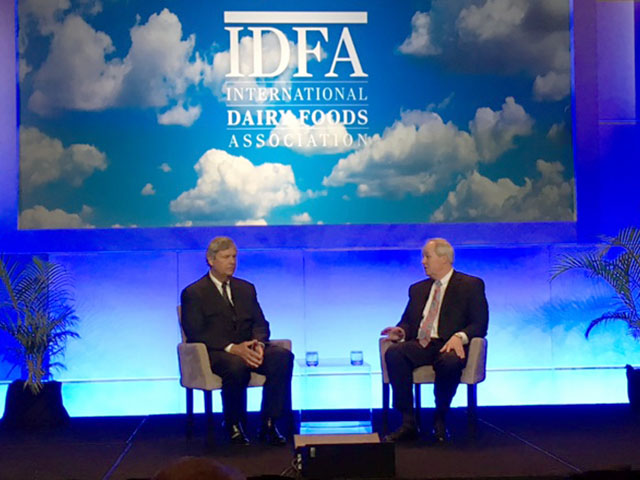