DECATUR, Ill. (DTN) -- Weeds such as waterhemp and Palmer amaranth may not have noses, but they are increasingly thumbing them at chemical controls as if they do. A report from the University of Illinois Plant Clinic shows an increasing number of fields across the Midwest tested positive for resistance to multiple herbicides.

Two years ago, the Plant Clinic began using molecular protocols to test for herbicide resistance to glyphosate and PPO inhibitors (such as Aim, Cadet, Cobra, Flexstar, Sharpen, Ultra Blazer, Valor and others) in waterhemp. Last year, the clinic expanded the service to Palmer amaranth as that aggressive weed has continually moved northward.

"Almost twice as many whole fields were tested in 2016 compared to 2015: 593 vs. 338," said Suzanne Bissonnette, U of I Extension assistant dean for agriculture and natural resources and Plant Clinic director, in a news release.

Bissonnette told DTN the lab adapted testing protocols developed by University of Illinois molecular weed scientist Pat Tranel. "We are able to test a large quantity of material in a shorter period of time because we are strictly a testing lab," Bissonnette said. "This frees up a researcher's time to investigate emerging issues. This testing is expensive and so not all university testing labs are set up to manage the costs and the time."

Fields with plants that are positive for both glyphosate and PPO inhibitor resistance are of particular concern, due to the limited possibilities for control of these weeds, said plant diagnostic outreach Extension specialist Diane Plewa.

Southern states have seen increasing incidence of PPO-resistant Palmer amaranth, but it was new to Illinois this year. "Several samples from southwestern Illinois were confirmed to be PPO inhibitor-resistant (three from Madison, and one from St. Clair counties) in our testing," Plewa reports. The Plant Clinic received samples from 52 Illinois counties that had at least one sampled field that had waterhemp or Palmer amaranth plants that tested resistant to both glyphosate and PPO inhibitors.

However, waterhemp and Palmer amaranth are also known to use metabolic pathways to detoxify herbicides before it reaches the protein it is meant to destroy. Even though more than half of the fields sampled in Illinois did not show resistance to glyphosate and PPO inhibitors, farmers were warned that they should not assume these weeds can be killed by alternative herbicides. In 2016, Illinois populations of tall waterhemp were found to resist five sites of action: ALS inhibitors, Photosystem II Inhibitors, PPO Inhibitors, HPPD inhibitors and Synthetic Auxins (2,4-D), according to the International Survey of Resistant Weeds. (www.weedscience.org)

Glyphosate and PPO inhibitor Summary: 593 field samples representing approximately 2,000 waterhemp or Palmer amaranth plants were tested for herbicide resistance at the University of Illinois Plant Clinic in the 2016 season.

For more information on testing and how to submit a sample for 2017, go to: 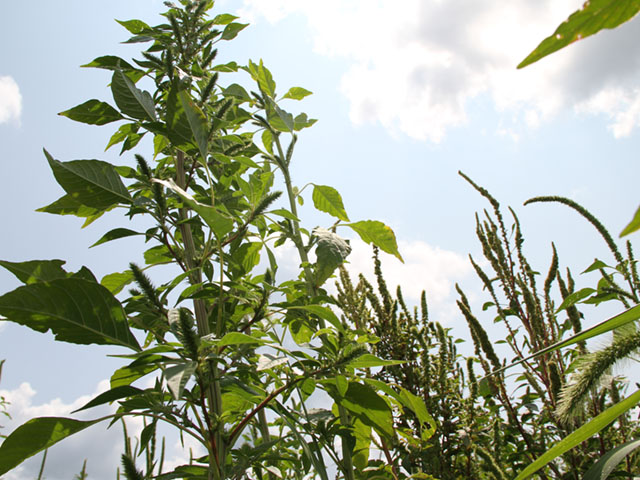