OMAHA (DTN) -- Land values, passing the farm to the next generation, biotechnology and agribusiness mergers are just a few of the major concerns on farmers' minds in 2016.

DTN/The Progressive Farmer polled 1,647 rural residents in the third "The Pulse of Rural America" presidential-year survey featured in the November issue of the magazine. The poll was conducted by Zogby Analytics, Utica, New York, in August. Of the survey respondents, 42% either farm or have immediate family members who farm.

Of that 1,647 people, 65% of the respondents were in the age range of 35 to 69 years old. Fifty-seven percent don't have a college education, while 43% indicated they had a bachelor's degree or higher. Nationally, 38% of Americans have a college degree. Respondents fell evenly across all income levels, from less than $25,000 per year to more than $100,000. Eighty percent of the respondents are white, while 49% are female and 51% male.

Land values and rental rates brought strong reactions from respondents. Asked about this statement, "My farm is profitable given current land prices," 69% of farmers and ranchers somewhat or strongly disagree; 30% strongly or somewhat agree.

"We have bought some land," said Joel Lange, a farmer from Jefferson, Iowa. "But we don't have the equity to continue to buy more."

"We've expanded a lot over the past 10 years," said Tarkio, Missouri, farmer Angelo Erickson. "I was fortunate to buy ground at lower prices. That has helped my balance sheet. But, I'm not too interested in buying more land unless it is right next to my farm."

The cost of land will make it hard for farming families to continue for another generation, respondents told DTN/The Progressive Farmer. A whopping 85% are very or somewhat concerned that land values will affect the ability of their families to farm in the future.

"Competition is always good for the consumer, and, in this case, I'm the consumer," said Mark Ruff of Circleville, Ohio. "As we've seen in the past, products play out, and it takes a long time to develop another one. Without competitive pressures, will the companies keep innovating?" he asked. "But on the other hand, larger companies have the bigger engine to be innovative."

"From a cost standpoint, who's going to cost-check them?" said Josh Krohn of Lamesa, Texas, regarding competition among seed and pesticide companies. "For example, we pay a technology fee. But if we get resistant weeds, why do we still pay a technology fee?"

Farmers and ranchers were asked how they diversify their income. By far the largest group, 51% said they earn additional income off the farm. Another 30% have diversified by adding livestock or poultry to their farming enterprises.

In other income opportunities:

-- 17% sell products directly off the farm through outlets such as farmers' markets;

-- Smaller percentages operate a farm-inputs business, run a direct-marketing enterprise or have invested in renewable energy.

When asked how they used profit in their farming operations, 54% of farming and ranching respondents said they upgraded their equipment and technology. A similar percentage, 52%, indicated they paid down debt. After that, respondents used profits to upgrade their irrigation and drainage systems (21%), upgrade grain storage and handling systems (20%) or purchase additional land (19%).

Another 18% said they produced no profit, and 15% of respondents have curtailed their investments in production, machinery and technology systems.

"Paying down debt has been our big push the last two years," Lange said. But he has also upgraded his farm's grain-storage facilities.

Costs of production, equipment and technology strain the financial resources the most for a quarter of the respondents. Another 12% point to property taxes, followed by the cost of fertilizer, land debt, regulations, fuel, seed and feed. Interestingly, given their response about rental costs, only 5% of respondents said land rent most strains their financial resources.

Ohio's Ruff said he looks to whittle down costs wherever he can, especially for seed and fertilizer. "We apply our own fertilizer, and we buy it in bulk off the river terminals," he said. "We're looking at our soil-test values to see where we can trim [our nutrient costs] and not hurt ourselves in the end."

Ruff is focused on high production levels. "A person who tries to save $20 per bag on seed can hurt themselves well beyond bushels. I don't expect to see seed prices going down, so I'm focused on value rather than cost."

Editor's Note: You can view more about the poll results at bit.ly/2eUF3mm 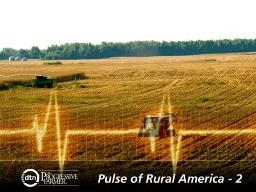